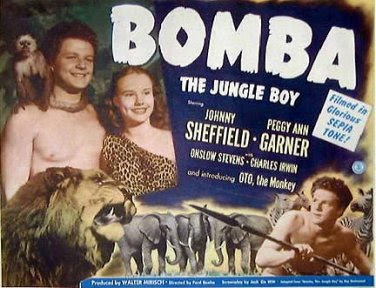 Upon reviewing Ford Beebe's BOMBA THE JUNGLE BOY, I was surprised to find that this Monogram production emulated the classic MGM TARZAN films so well. I recall later entries in the Bomba series-- most of which Beebe directed-- as little more than amiable time-wasters. Interestingly, Beebe was credited with writing-chores on 1929's TARZAN THE TIGER, reviewed here. It's possible that since the producers chose to cast Johnny Sheffield, formerly Tarzan's "Boy" to the MGM Tarzan, they wanted something in the mold of the moneymaking Weismuller franchise.

Given that the BOMBA books take place in South America, while this film takes place in a cinematic Africa, I'm going to guess that the script for BTJB is liberally swiped from 1932's TARZAN THE APE MAN, with most (though not all) of the strong sexuality excised. This means that the heart of the story revolves around a civilized girl being quasi-abducted by a "savage" teenage boy. On occasion there's a hint of sexual awareness between leads Bomba (Sheffield) and amateur photographer Pat (Peggy Ann Garner), despite the script's efforts to keep things on a child-friendly level.

Though the principal characters are the teenagers, two adults are responsible for bringing them together in the jungle. One is Pat's father George Harland, who has come to Africa to seek out rare photographs of animals but who has no actual appreciation for nature or for the African natives. The other is Andy Barnes, a
district commissioner who has emigrated to Africa because he loves the exotic land. The set-up scenes actually devote a fair amount of time to Barnes describing a mysterious region called "the Rift" with so much trepidation that the modern viewer expects it to be filled with dinosaurs. The region is home to Bomba, but neither Barnes nor the natives seem to have any inkling of his presence prior to encountering the leopard-skinned loner.

This dualistic opposition of these two representaives of white civilization mirrors that of the MGM Tarzans, where the ape-man is visited by emissaries of civilization, usually a devout scholar in the company of a greedy scoundrel. Harland isn't a criminal as such, but he's just as much the "Ugly Civilized Man." At one point Harland wants to get close enough to photograph a rhinoceros, and believes that Barnes should be willing to shoot the animal down if it's provoked by his approach. Harland becomes a little more sympathetic when he's convinced that his daughter's been kidnapped by Bomba, but I for one would have liked him to be forced to eat crow by story's end.

Harland is also the focus of all the bad attitudes toward the black natives, mostly seen as bearers. Barnes has to remind him to let the natives rest when they're tired, and Harland seems convinced that all he has to do is throw money their way to get their cooperation. Modern audiences would probably find the bearers overly deferential, but Barnes at least treats them like human beings.

Pat Harland is the opposite of her father. Her photographic hobby clearly mirrors her father's profession, but she's actually fascinated by the wonders of nature-- which leads her into the Rift. There Bomba attempts (without success) to save her native guide from a leopard, and Pat almost repays the strange white boy by shooting him. As a nice change, Bomba is initially leery of the girl who tried to kill him, and her "abduction" consists of her tagging along after him, trying to cajole Bomba into taking her back to her father. Bomba resists, and then (for reasons unknown) seeks out Harland and Barnes' search party by himself. Harland, rash as always, shoots at Bomba and grazes his shoulder, thus convincing Bomba that he should not take Pat back to her "bad" father.

Incidentally, Harland's dialogue is intersting; since neither he nor Barnes can credence a white savage living out in the wild, Harland refers to Bomba as possibly being an "albino," that is, a Negroid with albino coloration. This adds a new level to his anger. Is he angry only that his daughter has been kidnapped, or does he also fear miscegenation?

Bomba's decision not to guide Pat back may have its own deeper level. When she asks him to take her to a native village, he spirits her off to his secluded jungle lair. No intimations of romance crop up, but it's pretty clear Bomba wants her to be his tree-house pal, to assuage whatever loneliness he feels since losing the man who reared him the jungle, a deceased naturalist described (by Pat) as a "misanthrope." Clearly Bomba is a bit misanthropic himself, but he's not beyond all socialization. The jungle boy even finds time (somehow) to fashion a leopard-skin outfit for Pat after she tears her skirt, as shown in the lobbycard picture above. To be sure, he only does so after first offering to take off his loincloth and give it to her, which was clearly meant to play *very* lightly on possible sexual tension. (For that matter, director Beebe seems to take his time showing Pat climb down from a tree, which entails a certain amount of butt-photography.)

As Harland and Barnes close in on Bomba and his rather-willing "abductee," the script introduces two new elements to forestall any deadly confrontation between Bomba and Harland. One is the presence of a hungry lion, while the other is the presence of several lion-worshipping Masai. Barnes explains to Harland their twofold peril: they can shoot the lion, but the Masai are likely to attack them. The lion does attack Barnes' loyal bearer Eli, and Barnes, acting against his own advice, saves Eli's life by shooting the lion, thus bringing down the wrath of the Masai. By good fortune, however, Bomba and Pat are nearby, and Bomba drives the natives away by starting a grassfire in their path. The picture ends more or less happily, with the white tourists going home while Bomba stays in his native land, where he'll have other G-rated jungle-adventures with other lissome lasses.

In BTJB Bomba is an "uncanny" hero only by virtue of his attire; he possesses no outre skills or weapons. But if one were to remake the film sans the Bomba character, I'd probably still classify it as "uncanny" because I find a certain element of affective "strangeness" in the depiction of the Masai. To be sure, even the tolerant Barnes shows some European bigotry by speaking of their lion-worship as "mumbo jumbo." But even though the Masai are principally seen through the film's ample use of archive nature-photography, they take on a deeper dimension than any of the servile bearers. In Barnes' summation of their religion, he says that their reverence for lions is such that when the animals menace the Masai or their property, the tribe will only allow the lions to be killed by certain designated lion-killers, and that it's an occasion of great sadness.

This element is responsible for my use of the Campbellian classification "metaphysical." Most of BTJB refers to sociological myth-motifs, regarding, say, the inevitable comparisons of savage life with civilized society. But even though the movie's main interest in the Masai religion is to provide a climactic conflict, BTJB isn't incorrect in conveying the deep resonance that primitive tribes often feel for the animals who are their "neighbors," as well as symbols of a mysterious godhood. I'm surprised to find it, even as a tossoff element, in one of the low-budget Monogram productions. But then, a diamond in the rough is still a diamond.
Posted by Gene Phillips at 2:19 PM
Email ThisBlogThis!Share to TwitterShare to FacebookShare to Pinterest
Labels: combative adventures, exotic lands and customs (u), outre outfits (u), superlative skills (u), the uncanny