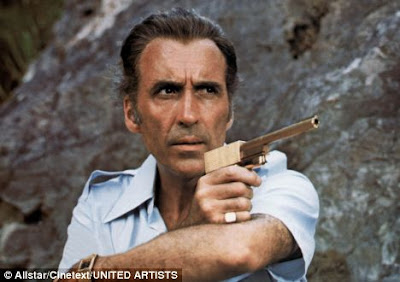 As I did in my review of THUNDERBALL, I reread the 1965 Fleming book prior to rescreening the 1974 adaptation.

I noted that the book and film versions of THUNDERBALL fell into my phenomenal category "the uncanny," for the main aspect they have in common is the use of the metaphenomenal trope "outre outfits skills and weapons," specifically weapons. I mentioned that the book version of villain Emilio Largo also conforms to the trope "freakish flesh" while the film version does not.

Both versions of GOLDEN GUN include the "flesh" trope, even if its manifestation is pretty nugatory: villain Scaramanga has a third nipple. Both in book and movie this detail failed to impress me very much, probably because it isn't front and center, like Ernst Blofeld's "doll-like eyes." The filmic Scaramanga takes on slightly more mythic dimensions than the literary one, not because of his freakiness but because he's essayed by horror-film great Christopher Lee.

The literary Scaramanga, despite Fleming's attempts to make him a "shadow version" of James Bond, complete with gun-and-sex fetishes, didn't grab me. He's not a master schemer, merely a skilled assassin who becomes involved in a plot to ruin U.S. sugar futures-- a plot initiated by the KGB, thus bringing Bond, in his last novel, back into conflict with the sort of Cold War enemies he faced in CASINO ROYALE. Scaramanga seems a small-timer, even though he does play at psychological torture at one point, deceiving Bond into thinking his gal-pal Mary Goodnight is about to be run over by a train. (Shades of bygone silent serials!)

The only "outre weapons" in the novel appear at the beginning. In a continuation from YOU ONLY LIVE TWICE, Bond has been brainwashed by the Russians and sent back to MI-5 to kill M. To this end, brainwashed-Bond smuggles a cyanide-spraying gun past security. M counters with a bizarre defense: a glass wall that slams down in time to project him from the spray. After that, when Bond has been rehabilitated and sent on a new mission in jig-time, only conventional weapons are used. Admittedly there's a touch of bizarreness in the fact that Scaramanga favors gold or silver bullets for his murders. He also coats a bullet meant for Bond with snake poison, so in a way Bond attempts poisoning and gets poisoned in return-- even though Bond survives and Scaramanga does not.

The GOLDEN GUN film steps up the "outre weapons" trope somewhat by giving Scaramanga his own private island with a "funhouse" in which he and his armed prey may stalk one another. The deadly funhouse is an amusing touch but I've seen it done much better elsewhere, particularly certain episodes of TV's WILD WILD WEST.

In the book, even though Scaramanga isn't that fascinating a personality, Fleming does at least expend effort on compiling a psychological profile, including a strange Freudian trauma in which Scaramanga becomes invested in casual killing after the death of his favorite circus-elephant. It's not all that deep, but it's positively labyrinthine compared to the flat character Christopher Lee has to work with. Sadly, the cinematic GOLDEN GUN appeared at a time when the Bond franchise was beginning to indulge in some very fatuous humor, as if director Guy Hamilton and his scripters, for all their long acquaintance with the franchise, had become embarrassed by their association with the character. So Lee's Scaramanga tosses out the tale of his pet elephant's death for Bond's amusement, but it doesn't give any insight into his character. Ditto for the villain's odd relationship with his servant Nick Nack-- not in the book in any form- in which the master assassin invites Nick Nack to kill Scaramanga if he can. Further, since by 1974 Communist incursions were less significant to audiences than the energy crisis, the "sugar futures" plot is dropped in favor of hero and villain fighting over a radical new solar-energy device.

There are some decent stunt-sequences in GOLDEN GUN, such as the memorable "overturning car-in-air" stunt that ALMOST redeems the return of an obnoxious Southern-sheriff character introduced in LIVE AND LET DIE. But GUN the movie feels like it's mostly on cruise control. Admittedly it couldn't be a "send-off" for cinematic Bond the way Fleming could send off his literary version. But Hamilton and his cohorts fail to give us the sort of above-average villain that the presence of Christopher Lee merited.
Posted by Gene Phillips at 3:37 PM
Email ThisBlogThis!Share to TwitterShare to FacebookShare to Pinterest
Labels: combative adventures, diabolical devices (u), freakish flesh (u), the uncanny