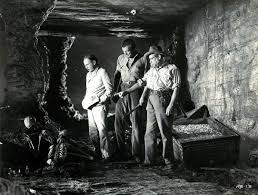 
Most film-fans today primarily know British director Robert Stevenson for his many Disney films of his late period, particularly such above-average works as MARY POPPINS and DARBY O'GILL AND THE LITTLE PEOPLE. But the hallmark of his early career in the 1930s is that he directed the first, and best, adaptation of H. Rider Haggard's 1885 novel KING SOLOMON'S MINES.


Haggard's novel was the first of the so-called lost-race stories, even though the "race" involved is simply a tribe of Africans who have remained so isolated from the rest of Africa that they've had no contact with the white people who had made their indelible stamp upon the continent. In many ways these fictional Africans, the Kikuanas, aren't markedly different from other tribes, since author Haggard had garnered experience in that domain, but they are still "exotic" for two principal reasons. One is that their female witch-doctor Gagool practices a species of "witch-finding" that allows her to have any tribe-member executed-- and the other is that the remote land of the Kikuanas is found to be the source of the legendary mines of King Solomon.


In the novel, the hero Allen Quatermain is hired by a man whose brother disappeared into Kikuana-land looking for the mines, so the mission starts out motivated by rescue, not treasure-seeking-- though of course the title makes it inevitable that the protagonists will get their shot at priceless riches. Though the film includes most of the cast from the book, it foregrounds the attractions of treasure-seeking by introducing two new characters: Patsy O'Brien and his adult daughter Kathy, two penniless Irish fortune-hunters stuck in Africa. They manage to hitch a ride on an expedition headed by experienced white hunter Quatermain (Cedric Hardwicke). Also along for the ride is a mysterious, very dignified Black African, Umbopa (Paul Robeson).


Various contingencies lead to Quatermain taking his party into Kikuana-land, where the hunter finds himself involved in king-making as well as treasure-hunting. The Kikuanas are ruled by a tyrant named Twala who, as noted above, allows an incredibly ancient witch-woman, Gagool, to maintain a reign of terror with her activities. (One of the creepier scenes in the film shows her marking out one of her victims, who is immediately executed by tribesmen wearing white feathery masks-- apparently the Kikuana equivalent of executioners' masks.)  The white men are initially threatened by the natives but they manage to overawe them with their superior technology-- first with false teeth, and later with guns-- so that the tribesmen think they're gods. (Hence the "phantasmal figuration" trope cited here.)  However, Twala is the usurper of the previous chief's family, and Umbopa is the son of the murdered chief, who has returned to take back the tribal throne.


I've seen some online political critiques of the film that claim that the film supports imperialism. It's true that it doesn't in any way critique real-life British imperialism. However, the Brits in the film, like the ones in the novel, don't despoil or dispossess the tribe, nor do they alert imperialist authorities to the hidden tribe's presence. When the whites escape, they do take some treasure with them, but it's a pretty fair exchange for having ended an unquestionable tyranny and restored a deposed ruler.


There are various minor differences between book and film. In the latter, not only do the white adventurers get trapped in the depths of the mines by Gagool, they are also menaced by an erupting volcano (cinema needs all the visual spectacle it can get). The novel has an African woman of the isolated tribe fall in love with one of the white men, who is flattered but doesn't allow any romance to develop. This doesn't work as badly in the novel as it sounds, but Haggard is obliged to kill the woman to tie up that loose end, so that character's exclusion from the film is probably for the best. The two new Irish characters-- the father who goes looking for treasure, and the daughter who more or less guilts the whites into going to his rescue-- are pretty forgettable. On the plus side, the film is very accurate to the novel's original portrait of Allen Quatermain, who is a stable older man who happens to be a good shot, but who in no way resembles the he-man white hunters that imitated the Haggard novel-- to say nothing of other, less faithful movie-Quatermains. Oh, and since Umbopa is played by Paul Robeson, the film-version sings a lot more than the book-version, but that's not too hard to take, and certainly Robeson's character has more dignity than most Hollywood versions of African tribespeople.

Posted by Gene Phillips at 12:53 PM
Email ThisBlogThis!Share to TwitterShare to FacebookShare to Pinterest
Labels: combative adventures, exotic lands and customs (u), phantasmal figurations (u), the uncanny