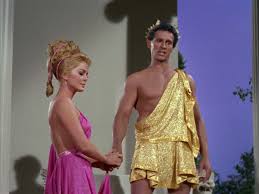 
"Who Mourns for Adonais?" feels very much like a script by a writer who's aware of elements that helped sell other scripts to Gene Roddenberry. "Adonais" is certainly a better treatment of the Roddenberry-trope of the "irresponsible god" than "Squire of Gothos," but I wouldn't be surprised to find that authors Coon and Ralston modeled their would-be deity upon Trelane. Like Trelane, the episode's villain-- an alien who calls himself Apollo-- wants attention and adulation from modern humans, as represented by the Enterprise crew. Admittedly, Apollo's motivations are better than Trelane's. Since Apollo was one of several aliens who came to Earth in archaic times and inspired all of Greek culture, this gives him some affinity with Earth people. Trelane brings a female crew-member down from the Enterprise and dresses her in frilly court garb so that he can dance with her. Apollo does the same with Lt. Palamas, but he has a more compelling motive: he plans to mate with her, just as his father, Alien-Zeus, mated with a long-perished Earth-woman to beget Apollo himself.

There's also a likely influence from "Space Seed," a script on which Gene Coon collaborated, though he did not originate the first pitch. Apollo probably has mating on his mind to some extent when he waylays the Enterprise with a giant energy-hand, but he doesn't actually select the crew that descends to his planet (even if he does reject the possibility of Spock as a visitor, because of the Vulcan's resemblance to Pan). McCoy brings Lt. Palamas (note the Greek-sounding name) because she's an expert on Earth-archaeology-- just as in "Space Seed," the first landing-party to encounter Khan's ship includes Marla McGivers, an expert on history. Palamas will be temporarily overwhelmed and seduced by Apollo as McGivers was seduced by Khan, but there the resemblance ends. McGivers may be a retrograde female character in her desire to mate with a manly he-man, but her character is consistent even when she realizes that she's done wrong and seeks to make amends. Palamas is introduced as a love-interest for Scott, and it's strongly suggested that she will easily leave the service if she gets married, as most women do, even in the 23rd century. Palamas shows no passion for her profession, and her seduction by Apollo is under-characterized, almost as if she became willing to give it up to a guy who gave her a really fancy dress. Palamas also betrays Apollo as McGivers did Khan, but with a different tone: here Palamas is the Castrating Woman, confusing and ultimately defeating Apollo simply by scorning his male attentions.

The trope of "aliens who were once Earth-gods" has always been absurd, but Coon and Ralston strive to give it some gravitas. On one hand the future-men declare that they no longer need the parenting influence of gods-- though, perhaps to keep from sounding too atheistic, Kirk delivers a line about finding it adequate to have "one" god. On the other hand, the script attempts to capture the Glory That Was Greece in this science-fictional context, and to admit, however obliquely, that all human culture descends from early man's attempts to understand the universe through a multiplicity of deities.

On a closing note, I'll admit that Ralston and Coon get some of the details of Greek myth more or less right. When Apollo disses Pan, he mentions that he wants neither "sad faces" or "fear," while in Greek myth, Pan was an image of "panic" and had at least one contentious encounter with Apollo. The planet of Apollo is given the name "Pollux," another semi-divine son of Zeus. :Lastly, Apollo compares Kirk to both ":Agamemnon" and "Hercules," and the genuine Apollo of myth did indeed have some aggressive moments against those worthies.

Posted by Gene Phillips at 2:14 PM
Email ThisBlogThis!Share to TwitterShare to FacebookShare to Pinterest
Labels: combative dramas, the marvelous