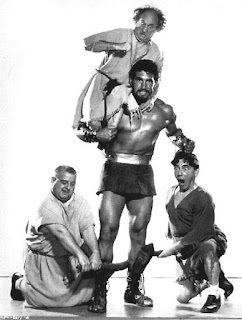 For their third feature film, the Three Stooges have an encounter with an American version of the Italian muscleman epics. Since the film made more money than any other Stooges feature film, I gather that the *peplum* subgenre hadn't at that point worn out its welcome in American theaters.

Aside from that bit of sociological data, HERCULES feels like a bit of retread of HAVE ROCKET WILL TRAVEL, right down to the trope in which the trio of goof-ups make a scientific breakthrough via sheer dumb luck. In addition, once again the aging comics put themselves on the line for a younger romantic couple-- scientist Schuyler and girlfriend Diane-- and also have to deal with another bad-tempered boss. This time the boss (George Neise) is also putting the moves on Diane, and a large part of the story concerns timid Schuyler finding the courage to defend his girl against a competitor.

Schuyler has tried and failed to construct a time-machine. The Stooges work their magic on the device, and the machine whirls Schuyler, Diane, and the daffy trio back to Greece in 900 B.C. Their sudden manifestation interrupts a war in Ithaca, with the result that righteous king Ulysses loses a battle and is imprisoned by his enemy, the usurper Odius (also played by Neise). Odius is served by Hercules, who in this incarnation seems to be not a super-powered demigod but simply a really strong bully-boy. Odius takes the time-traveling quintet back to his palace to celebrate, though like his 20th-century descendant he really wants to 'celebrate" with Diane. Technically, though, Schuyler and the Stooges commit the first act of aggression: Schuyler insists that Ulysses is a "good guy," so the guys help the deposed king escape. Odius then condemns the four guys to the slave galleys, and makes plans to marry Diane.

During the time that the guys are exiled from Ithaca, Odius could have married Diane a dozen times over, The film never explains how Diane fends off her captor, though if the film had introduced Ulysses' wife, maybe Penelope could've given the 20th-century girl some pointers on discouraging male attention. Diane's fate is definitely secondary to the script's desire to send the four guys on various adventures. In line with the subplot about building up Schuyler's confidence, it just so happens that when he's sentenced to the galley, it builds up his whole body into Herculean proportions. Curiously, the same rigors have absolutely no effect on the Stooges.

Once Schuyler looks as powerful as Hercules, the Stooges escape the slave galleys by claiming that the hulking scientist is the real thing. This leads to the best sequence in the film, as the four adventurers are charged with overcoming a two-headed Cyclops. Later, in the travelers' quest to make enough money to return to Ithaca, the Stooges become fight-promoters for Schuyler-- initially arranging for "fake fights," in part to build up the scientist's confidence.

Eventually, though, Schuyler has enough real fights to build up his martial skills. When the foursome returns to Ithaca, Schuyler ends up having a wrestling-match with Hercules, who resents the impostor who's been using his name. Not only does Schuyler win the match, he informs the strongman that later centuries will believe Hercules to be a great fighter of justice. Hercules promptly turns on his own boss Odius and helps overthrow the usurper. The five time-travelers return to their time-machine with Odius in pursuit, and as they return to their own time, they manage to banish the villain to an inhospitable place in the time-stream.

One routine, in which the Stooges are mistaken for female slaves and forced to work in a women's bathhouse, simply comes off tired, partly because the material has been made blander for the juvenile audiences at whom the films were aimed. The comics' encounter with the mythic past makes for a pleasant stroll down a pop-cultural memory lane, but nothing more.
Posted by Gene Phillips at 11:29 AM
Email ThisBlogThis!Share to TwitterShare to FacebookShare to Pinterest
Labels: the marvelous