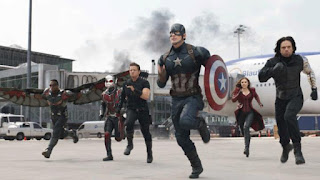 Again, Epic Poetry must have as many kinds as Tragedy: it must be simple, or complex, or “ethical,” or “pathetic.—Aristotle POETICS Section XXIV, trans. S.H. Butcher.

Putting aside Aristotle’s very specialized meanings for his terms “simple” and “complex,” his other pair of terms. “ethical” and “pathetic,” prove very useful to me in describing the different approaches taken by modern moviemakers in exploring one question: “what is the significance of the phenomenon of ‘collateral damage’ for the currently booming superhero film-genre?”

In the mainstream comic books of past generations, collateral damage was a spectre that generally had only short-term effects. In  a given story, authorities might get miffed for a while because Superman chose to destroy a slum-tenement, or because Spider-Man’s battle with a villain caused someone’s death, but in neither case were there long-term social consequences. The great rivals of the 1960s, DC and Marvel, would exploit uncertainties about heroism in different ways. At DC, the emphasis was ethical, in that the hero might be accused of wrongdoing yet would be swiftly exculpated. At Marvel, where a soap-operatic style prevailed, the reader would know that the hero was innocent but his reputation might suffer for a time, though not to so great an extent that the hero could not operate.

Comic books of the 1980s and thereafter sought to woo adult audiences, and so during that period artists examined the interaction of society and the superhero in more detail, if not always with great insight. Frank Miller’s 1986 THE DARK KNIGHT RETURNS, whose model furnished most of the ethical underpinnings of BATMAN VS. SUPERMAN, explores issues more pertinent to morals than to feeling. In the decade of the 2000s, the CIVIL WAR series at Marvel extended the 1960s idea of the superhero as “suffering savior” into the realm of the outcast from an increasingly monolithic governmental system.

I cannot render an overall verdict on the fidelity of the 2016 film CAPTAIN AMERICA; CIVIL WAR (henceforth CACW) to Marvel’s sprawling congeries of CIVIL WAR-related series, since I have not read most of the books. I suspect that the comics-stories follow the dominant Marvel orientation: that they concern ethical conflict less than conflicts of feeling. The central idea uniting all of these serials was that the American government decides to oblige all superheroes to register their names and identities, thus abolishing their liberty to act without government oversight, either as vigilantes, like Spider-Man, or as organizations loosely affiliated to the government, like the Avengers..

I can state, however, that CAPTAIN AMERICA: CIVIL WAR is far more devoted to the pursuit of Aristotle’s “pathetic” orientation, even as BATMAN VS. SUPERMAN aligs itself with the idea of “the ethical.” BATMAN VS. SUPERMAN maintains three major intersecting plotlines that are meant to explore the ethical orientations of Superman, of Batman, and of Lex Luthor. In contrast, there’s just one dominant plot in CACW. Due to a series of events that create bad publicity for superheroes—some involving collateral damage, and one continuing a plotline about a corrupted super-operative—the government asks for compliance to a registration ruling. The various Marvel superheroes then line up for or against it, depending on their personal sympathies. In the 1960s, such conflicts between heroes would be short-term, ending once a pair of heroes went their separate ways. Here, the conflict is meant to continue with a sense of novelistic elaboration.

Whereas BVS suffered from an overabundance of plot-action, CACW suffers from an overabundance of character-action. Twelve Marvel characters are ranged against one another on either side of the Registration Act, and one of them is a living embodiment of collateral damage. Such is the not-very-heroic super-operative Winter Soldier, who was originally Captain America’s WWII buddy, later brainwashed into becoming an agent for anti-American powers. In the previous Captain American film, the Winter Soldier went undercover to escape prosecution. This time out, a mystery villain—not revealed until near the film’s conclusion—manipulates the Soldier into becoming an immediate threat. Thus he becomes the test-case for the Registration Act. Those aligned to Registration simply want the Soldier captured and locked away, and those opposed to it want to investigate the causes behind the Soldier’s re-activation.

Aside from a brief debate between the main representatives of each side—respectively, Iron Man and Captain America—the viewer sees very little individual consideration of the ethical questions of governmental oversight. True, each of the super-warriors—as well as the mystery villain and a couple of support-characters—get his or her “time in the spotlight,” in which they get to do some “character bit.” Some are strong; some are weak. But arguably there are so many of them that there ate just, as the monarch from AMADEUS said, “too many notes.”

Arguably, there are too many fights, as well. I had no problem with the quantity in the previous Captain America film, for they reinforced the progression of the plot. Here, however, the multiple battles are more gratuitous: rather than supporting the plot, they become the plot—which, incidentally, was a fault some comics-readers found in the pathos-with-action house style of Marvel Comics. 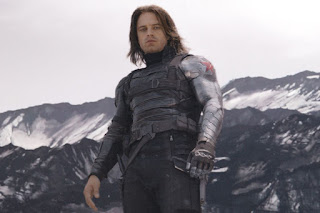 The ongoing battles might have been more compelling had the script imparted a tragic quality to Cap’s buddy/ But he’s even flatter here than he was in his previous appearance, making it difficult for this viewer to share the star-spangled hero’s investment in his “Manchurian Candidate” buddy. Though I admit that the battle-scenes are generally well constructed on an individual basis, I for one would have dropped a long car-chase scene, and maybe a couple of other minor altercations. I think that with fewer action-scenes, viewers might actually have taken more pleasure from the film’s standout battle: a mammoth, multi-character brawl between the opposed sides. Though the non-superhero cinema boasts a plethora of memorable multi-character brawls, the big airport-fight in CACW is the first time that the cinema has come close to emulating such a brawl with the utilization of diverse super-powers. In comic books the foremost practitioner of the multi-superdude brawl was Jack Kirby, and the airport-fight may be viewed as the first time any film succeeded in emulating Kirby’s expertise with this sort of involved fight-choreography.

There are also various twists and turns, in which characters make or break allegiances, but again—too many to invoke much feeling, particularly the concluding battle between Iron Man and the good captain. Their battle doesn’t follow through on the opposition between American individualism and American conservatism, and it even brings in a plot-conflict that's totally extraneous to that thematic opposition. 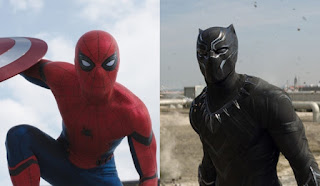 The film also debuts one new character and one retrofitted character. The African superhero Black Panther makes his first cinematic appearance here, and though he’s pulled into the plot by virtue of the Winter Soldier storyline, his appearance and characterization are exemplary. The newest iteration of Spider-Man—“on loan” to Marvel Studios from Sony—is more of a mixed bag. The costume and the webbing look good, and after the last two movie-versions, it’s pleasant to see a wall-crawler who continually cracks wise. However, the rest of the hero’s characterization is extremely shallow—which is understandable, in that Marvel Studios have no motive to do anything more with the character than was strictly necessary for their movie’s plot.

In the end, the most interesting aspect of both CACW and BVS is that even though I tend to assume that their scripts were conceived without direct influence from one another, both of them are just as swift to hold the superheroes guilty for the collateral damage they cause as the mainstream comics were swift to excuse the heroes of any misdeeds. Just as their separate approaches reminded me of Aristotle’s distinction between “ethical” and”pathetic,” the common theme shared by the two films suggests the Greek idea of the *pharmakos,* the sacrificial vessel through which a community’s fears and guilt is expiated. Once our superheroes were pillars of rectitude, until Marvel Comics started the trend of giving its heroes “feet of clay.” Both the DC film and the Marvel film now end with sacrificial deaths—a no-doubt temporary death for Superman, and a cryonic exile for the Winter Soldier. Still, as yet no superhero film has successfully explored the myth-theme of the superhero-as-sacrificial-lamb. Someday a film may be made that satisfactorily explores both Captain America’s and Iron Man’s conceptions of power—for the one, the desire to save lives no matter what, and for the other, the desire to expiate one’s guilt for failing in that lofty mission.
Posted by Gene Phillips at 1:17 PM
Email ThisBlogThis!Share to TwitterShare to FacebookShare to Pinterest
Labels: combative adventures, the marvelous