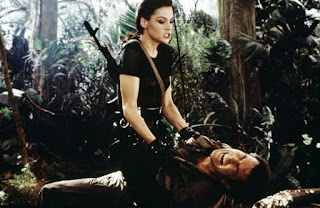 To get the phenomenology issues out of the way first, there's so much high-tech in GOLDENEYE that I leaned toward considering it to be within the marvelous domain. However, so far as I know, all of the science presented in the film-- EMP weapons, cyber-assaults on banking websites-- were entirely within the realm of possibility in 1995. In addition to one or two James Bond gadgets, such as an exploding pen, the film also sustains an uncanny "outre skill" in the unique assassination-method used by Bond's above-seen secondary opponent, Xenia Onatopp (Famke Janssen).

Before getting further into the subject of the film's villains, I should focus on the hero. This was the first and best of Pierce Brosnan's four Bond films, and Brosnan does his finest job of coordinating the aspects of toughness and charm that made Connery so appealing in the role. Sole credited writer Michael France never wrote a Bond film before or after this one, and, given that he didn't do terribly well in his later superhero films, such as the 2005 FANTASTIC FOUR, France must have been all but channeling the dry wit of earlier Bond authors, when he scripts "new-classic" Bond lines like "No more foreplay" and "She always did enjoy a good squeeze."

GOLDENEYE is also one of the few Bond films wherein the secondary villain is far more interesting than the main foe, not least because of the former character's name, a clear tip of the hat to Fleming's "Pussy Galore." France's script doesn't give any background to Xenia Onatopp, but director Martin Freeman makes her the embodiment of what might be called a kissing-cousin to that of the "toothed vagina:" i.e., the "crushing vagina." For reasons never revealed, Xenia has tremendous strength in her legs, so that she can crush a man's ribs to jelly while masochistically enjoying any pain her victim wreaks upon her in trying to get free. Freeman's mise-en-scene between Bond and Xenia in a Russian bathhouse is easily the film's best single scene, and probably has been the one most used as a highlight-clip.

The script is clearly influenced by third-wave feminism, though I suspect that this was camouflage on the part of France and Freeeman. In contrast to way filmmakers of the 1980s handled Bond, the first film of the 1990s is marked by lines of extreme political correctness. I didn't mind the film recasting Bond's superior M as a female, but M's lines to Bond, calling him a "sexist, misogynist dinosaur" and a "relic of the Cold War," are tiresomely agenda-driven. Later, the 'good girl" Natalya rants against "boys and their toys" and condemns Bond's womanizing, as does a minor character near the film's opening. Fortunately, politicization doesn't totally emasculate the Bond mythos, not least because Brosnan's Bond successfully seduces the two younger women. It's possible that the filmmakers were using these lines purely with an eye to publicity, seeking to "rebrand" the appeal of Bond for the 1990s. At the same time, one can't overlook that all these third-wave gestures might be cancelled out by the persona of Xenia Onatopp. Not only does she represent a specifically feminine form of power gone bad, she even dies in a situation that resembles the "V" of her own leg-lock.

Posted by Gene Phillips at 3:19 PM
Email ThisBlogThis!Share to TwitterShare to FacebookShare to Pinterest
Labels: combative adventures, superlative skills (u), the uncanny