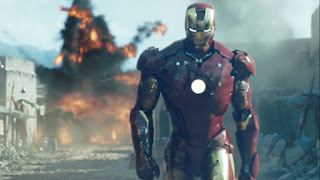 
It's almost ten years since the original IRON MAN movie came out. Though it's far from the perfect superhero movie, I've decided to give a "good" mythicity rating in part because it proved as important to its genre in the 2000s as the Tim Burton BATMAN was in the 1990s. Had Marvel Studios not re-acquired the rights to the character in 2006 and made this film, it's entirely possible that the superhero boom of the early 2000s would have dwindled once the big studios ran through the A-list names like X-Men and Spider-Man. Marvel Studios, having a more intimate investment in the genre, used IRON MAN as a linchpin for introducing the mainstream audience to the pleasures of a superheroic shared universe.

Director Jon Favreau is probably correct in crediting some of the first movie's appeal in its "independent film" approach. In contrast to many of the earlier superhero flicks, IRON MAN pays a great deal of attention to establishing character interactions, giving the actors a lot of material in which to invest themselves, as opposed to emoting in front of a green-screen. Back on my first viewing, I was impressed with the film's updating of Iron Man's origin, as well as the central character's shift away from munitions manufacturing. And yet, now I find myself giving the writers less credit in those departments. For instance, the comic-book origin was strong material to start with. In contrast, it's amazing that the scripters made such a silk purse out of the sow's-ear known as the "Obadiah Stane" arc from an early 1980s run of the IRON MAN comic. It was in these issues that writer Denny O'Neil contrived to give Tony Stark a new competitor who took over his business, one who had very loose ties to Stark's late father. The original arc was tedious and superficial, but it seems to have been integral to the movie-script's interpretation of the Tony Stark character in terms of his "daddy issues."

Those paternal conflicts also play into Stark's early willingness to churn out weapons for the military while making excuses about how his technological advances save other lives. Given that Robert Downey Jr. was in his forties when he essayed the character, that factor makes it difficult to credence Tony Stark being naive about the ways of politics and the manufacture of weapons. Still, one may choose to view Stark as an example of "delayed adulthood," which may be one reason he resonated with Millennials, as against the "jet-set industrialist" model on which Stan Lee based the comic-book Stark. Further, whereas Lee probably meant no irony in having Stark injured while selling his munitions-- after all, in the comic-book origin, the munitions-maker is wounded by a primitive Asian trap-- whereas the scripters of the movie clearly wanted Stark to reap the consequences of his own "death merchant" acts, even if villain Obadiah Stane is directly responsible for the munitions falling into enemy hands.

Downey's irreverent but lovable scapegrace is given greater depth by his two primary supporting characters, secretary Pepper Potts (Gwyneth Paltrow) and military buddy James Rhodes (Terence Howard). Though they're both functioning adults, clearly they can't help enjoying Stark's antics, and so the viewer finds said antics harmless as well. IRON MAN of course cannot escape the deeper sociopolitics of the munitions industry, so in this context it's enough that he does come to see "the bigger stick" as a morally bankrupt course of action. In its place, naturally enough, is the superhero's solution of direct personal action, while his negative image and "bad father" Stane validates Stark's decision by showing his willingness to exploit technology at the cost of humanity. 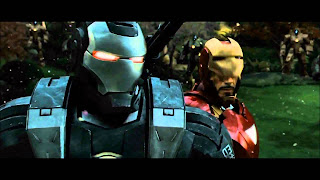 IRON MAN 2, however, proves somewhat less balanced than the debut film. With the bad father out of the way, the script must substitute an excuse for Stark to spiral into self-indulgence again. It's been stated that the script was indirectly influenced by a well-received story-arc from the comic book, in which Stark became an alcoholic as the result of work-pressures. Favteau's scripters only touched on alcoholic visual motifs, but chose to situate these in terms of an almost manic-depressive concept of Stark, oscillating between moods of invincibility-- seen in the opening scenes where Stark celebrates himself through the medium of a science expo-- and moods of extreme depression. The depression comes about logically enough, as Stark tries to come to terms with the fact that the very device that keeps his heart beating is also slowly poisoning him.

Though alcoholism is not the direct cause, Stark-- who has publicly confessed his identity as Iron Man, and who refuses the military access to his armor-- begins acting like a manic drunk, even when in armor. This plot-line culminates in emnity between Stark and his two major support-characters, which leads to major violence when Rhodes dons a duplicate set or armor, takes the name "War Machine," and battles Iron Man in an attempt to bring him under control. This is one of the few areas in which IRON MAN 2 exceeds the original, since the battle of the armored titans here is far better choreographed than the one in the 2008 film. Of course, by film's end Rhodes and Potts are both on Stark's side again, and the key to the industrialist's reformation lies, ironically enough, in his making contact with his late father, who never seemed to appreciate Stark in life.

Downey provides, if anything, an even more nuanced version of the quirky Stark persona than he did in the first film. However, "for every bit of good there's a little bit of bad," and in this case it's a badly chosen villain. Whiplash, a minor villain from the comics, is pressed into service as a "big bad," a conniving Russian whose father's fortunes were ruined by his interaction with Stark's father. Perhaps Favreau and company might have sold viewers on this character, had they been consistent about pitching him as a master planner from the first. However, they introduce him by having him attack Stark in public, like a hundred other vengeance-seeking villains-- and once that's happened, it's hard to credit such a reckless figure as being the great manipulator seen in the rest of the film. I should add that the script also takes one of Iron Man's better 1970s villains, a master-planner type named Justin Hammer, and downgrades him into a pawn of Whiplash.

Sadly, bad judgments regarding the Armored Avenger's villains extended into IRON MAN 3, to date the last and least of the series. But at least the first film stands as one of the more substantive superhero films, even if there seems little potential for any more solo films with the character in the near future.

Posted by Gene Phillips at 3:05 PM
Email ThisBlogThis!Share to TwitterShare to FacebookShare to Pinterest
Labels: combative adventures, the marvelous