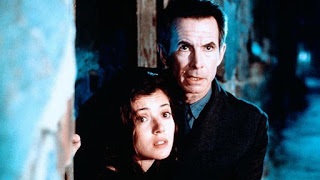 This stylishly photographed (in Hungary) vampire thriller was produced as a TV-movie, so it's not surprising that it was pretty low on gore and grue.

Schoolteacher Katherine (Mia Sara) mourns the passing of her father, but sees an odd spectre at the gravesite. The viewer never precisely learns what the vision was, though almost immediately Katherine decides to fly to Romania and do some research into the background of her father, whom she never knew growing up.

Wandering around Romania, Katherine encounters a helpful diplomatic aide, a baleful police officer, and a cab-driver who claims to be a slayer of vampires. Eventually Katherine finds her father Anton (Anthony Perkins), but she also finds out that he had a good reason for remaining apart from her: he's a real vampire, albeit of some strange variety that feeds on mortal blood with a sort of ALIEN-style tongue. Katherine is one of the few children to be born from the union of vampire and human, and for that reason, the local clutch of vampires, over whom Anton has some authority, is very curious about the newcomer.

It's a good thing the camera likes Sara so much, since she's in most of the scenes. I felt as if the script missed a beat in that Katherine never wants to guilt Anton for not being there for her, but the brisk plot-turns probably mitigated against that. Perkins is no better than adequate, a far cry from his stellar re-creation of Norman Bates four years previous in PSYCHO III. Katherine and Anton alone get a degree of character development, marking DARKNESS as something of a "daughter-rescues-father" fantasy, but the psychological possibilities are neglected in favor of quickly moving incidents and a bravura finish. A good time-waster, nothing more.
Posted by Gene Phillips at 12:43 PM
Email ThisBlogThis!Share to TwitterShare to FacebookShare to Pinterest
Labels: the marvelous