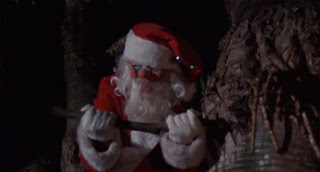 I've seen a few online defenses of this quickie FRIDAY THE 13TH clone, but I'm on the side of those who think it's among the worst slashers out there. I don't expect slasher-flicks to be all that original, or even coherent, but above all they ought to be viscerally gruesome.

Somewhere or other I remember actor David Hess-- best remembered for his nasty role in 1972's LAST HOUSE ON THE LEFT-- grousing about his career being hurt by typecasting from that movie. That's probably true, but TO ALL A GOODNIGHT-- Hess's only directorial credit for a feature film-- seems like Hess getting a delayed revenge on horror-fans, by giving them a poorly lit and poorly staged clone of the popular FRIDAY film. On the other hand, writer Alex Rebar-- best known for playing THE INCREDIBLE MELTING MAN-- probably just wanted to grind something out as quickly as possible. Oddly, though, he's credited, in the same year no less, for scripting a far superior work. Arthur Jeffrey's DEMENTED. Though DEMENTED was essentially a take on 1978's controversial I SPIT ON YOUR GRAVE, its script was competent and occasionally affecting, the exact opposite of GOODNIGHT.

As in FRIDAY, we're presented with a bunch of horny teenagers who want to do nothing but screw their brains out. The site is an elite girls' finishing school, where only a small handful of ladies had remained in residence during Xmas break. Two older women, a cook and a den mother, are stil hanging around, but the girls are confident that they can lull their suspicions long enough for a bunch of guys to infiltrate the school and then go to town. All of the teens are even more one-note than those of the worst FRIDAY, though top-billed Jennifer Runyon plays a "good girl" who, in approved "Final Girl" tradition, survives the general carnage.

It's not exactly original, but in addition to the Santa-suited killer who commits most of the murders, Saint Prick has an accomplice on the inside. There's never any halfway plausible reason for the killer to assume the Santa disguise, and his murders don't follow any ironic Christmassy patterns, like 1984's far superior SILENT NIGHT DEADLY NIGHT. I did raise my eyebrow once when the Santa-slayer slammed an axe into a guy's head, but that was about it. The psychology of the killers is an outright steal from the first FRIDAY flick, without even lively performances to redeem it.

I can only think of one good use for GOODNIGHT. Any time some elitist critic disses the original FRIDAY, he should be obliged to watch this film, to see what real cinematic badness is like.

Posted by Gene Phillips at 12:27 PM
Email ThisBlogThis!Share to TwitterShare to FacebookShare to Pinterest
Labels: perilous psychos (u), the uncanny