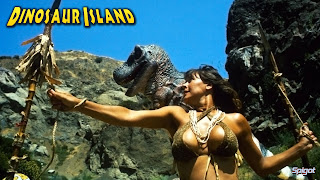 
Though I naturally enjoyed this 1994 Roger Corman salute to D-cups on the visceral level, my main reason for re-watching it was to see whether or not it qualified as a combative adventure. The short answer is "not."

In 1994 co-directors Fred Olen Ray and Jim Wynorski had already established themselves as practiced makers of softcore tit-flicks, and DINOSAUR ISLAND fills that niche adequately if unexceptionally. The 1976 KILMA, QUEEN OF THE AMAZONS has a similar plot-- modern-day men find their way onto an island inhabited by sexy amazons-- but the Spanish flick gives the amazons a little more agency than one sees in this B-flick. Four army guys-- a captain escorting three goofball deserters to their "just desserts"-- crash-land on the island and find a bevy of amazons. The girls have seen outsiders before, and somehow this resulted in a prophecy of great warriors who would save the spear-wielding ladies from "the Great One," a really big (and really badly animated) tyrannosaurus.

The girls don't get to do much, aside from a catfight between Michelle Bauer and Toni Naples over whether or not to kill the intruders. The guys live to challenge the Great One and manage to kill the dino with their advanced weaponry. It's such a straightforward destruction that I didn't think the violence qualified for combative status.

Posted by Gene Phillips at 3:31 PM
Email ThisBlogThis!Share to TwitterShare to FacebookShare to Pinterest
Labels: subcombative adventures, the marvelous