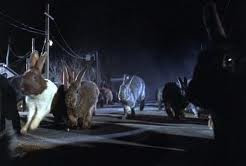 From a punny standpoint it would be tempting, considering these three films about gigantic beings, to pronounce them all to be "a colossal waste of time." But in fact, though none of them rank high in the "giant creature" subgenre, at least two out of three have a few interesting symbolic overtones.

The weakest of the three is the first-named, director William Claxton's NIGHT OF THE LEPUS. I see from a quick look at Claxton's resume that he looks to be a journeyman director with a lot of westerns to his credit. That background is possibly one reason he and his collaborators eschewed any of the satirical content from the novel on which LEPUS is ostensibly based, Russell Braddon's YEAR OF THE ANGRY RABBIT. The creators of LEPUS present their concept much like a western, with such genre stalwarts as Stuart Whitman and Rory Calhoun busy fighting off a horde of killer bunnies, while keeping their faces as straight as if they were battling wolfpacks or wild mavericks.

Of course there's no way the premise could turn out any way but funny, and the risibility is if anything enhanced by the straightforward performances. The central SF-idea-- that of a growth hormone given to one rabbit, promptly passed on to its offspring thanks to the famed procreative powers of the "lepus"-- is also treated with straightforward logic, though the execution is a trifle on the pedestrian side. Had the scripters wanted to make it less so-- though, as I said, there would've been little payoff for doing it-- they might have emulated the classic giANT movie, THEM. It's true that THEM has an advantage: giant formicidae simply look scarier than giant bunnies. But THEM also exploits its motif in terms of what I've termed the Campbellian cosmological function. For the protagonists to conquer the giant ants, the characters have to learn something about the nature of ants. The heroes of LEPUS never have to figure out anything about the nature of rabbits to combat the threat: the killer bunnies, after gnawing a few victims to death here and there, obligingly attack a human installation and get mowed down by flame, gunfire and electrical traps. The only cosmological symbol that comes through strongly is the aforementioned procreative power of the rabbit, as the film ends with a closeup on a normal rabbit, implying a "will it or won't it" vibe.

1957's GIANT CLAW is similarly risible despite its straight-faced approach. However, its script does succeed in conjuring its cosmological motif with greater complexity, and as more than one fan has observed, it might have been one of the better giant-critter features had it not been for the FX used: probably the gooniest looking marionettes ever to appear in a 1950s creature-feature.

Nevetheless, the giant bird-- nicknamed "La Carcagne" on some websites because one character associates the monster with a French-Canadian myth about a giant harpy-like creature-- doesn't scuttle the whole film. Profiting from THEM's example more than does NIGHT OF THE LEPUS, director Fred Sears builds tension for the first half-hour as the winged predator swoops down on Air Force jets and civilian planes alike, seeming like a phantom because it's immune to being detected by American radar. (As I recall the beast never menaces any area beyond North America.) When fighter jets finally do encounter the beast, they find that it possesses a naturally-generated shield of anti-matter, rendering it both invulnerable and untraceable.

No doubt the sci-fi doubletalk justifying the bird's force-field amounts to hogwash in the world of real science. Nevertheless, the heroes have to do a lot of heavy thinking to figure out how the bird operates (absorbing its victim's energies rather than actually eating their flesh), what it means to do on Earth (it's building a nest for a lotta little predators), and how to penetrate that force field by bombarding the creature with "mu-mesons." The principal characters are well-drawn stereotypes, and the action is always brisk, especially when the bird swoops in too quickly for the camera to focus on its overall appearance. Sears' best-directed scene may be the one in which a group of joy-riding teens violate their curfew and fall victim to the bird's attack, just moments before they joke about "putting salt on the bird's tail." Neither the Cold War nor nuclear brinksmanship are directly referenced, though the opening narration emphasizes the work of "free men" to combat evil. There's little doubt that "La Carcagne" embodies, like all good monsters, many of the period's anxieties. Is it a coincidence that the lead female is one of Those Professional Women, yet the Giant Claw is a "traditional mother?"

Finally, there's Bert I. Gordon's VILLAGE OF THE GIANTS, a loose comic take on H.G. Wells' generally-serious novel THE FOOD OF THE GODS.

Wells' giants are emblematic of capitalist society's desire to dominate an underclass. The standout example of this theme is the character Albert Caddles, a young giant raised in captivity by his smaller brethren, who keep him confined to a chalk pit until he finally rises up and is destroyed for his impertinence-- a pretty clear indictment of capitalist society.

Gordon naturally doesn't venture into waters that deep, but even so, he's clearly coming from the other end of the political pool. His giants are a motley crew of delinquents who invade a quiet little town full of nice adults and well-behaved teenagers. The malefactors, led by a dopey-looking Beau Bridges, get hold of a giant-making substance called "goo," invented by a pre-pubescent genius (a very young Ron Howard), and once they've all got as big as their egos, they attempt to take over the town. Eventually they're de-giantized by Tommy Kirk and his teen buddies, the town's adults having come off as pretty much powerless in the face of this form of "burgeoning adolescence."

The sociological myth-motif here is clearly "good teens vs. bad teens" without much embellishment. In contrast to Roger Corman's 1966 biker-flick THE WILD ANGELS, in which the rebellious bikers have some individuality, all of Gordon's delinquents sound pretty much the same, and so do all the good teens. Moreover, despite their ambitions the delinquents, whether giant or not, are all pretty stupid, so it's not easy either to identify with them or root against them as blackhearted villains.

However, Gordon does put across some memorable visual elements despite the script's weaknesses. First and foremost (especially in the advertising) are the breasts. GIANTS is a breast-fetishist's dream-come-true, particularly for the comic bit in which a full-grown teenager (male of course) hangs off a giant delinquent girl's bra, reduced to the image of a nursing baby by "the goo." But the best visual sequence in the film may be the one with which it begins. Bridges and his delinquents, in the midst of driving to Decentville, get stranded when the car craters in the midst of a downpour. Yet, with the invulnerable conscience of youth, the bad teens get out of the car and start dancing in the rain, wallowing in the 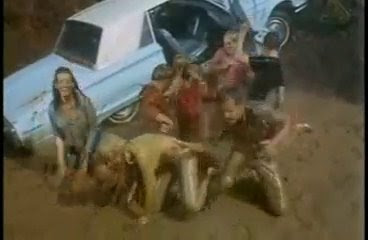 muddy earth in a Dionysian frenzy one hardly expects from Bert I. Gordon. Gordon bookends this scene with a mirror-image at the film's conclusion: defeated, the ex-giants trudge out of town past their dead auto, robbed of their confidence and gusto. On top of that, the delinquents' last act in the film is to set up a final gag, pointing the way to Decentville for a parade of midgets, who have an even better reason to "get tall." But the image of muddy body-worship to the tune of Jack Nitzsche's "The Last Race"-- later appropriated by Quentin Tarantino for DEATH PROOF-- isn't one that can be dispelled by a little bit of goofy humor.

BELATED NOTE: THE GIANT CLAW qualifies to be considered a "combative drama."
Posted by Gene Phillips at 11:36 AM
Email ThisBlogThis!Share to TwitterShare to FacebookShare to Pinterest
Labels: combative dramas, the marvelous