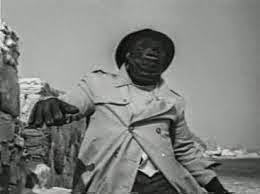 
This long-out-of-circulation flick is not exactly a lost gem. It is, however, a pleasant enough bauble.

To be sure, HAND OF DEATH doesn't even quite come even with a solid journeyman effort like 1958's MONSTER ON THE CAMPUS.   Both films concern scientific researchers who are accidentally exposed to bizarre substances which turn them into monsters, though the fellow from CAMPUS is more in the Jekyll-and-Hyde vein in that he reverts to humanity. Once HAND's victim-cum-monster Alex Marsh is afflicted, his mutation is irreversible.

Even putting aside these differences in content, though, the 1958 film follows a basic three-act structure: scientist becomes infected, scientist slowly comes to grips with his affliction, scientist tries to end the menace of that affliction. HAND OF DEATH, less than a hour long in its surviving state, boils down to two acts: scientist becomes infected, scientist runs around accidentally killing people until the law puts him out of his misery.  It's been suggested that the production company didn't want anything that ran over an hour, for purposes of selling the film as the second half of a B-movie tandem.  This may be the case, though thanks to IMDB I notice that the only other films-- both from 1948-- on which Eugene Ling worked as both writer and producer are just barely over one hour.

Like the fellow from MONSTER ON THE CAMPUS, Alex Marsh (John Agar) doesn't do anything to bring down his evil fate upon his head. At most he's a little obsessed with his pet project: to invent a new nerve gas that will make it possible to end armed conflict: "Do you realize that this could be a weapon so powerful, it could conceivably banish nuclear warfare?" This seemed to me a rather antiquated and over-idealistic take on munitions by 1962; it was just barely believable even in America's pre-war years.)  His girlfriend Carol (Paula Raymond) feels neglected: "This is the first time I've ever heard Alex Marsh actually sound excited about something-- and it obviously isn't me!" Tom, another scientist in the same age-range as Alex and Carol, is clearly hoping to move in if his mentor blows things with Carol.  It's very close in structure to the opening acts of Whale's FRANKENSTEIN, with its suggestion that family friend Victor will be ready to take advantage if Henry Frankenstein bites the big one. Yet Alex is no ranting madman; at most, he's a little stressed from work-- which may bring about the mistake that gives him the "hand of death."

Following the accident, Alex accidentally touches an assistant and kills him.  This, and other scenes in which the scientist murders through a mere touch, provide the film's highlights, and John Agar successfully captures the guilty frenzy Alex experiences at becoming a carrier of death.  However, a "second act" would have allowed the character time to reflect on his dilemna. Alex makes one attempt at a cure, by seeking out an older scientist-- Carol's employer, no less, who was crippled from a not dissimilar research accident. But the affliction mutates Alex further, so that his skin turns black and ropy (explained as a product of advanced cyanosis).  The mutated Alex makes a pretty good monster, and Paula Raymond screams nicely when she sees that he's killed her employer.  After that, Alex futilely tries to disguise himself and escape. But because he loses the power of speech the viewer has no idea what if any long-range plans he has.  The shoot-down by police is somewhat anti-climactic.

Floyd Crosby's cinematography is better-than-average for B-monsters of the period-- better, actually, than that of MONSTER ON THE CAMPUS-- and Sonny Burke's jazzy score contributes some tense moments. Bit-parts are contributed by Joe Besser and Butch Patrick, and I seem to have got through the whole review without mentioning the factoid every one else does; that the Marsh-monster looks a heckuva lot like Ben Grimm of the Fantas--