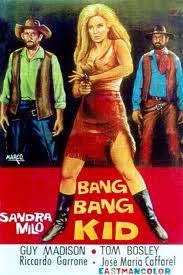 
I've noticed that two or three lobby cards for THE BANG BANG KID, a silly Italian-American comedy-western, emphasize the charms of Sandra Milo rather than the "Kid" himself.  This was a logical move, since Milo is certainly the most entertaining thing in the film.

Milo plays "Gwenda," the tempestuous daughter of the mayor in a small Old West town. She also has a sister whose only purpose in the story seems to be the mild, uninteresting counterpart to fiery Gwenda, who nurses a love-hate grudge against Bear Bullock (Guy Madison), a corrupt landowner who runs the town with his coterie of deadly gunfighters.

Somehow a portly little inventor named Merryweather (Tom Bosley) gets wind of the town's troubles, and shows up with his latest invention: a gunfighting robot made in his own image.  Merryweather doesn't initially want anything except to test his robot "in the field," but Gwenda is so hot to humble Bullock that she promises to marry Merryweather if his robot wins out.

Naturally the robot-- dubbed "the Bang Bang Kid" by some townsman (presumably an Italian Westerner)-- wins his first few challenges easily. However, toward the conclusion the robot is disabled, preventing this quasi-superheroic automaton from taking part in the final battle. This is the film's greatest interest for me, in that it seems to build to a combative conflict but then fizzles out for a joke, much like the far superior film THE COURT JESTER.  Because the robot is out of the fight, Merryweather tries to bluff one of the killers by dressing up like his creation. It doesn't work, but the funny fellow is saved by his allies.

Aside from the film's non-combative status, the only other thing of psychological interest is the way Gwenda fantasizes about humiliating Bullock, up until the point that he renounces evil and turns on his really evil gunmen.  All of which proves that if you look good, you can reform any time you feel like it and no one will prosecute you. 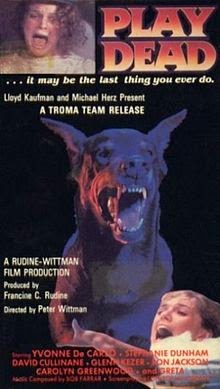 Whenever I see movies based on one or more animals on the rampage, I find myself wondering if the film got started simply because someone or other claimed to have access to "animals able to act."  Once the producers had that element, maybe then they worried about getting the human actors, given that these are a dime a dozen.

The script for PLAY DEAD is the modern equivalent of Old Hollywood's "murder-a-reel" flicks: whenever there's no murder on screen, the script has nothing else to offer. PLAY can't even claim the originality of being first to use a demonic dog as a serial killer, having been aced out by the 1978 TV film DEVIL DOG: THE HOUND OF HELL, which was at least enjoyably bad. This hound of hell can't come up with anything better than strangling one victim with his leash and dropping an electric hair-dryer into another victim's bathwater.

The one possible source of interest here is the film's only "name" star, Yvonne De Carlo. De Carlo plays Hester, who mourns the loss of the man she loved because he married another-- Hester's sister, no less.  Apparently, with the death of her lost love, she decides to dabble in Satanism and summon up a hell-hound to get rid of all her relatives-- I think so that she would be the only living heir, but it was hard to follow.

Yvonne De Carlo, unfortunately, is an actress of limited strengths, and working with this kind of thankless role is not among them. It's long been my contention that De Carlo had little presence in "straight" roles, even her best-written one, Anna in 1949's CRISS CROSS. However, she had fine comic instincts, and distinguished herself not only with her most famous role-- Lily of THE MUNSTERS-- but also many minor roles like a villainess in a GIRL FROM UNCLE episode and a horny madame in 1975's BLAZING STEWARDESSES. But here, even though PLAY DEAD sounds like it ought to have been a comedy, De Carlo's lead role doesn't even throw the viewer a bone.

Posted by Gene Phillips at 3:33 PM
Email ThisBlogThis!Share to TwitterShare to FacebookShare to Pinterest
Labels: the marvelous