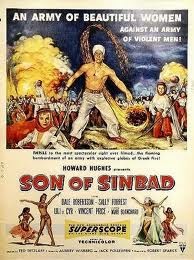 
One of the original Sinbad's feats was to tie himself to the leg of a giant Roc, which creature was called a "Simurgh" in some versions. On that basis I choose to dub this sort of Hollywood amalgam of Arabic motifs-- Sinbad, Omar Khayyam, the 40 Thieves, and the legendary "Greek fire"-- a "simurghasboard."

Bad puns aside, the most interesting thing about SON OF SINBAD is that it's an example of the uncanny motif "exotic lands and customs" set within a faux-historical period. This stands opposed to my more usual application of the term to either narratives set in prehistoric periods (CLAN OF THE CAVE BEAR) or in primitive backwaters within the modern world (just about every Tarzan film).

In the case of SON OF SINBAD, it's not simply that the scripters of the film were ignorant of the temporal difficulties of having the son of Sinbad (the very American Dale Robertson) be best friends with Omar Khayyam (Vincent Price). This conflation is not a simple result of carelessness; rather, SON represents a deliberate lumping-together of Arabic story-motifs, in much the same fashion that makers of prehistory pictures would lump together cavemen and dinosaurs.

SON is usually listed in concordances because a main element of the plot-- which doesn't really bear analysis in itself-- involves the son of Sinbad encountering a weapon unknown to his period or that of Omar Khayyam-- the incendiary explosive "Greek fire." But this is not a marvelous phenomenon, given that it's merely an exotic form of gunpowder. It is an uncanny phenomenon because it appears out of its proper time-frame. At the climax, Sinbad's allies coat arrows with Greek fire and use them to blow up their enemies in much the same way Rambo blasts his foes with dynamite-shafts. It's the same physical phenomenon, but only the former manifestation carries the aspect I've termed "strangeness."

For good measure, the proto-scientist who discovers Greek fire's secret encodes the process for its manufacture within the brain of his daughter, by using a special hypnotic lamp-- hence adding the uncanny phenomenon of "enthralling hypnotism" to the mix.

"Weird families and societies," in turn, is ably represented by an all-female band of warriors, the daughters of the original Forty Thieves, who become Sinbad's allies for the big climax. I'd say that the concept of a band of Arabic Amazons-- all played by glamorous Caucasian girls, of course-- being able to operate in any period of the Islamic Middle East is a greater stretch than the rediscovery of Greek fire. In keeping with SON's avoidance of marvelous devices, the famous cave of the Forty Thieves uses purely mechanical means to "open sesame."

Overall, this is an entertaining bit of Hollywood gibberish, with lots of pretty girls and Robertson ably swashing buckles, at least for this sort of lower-tier product. Vincent Price gets the best lines, intoning pastiches of Omar Khayyam in his usual orotund fashion.

Posted by Gene Phillips at 4:31 PM
Email ThisBlogThis!Share to TwitterShare to FacebookShare to Pinterest
Labels: combative adventures, diabolical devices (u), enthralling hypnotism and illusionism (u), exotic lands and customs (u), the uncanny, weird families and societies (u)