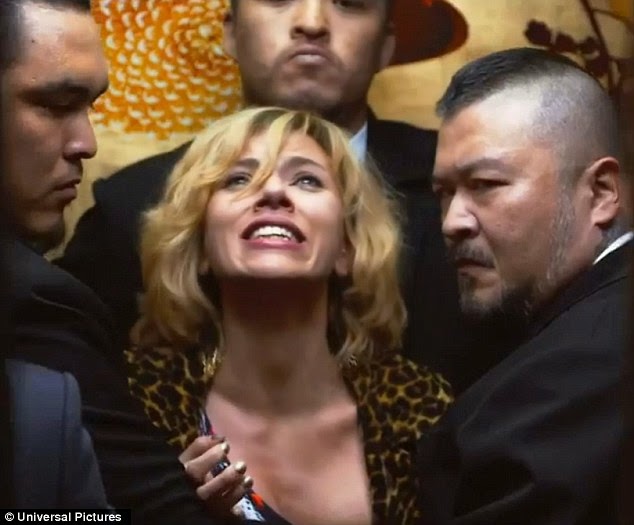 
I won't spend a lot of time on Luc Besson's disappointing LUCY except to say that it might have helped had he gone back and read more mind-blowing French comic books, the same type that inspired him to his signature work, 1997's FIFTH ELEMENT.

The set-up for LUCY has potential. The title character (Scarlet Johanssen), a young girl going to school in Taiwan, is inveigled into making a delivery to a clique of Korean gangsters. They subject Lucy to an operation and place a packet of rare drugs in her abdomen in order to sneak the forbidden substances past customs; then she and some other unwilling drug-mules are scheduled to be flown out of Taiwan to the gangsters' confederates. The young woman seems to have no way to go but down.

As it happens, a few of the handlers charged with getting Lucy out of Taiwan decide to take advantage of her, and when she resists, she earns a kick in the stomach. The blow bursts the packet and her system is infused with the drugs, an artificial version of a natural growth-hormone. Besson's script hypothesizes that the designer-drug unleashes a level of brain-capacity that most humans never use, so that Lucy acquires phenomenal psychic powers. She gets free of her captors and sows a little vengeance on gang-boss Mr. Jang, though she lets him live-- apparently for no good reason but because the script needs a villain to continue providing resistance.  Her main project, however, is to overtake the other drug-mules and harvest the drugs they carry, in order to (a) keep the hormone from killing her, and (b) to boost herself to the full 100% capacity, so that she can implicitly transcend time and space.

As an action-thriller, LUCY is adequate. Unfortunately, despite a script that gives scientist Professor Norman (Morgan Freeman) a lot of ponderous dialogue about evolution and the time-space continuum, Besson's rendering of these profundities is merely banal.  Besson's idea of deep meaning is to show assorted shots of animals in the wild, perhaps with the intention of illustrating the vast complexity of the ecosphere. But frankly, I've seen Disney nature programs that provided better illustration of life's impressive variations. Besson's understanding of metaphysical issues is similarly derivative and undermines the potential of the basic idea. 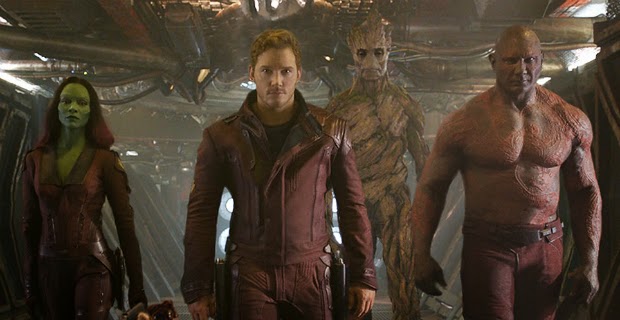 As any number of reviews will have mentioned, GUARDIANS OF THE GALAXY is derived from a Marvel franchise that was never particularly popular: calling it "third-string" might be too kind.  GALAXY, directed and co-written by James Gunn, is clearly modeled after the cinematic example of 2012's THE AVENGERS, in that the earlier film also introduces a motley crew of disparate characters and forges them into a team. However, both the 2012 film and the 1963 comic book from which it derived had the advantage of teaming up characters from independent features, and thus could draw fans of those respective serials. GALAXY introduces five characters who never appeared in any other movie, although a few support-characters showed up in "teasers" for other Marvel films.

On one respect, GALAXY exceeds the 2012 AVENGERS.  The heroes of the latter films are forced to become allies by contingent circumstances, and though some characters like or dislike each other to varying degrees, the shadow of that contingency hangs over the group's formation.  The Avengers exist first and foremost to repel world-endangering threats, not because they admire or like each other.

The main narrative of GALAXY is also informed by a cosmic catastrophe, but here it seems like an excuse to bring together five quirky "losers," as their de facto leader Peter "Star-Lord" Quill calls them.  To be sure, Gunn's GALAXY is a very slick film: every single line has been crafted with the intent of selling this idea of loners who find their real raison d'etre in being parts of a buddy system.  But there's enough humor in the presentation so that the effect is that of discovering new wine in old bottles.

Marvel-fanatics-- and I myself have been such, at times-- should enjoy the film's tendency to pilfer dozens of characters and situations from disparate Marvel features, usually recombining them in reasonably ingenious fashion. For example, Rocket Raccoon's original version was one of several bio-engineered "funny animals," but since this would have no advantage for GALAXY's narrative, the character is reworked as a "one of a kind" experiment. more or less along the lines of Marvel's mutant hero Wolverine.

I will say that Gunn is so intent on keeping the action fast and breezy that though there are a lot of battles-- muscleman Drax taking on his sworn enemy Ronan, the Novacore ships attacking the villain's dreadnaught-craft-- none of them rise to the level of fight-choreography boasted by THE AVENGERS, which made many fans' hearts twitter by presenting live-action jousts between Thor/Hulk, Hawkeye/Black Widow, and so on.

And one other AVENGERS comparison must be made: both in the comics and the Marvel films, the characters stand on their own, each having his or her own mythic resonance.  None of the Guardians acquire such resonance here, precisely because so much Marvel history is being both reworked and shoehorned into the narrative. However, it's not impossible that the probable sequel could improve on this aspect of its motley group of world-savers, and I for one will be in line to see what Marvel Studios can pull off with this latest batch of "loveable losers."
Posted by Gene Phillips at 3:47 PM
Email ThisBlogThis!Share to TwitterShare to FacebookShare to Pinterest
Labels: combative adventures, the marvelous