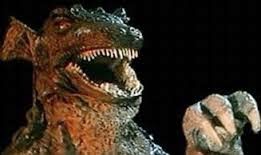 GORGO was director Eugene Lourie's final word on the giant-monster subgenre that he helped initiate in the U.S. with BEAST FROM 20,000 FATHOMS, and to which he had returned with 1959's GIANT BEHEMOTH. GORGO is easily the best of the three, though it seems to sound something of a death-knell to U.S. production of the subgenre, with only a handful of exceptions (VILLAGE OF THE GIANTS, VALLEY OF GWANGI, et al).

I argued in my review of GIANT BEHEMOTH that the film seemed more "mythic" than the 20,000 Fathoms dinosaur, and that I credited this resemblance to cross-pollination from the popularity of the 1955 GODZILLA. Early plans for GORGO dealt with having the monster arise from an island near Japan, just as Godzilla had, but in the end the titular monster first shows his face on Ireland. Rather than making an assault on this island's larger neighbor-- in Ireland's case, Great Britain-- Gorgo is kidnapped from his territorial waters by greedy entrepreneurs, a KING KONG motif that would later be frequently recycled by various Japanese films.

It seems unlikely that director Lourie or any of his collaborators had access to the Japanese GOJIRA, but that makes the parallels even more impressive. GOJIRA is much stronger than its translated version in terms of loosely identifying the giant monster with the primitive rites of the islanders, and Lourie's film follows the same pattern. Long before we see a monster, our viewpoint characters, American salvage-men Joe Ryan and Sam Slade, encounter hostility from the Gaelic-speaking Irish fishermen they encounter. In time the two characters will become like two halves of KONG's Carl Denham character: Ryan being the out-for-himself exploiter, and Slade his conscience, which tries to remind him of the consequences of his actions. There are no parallels to KONG's romantic couple-- indeed, this is one of the few U.S. SF-films of the period to sport no leading lady. In their place we do get an Irish orphan-boy named Shaun, who immediately shows a liking for Ryan even though he, like Slade, doesn't approve of Ryan's actions.

Like Denham, Ryan captures a monster, albeit one a little smaller than Kong. Unlike Denham, who gets no static from the natives whose god he abducts, Ryan does have to deal with the Irish government, who feel they have a claim on the giant reptile named "Gorgo" (though Shaun calls him "Oggra," after some Celtic myth-figure), Ryan makes an end run around the Irish authorities and takes Gorgo to England to exhibit the beast for profit. Shaun stows away on Ryan's ship and Ryan ends becoming the orphan's protector in England-- an obvious set-up for a much bigger parental theme to come.

The idea of a giant monster's bigger parent coming to look for its child probably wasn't totally original even in 1961, but it seems to have had great impact at the time, and influenced a number of Japanese kaiju films as well. Lourie has said that because his own little girl identified with the Beast from 20,000 Fathoms, he wanted GORGO to portray the reptile as a sinless innocent-- and he does get this point across better than many other Kong-imitators, simply by virtue of giving Gorgo a big mamma who comes looking for him.

I'm glad that one aspect of Lourie's original vision for GORGO was overruled by his producers, though. Lourie wanted to have no Godzilla-like conflict with the military, but the producers knew that the audience would expect a major combat between Gorgo's mom and the British armed forces. This running battle is easily as good as that of the original GOJIRA, though I could have lived without yet another revisiting of the "electrical trap" schtick. Perhaps Lourie thought the violence detracted from his sentimental theme of a mother-beast seeking out her child against all odds. I can only say that, without the violence, GORGO's final vision of man being humbled by the powers of the primitive world would have been far less effective. I also note that Gorgo's attack occasions in one British commentator the memory of the Blitz, just as Godzilla's assault duplicates Japan's struggle at the end of WWII.

In the end, I can't quite rate Gorgo as being quite as deeply mythic as either Kong or Godzilla. Maybe it is the parent-child thing; once you get that, there's nothing more to say about Gorgo or his mom, references to the Greek "Gorgon" notwithstanding.
Posted by Gene Phillips at 3:46 PM
Email ThisBlogThis!Share to TwitterShare to FacebookShare to Pinterest
Labels: combative dramas, the marvelous