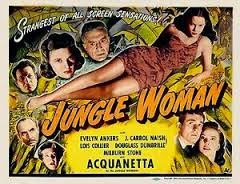 
JUNGLE WOMAN is distinctly inferior in most respects to its predecessor CAPTIVE WILD WOMAN, which isn't much of a downturn since I opined that even the first flick in the series was just "a reasonably compelling B-film." In place of John Carradine's smooth and ruthless mad scientist, sort of a Colin Clive for the B-level, we have a tedious, well-meaning medical doctor who gets latterly involved with another scientist's creation, not unlike the "depressingly stable" Ludwig of GHOST OF FRANKENSTEIN.  This rather boring fellow, Doctor Fletcher, is essayed by J. Carroll Naish, who did considerably better with the over-the-top characters seen in HOUSE OF FRANKENSTEIN and THE MONSTER MAKER.

Similarly, while CAPTIVE boasted the fluid direction of Edward Dymytrk, JUNGLE is burdened with the generally pedestrian pacing of Reginald LeBorg. The original film's plot, while absurd, was at least rooted in the idea that the she-ape who falls for a human male had some time in which to form an attachment to him, via their prolonged association in the circus. Here, the resurrected Cheela / Paula falls for a rather bland young fellow for no particular reason. As with the original target from the first film, the new guy, name of Bob, already has a girlfriend, Fletcher's daughter Joan, so maybe one can argue that Paula obsessively wants whatever she can't have-- or something.

The film does sustain two sources of interest, though. First, if one has seen the original film, it's amusing to see how the scriptwriters attempted to elide as much as they could of Paula's origins, in order to simplify the film's narrative for new audiences. Thus, in order to minimize the role of Carradine's Doctor Walters, the script makes the peculiar statement that Cheela's transformation into an ape-woman was initiated by some unnamed mad scientist in Africa, and though Walters does figure into the recapitulated story, he's given a more minor role, as of someone who simply stumbled into the ape-woman's situation-- though no one new to the story would really be able to figure out what role Walters had played from this confused script.

Paula's original man-crush and his girlftriend make minor appearances in order to provide some linking material, and then they disappear from the narrative, which is then just one set-up after another of Paula stalking either Joan, or Bob and Joan together, until Dr. Fletcher finally sees fit to end her rampage in a very anti-climactic manner. The story is actually told in media res, much like 1940's BLACK FRIDAY, but without achieving even that film's modest suspense via the device. However, the fact that Paula is hardly ever a real "ape-woman" in the second film leads us to its only other source of merit: it features a much more active female menace. Acquanetta was a distinctly limited actress, but even though she probably didn't weight much more than a hundred pounds, LeBorg does manage to make her seem both exotic and menacing, particularly thanks to an early scene where she's seen crushing a metal ashtray in her hand.

Overall, JUNGLE is mostly interesting for the familiar faces of Universal, and only secondarily as entertainment in itself.
Posted by Gene Phillips at 3:48 PM
Email ThisBlogThis!Share to TwitterShare to FacebookShare to Pinterest
Labels: the marvelous