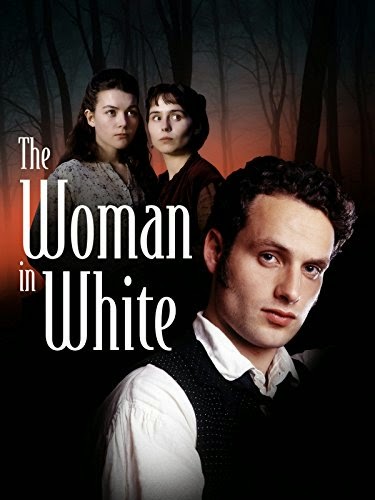 
I had not read Wilkie Collins' THE WOMAN IN WHITE when I reviewed a 1940 film based partly on its storyline, Tod Slaughter's CRIMES AT THE DARK HOUSE. In that review I wrote:

Whatever the phenomenality of the Collins novel, this film is entirely in a naturalistic universe, and only the killing-by-spike even registers as a "bizarre crime."


As of last January I've read the Collins novel, and commented on it here. The book is, as I suspected, entirely naturalistic, and though no one gets killed with a spike, there's still a "bizarre crime" in the involved plot that condemns a sane woman to take the place of an allegedly mad one in an insane asylum-- an element totally omitted from the Slaughter film.

I've seen some IMDB comments about this 1997 BBC telefilm, mostly about how much the telefilm departs from the source novel. However, the original book is a very talky epistolary novel, and any producer worth his salt would have to change it around somewhat to keep from putting the audience to sleep.

WOMAN eschews Collins' multiple narrators, focusing principally on the character of Marian Fairlie, the "plain" sister of beautiful Laura, who will eventually be the victim of the scheming Count Fosco and his pawn, the faux nobleman Percival Glyde. Script and direction frequently "jazz up" many of the key scenes for greater visceral impact. For instance, in the novel the young swain Hartright falls in love with Laura, and she reciprocates. Hartright doesn't even try to wed the aristocratic young woman; she's out of his class and his monetary range.  The adapters evidently thought this needed to be more dramatic, so Fosco contrives a plan to ruin Hartright in Laura's eyes, by bribing a maid to say that the young fellow approached the serving-girl for sex. This contrivance blurs the novel's social critique by making Fosco the villain rather than the British class system, yet it must be admitted that it's one of many contrivances that moves the adaptation along at a refreshingly brisk pace.

One of Collins' other major themes, the marginalization of women, takes slightly different form in WOMAN than in the novel, but I think the telefilm is still basically true to that theme. The plot perforce deals with Laura's unhappy marriage to Glyde and the subsequent attempts of the villains to gain access to her fortune, and both original and adaptation demonstrate the basic inequity of the British wife before her lord and master. The adaptation places more narrative emphasis upon some of the examples of men preying upon women, to the extent that Marian actually feels implicated in her father's peccadillos-- which is a little further than Collins goes. However, because the film elides the character of Jane Catherick-- again, probably in the interest of jettisoning more talky scenes-- one does not see the converse, in which women sometimes gain monetary advantages over men due to the latter's sexual needs. The character of the maid is given some of Jane's lines, but she doesn't put across the same dynamic. In order to abbreviate the reasons why Anne Catherick is unjustly sentenced to the asylum, the film creates a relationship between Anne and the Glyde impostor. It's rather arbitrary, but again, I can understand wanting to avoid the more involved backstory.

The most notable disappearance is that of Count Fosco at the climax. Glyde meets his maker pretty much as in the novel, though Marian is more involved in that fate, but Fosco simply vanishes afterward. Considering how Collins had to tweak coincidence to give Hartright a weapon with which he could destroy the Count in the novel, it's just as well that this plot-line was dropped. Still, Fosco's escape mars the adaptation's end. Overall, though, WOMAN is an eminently serviceable introduction to one of those Victorian novels almost no one reads any more.

Posted by Gene Phillips at 3:47 PM
Email ThisBlogThis!Share to TwitterShare to FacebookShare to Pinterest
Labels: bizarre crimes and crimefighting (n), the naturalistic