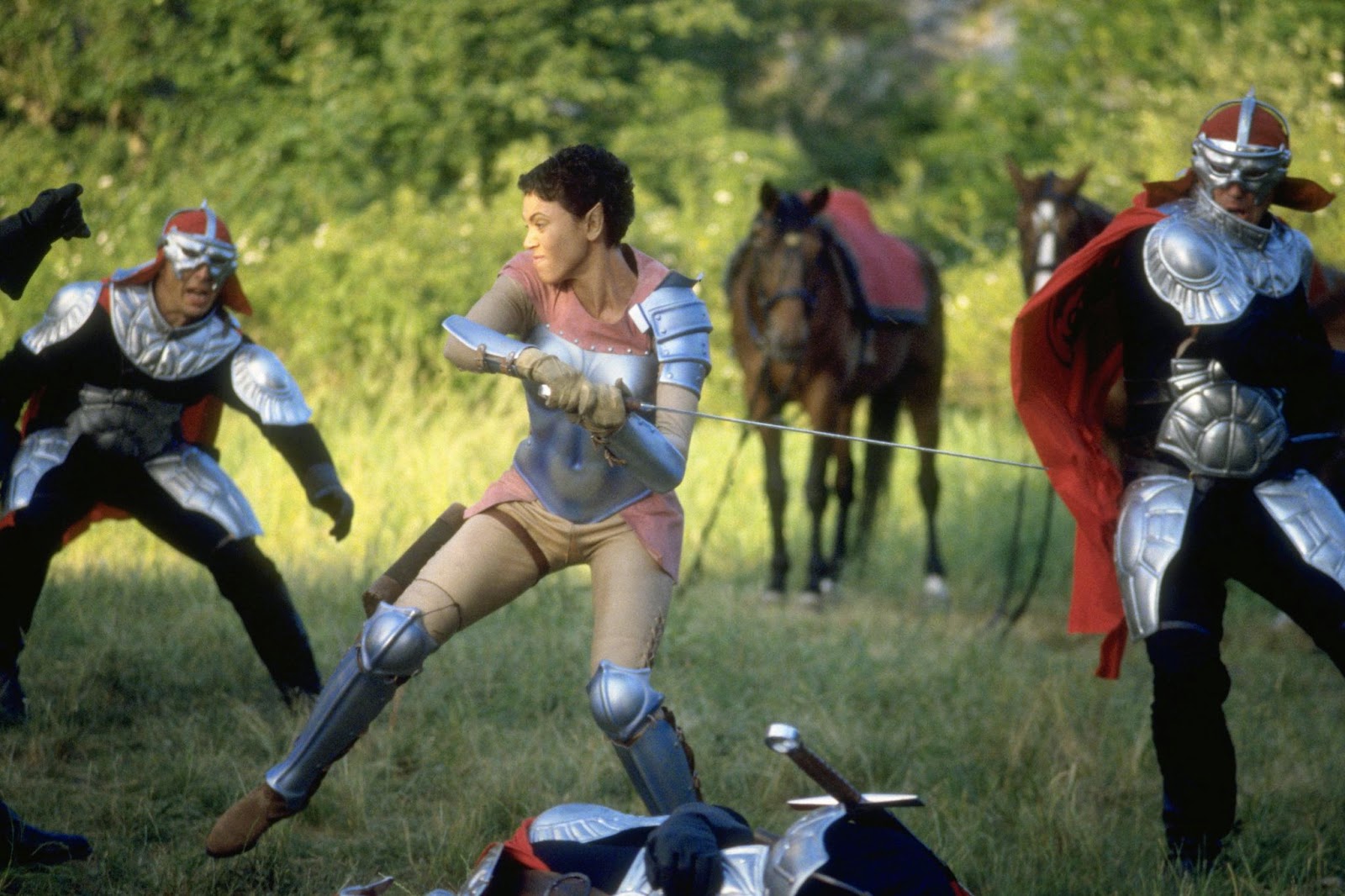 
It's been fourteen years since I watched this notorious flop on DVD, so I re-watched it today, wondering: would I see anything that I'd missed before? It's rare, but every once in a while I re-screen a film that I didn't like on the first go-round, and find interesting tropes in it, even if it's reviled by most of its audience. If I could get something on a second viewing of PHANTOM FROM 10,000 LEAGUES,  maybe even a film widely despised by its target audience might have some buried nuggets.

Not so; a second viewing of DUNGEONS AND DRAGONS fills me with the same repulsion for its inert, clueless storyline. Its main sociological theme follows a basic "aristocracy vs. the people" pattern, in which the mages of the otherworld Izmir stand in for the corrupt aristocracy, ruling the magic-less common folk with an iron hand. One good mage, the Empress Savina (Thora Birch), stands against corrupt magic-wielders like the primary villain Profion (Jeremy Irons), but even though she's called an empress, she doesn't seem to have much in the way of political support. Her first lines in the film have her prating about how she feels "in her heart" that political liberation is the way of the future. Instead of a strong, beleaguered leader, she sounds like an old hippie. But Profion must think that she poses some kind of threat, for he's working on a plan to obtain mystical control of Izmir's dragons, which he will use as shock troops against the Empress.

While all this is going at the higher levels, two young thieves from society's dregs-- Ridley (Justin Whalin) and Snails (Marlon Wayans)-- decide that they're going to break into the city's Magic School and steal valuable magical doodads, apparently with the idea of selling them. The script takes no pains to figure out what kind of market there might be in this fantasy-world for stolen supernatural artifacts; it just takes it for granted that these two low-class thieves think they can somehow turn a profit with their hastily planned endeavor.  (Maybe I should say Ridley's endeavor, since for the most part he talks his reluctant partner Snails into the adventure-- more on which later.)

The two youngsters successfully break into the school, but they're stymied by the spells of neophyte sorceress Marina. Fortunately for the thieves (sort of), on the same night Profion's evil henchman Damodar (Bruce Payne) comes calling with his soldiers, seeking to steal a map desired by his master. Marina gets hold of the map, creates a teleportation-portal, and escapes the school, taking Ridley and Sanils along with her for no good reason.

The scripters apparently thought that, in order to imitate the RPG, they had to send the protagonists on a journey, fending off evil pursuers and making allies. Said allies include an armor-clad female warrior-elf (seen above) and an axe-wielding dwarf who, if the script were honest, would have been named something like "Gimli Mark Two." However, even though Ripley and his allies run around through some very nicely designed sets-- which reflect the $35-million budget-- all of the dangers they encounter, like the villains Profion and Damodar, suffer from a poverty of the imagination. Ridley, in the long-running tradition of the "Thief Who Gets Religon," pretty much forgets about his monetary motivations once Marina presents him with the chance to overthrow mage-rule. Snails never catches the idealism bug. The only reason the film gives for him to go along with the others is that Damodar has put out wanted posters on the refugees, so perhaps one can reason that he doesn't want to be caught alone. His allies don't end up doing him much good, though, for Damodar catches up to them. The wizard kills Snails when he won't give him what he wants, which makes for a sort-of heroism on his part, though the way it's played doesn't give Snails much in the way of dignity.

Damodar finally gets the magical doohickey his master wants, and once Profion has the doohickey, he declares dragon-war on Savina. Ridley, eager to avenge Snails, throws himself into the fight, though where he acquired above-average swordfighting-skills, no one knows. He ends up bringing down both Damodar and Profion, while Marina, the elf and Gimli II provide only modest aid.

The worst thing about DUNGEONS-- aside from the fact that there are hardly any dungeons in it, just dragons-- is that few of the characters have even half-decent reasons for acting as they do. I assume that the producers' main model was Lucas's STAR WARS, but even though Lucas's characters seem sketchy at first glance, they are internally consistent in most regards. The relationship of Ridley and Snails is particularly objectionable.  I don't automatically invalidate the antipathy of some critics to the trope of "hero's partner gets killed to give him a reason to get mad," an antipathy that becomes most pronounced when the main hero is white and the partner is not. But even if both thieves had shared the same ethnicity, their partnership would have been ill-defined. As it is, it's hard to believe that the film's producers didn't see the disadvantage in having a black actor play the part of a perpetually-scared sidekick with a name connoting "slowness."

The one good thing about DUNGEONS is that it disproves the adage that the public will always buy crap, for the film was unpopular both with the mass audience and the core D&D enthusiasts. The two made-for-TV sequels didn't redeem the franchise, but as I'll show in future reviews, they're at least tolerable entertainments.