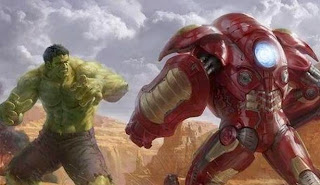 I find nothing stranger about the reception given AGE OF ULTRON by comics fandom than the complaints that it didn’t give the character of the Black Widow a satisfying character arc. While I was not mesmerized by a romantic linkage between Natasha Romanoff and the Hulk’s alter ego Bruce Banner, the two of them shared an arc far more impressive than any other hero in the movie got.

Consider the poor God of Thunder. He gets some nice moments bonding with the other Avengers over the manly art of hammer-lifting. But as far as the plot is concerned, Thor is just there to play cosmic cop, trying to round up stray Asgardian tech. Oh, and he has a vision that alerts him to the future menace of the Infinity Stones, which isn’t directly relevant to the ULTRON story, though the plot-thread of the Stones does serve as a lead-in to the cinematic incarnation of the Vision.

Captain America doesn’t get much better character treatment. He’s still the moral bastion of the group, laying bare the hubris of Tony Stark’s actions in creating Ultron.  But his extended hand-to-hand battle with Ultron serves no purpose in the plot, and long-time comics-mavens may find Captain America's survival against Ultron hard to swallow. Cap too has a vision designed to make him uncertain of his actions, but it amounts to nothing more than penny-ante nostalgia.

Iron Man’s treatment may be the worst of the batch. I fully understand why writer-director Joss Whedon chose to make Stark the creator of Ultron. There was no question of shoehorning any version of Henry Pym, Ultron’s comic-book “daddy,” into this already overcrowded flick. Stark could have made a passable 21st-century Frankenstein, given his need to exceed his own father and his belief in solving all problems through technology. But Stark’s creation of Ultron is rooted in a plot-contrivance-- a vision of the death of his avenging buddies-- rather than in his established character. It’s perhaps appropriate that this is the film to introduce the character of the Vision, for visions are also the way Whedon moves most of his character-arcs forward—visions created by Whedon’s version of the Scarlet Witch.

This mistress of mental magic also wreaks similar incapacitating delusions on the minds of the Hulk and the Black Widow, but their shared arc benefits somewhat from beholding their worst nightmares. At least their nightmares don’t serve as arbitrary plot-points, as they do with Thor, Cap and Iron Man. Early in the film Banner’s fear that his monster will elude his control and hurt people is mirrored by Romanoff’s anomie at having been created to be a government-sponsored “monster:” a trained assassin who’s implicitly got a lot of innocent blood on her hands.

The Scarlet Witch, who dispenses these intense hallucinations to most of the Avengers, does so early in the film because she, like her brother Quicksilver, bears a grudge against Avengers-patron Tony Stark. This plot-line doesn’t come to much of anything, either, for its only purpose is to bring the mutant twins into contact with the Avengers. This is important purely because one of them—the one who, in the comics, became one the group’s most enduring members—ends up joining the super-group in the movie as well. But take away the contrivance of the twins’ reason for hating Stark, and they too fall apart at the seams.

Hawkeye gets a little better treatment. While in his other film-appearances he’s something of a cipher, just another cog in the SHIELD wheel, in ULTRON the archer becomes in this Whedon-outing the exemplar of the “normal life” denied to most super-heroes. Hawkeye’s conversations with his wife carry the resonance of the “noble soldier” who wants to remain home but feels compelled to serve the greater cause. This is a far cry from the comics’ sassy scofflaw. However, though Hawkeye’s soldierly soliloquies run on a little too long, the revelation of his home life throws into relief one of the biggest problems with the AVENGERS franchise in any medium.

Marvel Comics has successfully defined its characters in all media as fluid entities capable of change. But the original concept of THE AVENGERS, as introduced in 1963, took its inspiration from DC’s JUSTICE LEAGUE, which teamed up DC’s foremost heroes in what remained, from a characterization standpoint, very static adventures. Stan Lee may have realized this problem early in the evolution of the series, for he quickly wrote the Hulk out of the group and did the same for Thor and Iron Man fourteen issues later. From then on, though the “big guns” came and went in the AVENGERS comic, the feature was primarily defined by the characters who, unlike characters with their own features, could change and grow, like Hawkeye, Scarlet Witch, and the Vision.

Did Whedon feel similar constraints in using Iron Man, Thor, and Captain America in ULTRON? Future plotlines with the latter two may not have coalesced as yet, and there’s no certainty that there will be another IRON MAN feature if Downey chooses not to reprise the part. Whatever the reason, AVENGERS: AGE OF ULTRON has the feeling of a weak second act that may or may not yield a more resonant third act—be it the Infinity Stones megillah or something else.

It’s not my usual practice to review the characters of the film rather than the plot, but I have an excuse: there really isn’t much plot to review: the result of a poor conception of the villain of the title. While I’m not opposed across the board to a writer inverting the nature of a popular character, I think said writer needs to be doing it for well-considered reasons. In the comics, Ultron is a raging Oedipus Complex on the loose: a man of metal who despises his mortal creator simply for being made of fallible flesh. Whedon, known far and wide for his facility with snappy patter, unfortunately decided to make his robot rogue into a smooth-talking ironist in love with the sound of his own voice, and the casting of that voice as the urbane James Spader only worsened the problem. Mechanisms who decide that their creators are either undesirable or redundant have a long history in science fiction, and one AVENGERS continuity even gave the Sentinels the idea of wiping out mankind to prevent mutation. But Whedon does not provide any good reason, whether of passion or cold logic, for Ultron to desire the death of humanity. There may have been some dim idea of having Ultron mimic the metrosexual stylings of his “father” Tony Stark, but if this was the idea, it wasn’t pursued with any depth. The relationship between Ultron and the Vision in the comics, also a sound extension of Oedipal concepts, lacks any emotional resonance in ULTRON, and Ultron’s plan for destroying humanity may be one of the worst ever conceived in any medium.

That is not to say that entertaining moments in ULTRON are entirely lacking. The outstanding scene is the film's big FX-set-piece, a battle between the out-of-control Hulk and Iron Man, clad in “Hulkbuster” armor. I noted in my review of IRON MAN 3 that I did not like the IRON MAN franchise letting the hero utilize a bunch of Iron Man-like robots as his helpers; “my” Iron Man only put himself on the line in his battles with evil. Therefore I was certainly pleased that Ultron took control of these annoying automatons to use as his shock troops. Even if the Avengers’ battles with Ultron lacked something, at least I enjoyed seeing these suckers get picked off.

There are lots of Marvel trivia scattered throughout the story, particularly the suggestion of a Black Panther-Klaw storyline of some sort, and of course the de rigeur appearance of Stan Lee. But the promise of the original AVENGERS has already begun to dim.

Posted by Gene Phillips at 3:00 PM
Email ThisBlogThis!Share to TwitterShare to FacebookShare to Pinterest
Labels: combative adventures, the marvelous