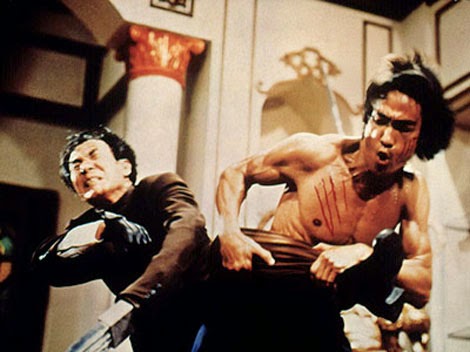 "Man, you stepped right out of a comic book."

Despite this remark by Jim Kelly's character "Williams," Bruce Lee's ENTER THE DRAGON doesn't appear in most (if any) compendiums of fantastic film. I tend to believe that this is not because DRAGON lacks the content necessary for an uncanny film, but that in the minds of most viewers, the genre "martial arts flick" overpowers all other considerations. I've observed a similar phenomenon of "genre-precedence" in many mystery-genre films, with particular reference to 1976's MURDER BY DEATH.

I admire DRAGON but I don't have a lot to say about its story-line. Like many spectacle-oriented narratives there's not a strong interplay of plot and character. Rather, DRAGON functions largely to link together assorted kinetic martial-arts scenes. There's a slight invocation of a "Three Musketeers" alliance between Lee's character "Lee" and two other fighters, Roper and Williams. But since Williams dies halfway through the film, there really isn't much more than a transitional bond between the two surviving heroes. Since DRAGON is a film about spectacle, then, I'll concentrate on the ways in which it provides viewers with spectacle by drawing on the tropes of fantastic cinema.

The cinema of James Bond, rather than comic books, was probably the proximate influence on the DRAGON script. In the 1960s Lee had attempted to break into the big time in Hollywood with no great success, though his reputation as TV's Kato allegedly helped launch him as a star of Hong Kong martial arts films in the early 1970s. Those films, which harvested international box office, certainly paved the way for DRAGON, which pits Lee's kung-fu warrior against a foe of near-Bondian proportions. Han, a petty warlord on an Asian island, seems strongly based on Fleming's Doctor No, but where No simply has metal hands, Han is missing one normal hand but can insert a variety of attachments in place of the missing organ.

Long before Lee is given a personal reason for hunting down Han (the villain indirectly causes the death of Lee's sister), Han is depicted as a rogue Shaolin student, and thus may represent a "negative image" of Lee the loyal practitioner.  British Intelligence contacts Lee and somehow arranges for him to join Han's tournament in order to gain intel on the warlord's crimes of drug-dealing and white slavery.  In contrast to Lee, Han apparently invites both Roper and Williams because he wants to use them to facilitate his drug-dealing operations-- a motive that doesn't hold up well, given that neither man is a literal criminal, much less possessing any "insider" status with American organized crime.

Lee's formidability in his fights is amazing; even in scenes where he's attacked by many guards, he's only rarely tagged by them. But though his untouchability may strain the viewer's credibility, in a narrative sense his skills fall within the boundaries of the naturalistic. Whatever metaphenomenal content the film has, then, centers around the character of Master Han.

In this 2012 essay on THE ARCHETYPAL ARCHIVE, I made this observation without having seen the film in several years:

...had Bruce Lee's character (also named Lee) simply battled the villainous Han in a more mundane setting, that would have removed one metaphenomenal element from the film.  However, the idea of a villain trapping a hero in a "hall of mirrors" goes quite a bit beyond the habits of even the most inventive of the naturalistic villains... A hall of mirrors certainly does not violate our ideas of causality, so it is not metaphenomenal in any cognitive sense, but because it does suggest the metaphenomenal in an affective sense-- pushing Han more toward the domain of the supervillain proper...


I still consider that the "hall of mirrors" scene conveys a tone of uncanny strangeness. I don't think Han ever gives a reason for its presence on his island, so it must exist for no purpose than to torment victims. However, though it's the only metaphenomenal device in Han's compound-- and I won't count the sliding metal doors with which Han traps Lee prior to the big concluding battle-- Han's interchangeable hand-attachments are an "outre" device in their own right.

Granted, I haven't as yet reviewed any films that made use of this particular device. I came close with 1946's TARZAN AND THE LEOPARD WOMAN, but the hero's leopard-man villains don't just wear claws on their hands; they dress in leopard-costumes as well. There don't seem to be a lot of films where the uncanny phenomenality stems from nothing but a character having a claw-hand, though I would definitely count 1947's DICK TRACY'S DILEMMA. Obviously, the presence of a claw-hand in itself does not confer the uncanny tone; it has to be used in a certain way not found in isophenomenal dramas like THE BEST YEARS OF OUR LIVES (also from 1946).

Han's metal hand is definitely used to lend the villain a superhuman aspect in the first scene that reveals it. Han confronts Williams, accusing him of being a spy. After Williams disposes of a couple of the villain's guards, Han engages with the hero. Williams grimaces in pain from the blows of the metal hand, given that he has no knowledge of Han's special advantage, and it's broadly hinted that this advantage allows Han to taste victory and kill Williams.

Now that I have re-screened the film, I'd say that even without the mirror-maze scene, Han's weird attachments are enough to give the film a sense of that aforesaid strangeness. Most viewers remember the nasty long metal claw with which Han slices Lee during the maze-scene. 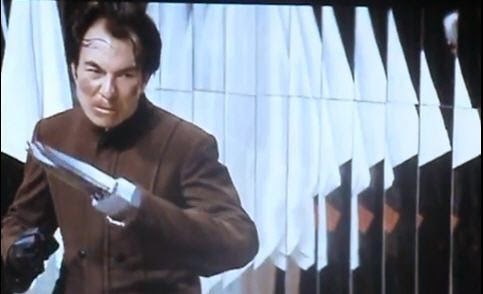 However, in some ways, his other claw, which resembles the paw of a beast, better symbolizes Han's status as a "super" villain. Interestingly, after Han's defeat and death,the film ends on a shot of the beast-claw embedded in a table. Perhaps this signifies the defeat of a human beast by the morally superior Lee (and to some extent, also by his ally Roper, who becomes something of a "hero in a breach")  But given that director Robert Clouse wasn't exactly known as a paragon of subtlety, this concluding detail is more likely to have come from original scriptwriter Michael Allin or even from Bruce Lee himself.

Posted by Gene Phillips at 12:47 PM
Email ThisBlogThis!Share to TwitterShare to FacebookShare to Pinterest
Labels: combative adventures, diabolical devices (u), superlative skills (u), the uncanny