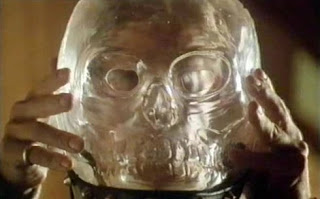 I've been slowly working my way through Mill Creek's SCI-FI INVASION DVD-collection, and though I like a good bad film as much as the next SF-fanatic, there aren't many diamonds amid all this refuse. Here I'll lump together three of the films that belong to the mythos of adventure, though all three are pretty punk examples of that mythos, or, really, of anything.

Italian director Ruggero Deodato has established a strong rep for doing serviceable trash-films, such as LONE RUNNER, appearing just three years after RAIDERS OF ATLANTIS. But RAIDERS is an incompetent hodgepodge that fails even as popcorn entertainment.

A Russian submarine sinks, releases radiation, and somehow triggers the rising of Atlantis. Deodato, having no budget to even suggest such an event, relies on the mere suggestion of the city's re-surfacing via lots of splashing water. Two American soldiers of fortune are at sea when they witness the event: a dull white guy named Mike and a dull black guy whom Mike usually calls "Wash" despite the black guy's occasional demand to be called "Mohammed."

Since Deodato can't afford the rising of Atlantis, Mike, Wash, and the lady scientist who hired them zoom back to land-- IMDB says it's supposed to be a Caribbean island. Somehow, an Atlantean invasion force called "the Interceptors" gets there first, massacres almost everyone, and turns the city into a wasteland. Although the Interceptors are supposed to be the heirs to whatever great technology allowed the city to survive under the sea, they look like nothing more than a bunch of rejects from a MAD MAX imitation, dressed like biker-punks, driving motorcycles and cars with weird decorations. They also don't have any weapons but standard firearms, though the leader wears a mask modeled on the "crystal skull" artifact unearthed in the 1920s. The Interceptors don't talk much and don't seem to have much of a game plan, but they do kidnap the lady scientist and take her back to Atlantis, to be their new queen. Deodato manages to have Mike and Wash rush to the rescue while not seeing much more of Atlantis but a bunch of empty chambers (though one has in it a statue that shoots laser-rays), a central monitor that shows the faces of the Atlanteans, and a big pair of glass shapes that are apparently supposed to represent the dome of Atlantis. MIke and Wash fail to save the woman from the Atlanteans, retreat to their helicopter to get out before the dome closes, and-- hey! Somehow the lady not only freed herself of the Atlanteans' control, she got there ahead of them!

I pity the poor audiences who may have actually seen this travesty on a big screen.

With a title like ROBOVAMPIRE, one can only go up-- particularly since the title character, an Asian clone of Robocop, is actually named "Robowarrior." A group of drug-smugglers enlist a Taoist priest to help them battle drug-enforcement agents, which the priest does by unleashing on the cops a bunch of Chinese hopping vampires. For good measure, the priest also has control of a male vampire who looks something like a bat, and a female ghost who was once the inamorata of the bat-guy.

Fortunately for the cops, one of their number, a fellow named Tom, gets gunned down, so the cops turn his body over to a convenient scientist, and he creates-- Robowarrior! The battles between the robot-cop and the various ghoulies might be good for a laugh if you were in the right mood. I have to say that for me, ROBOVAMPIRE doesn't reach the heights of absurdity required for "so bad it's good." 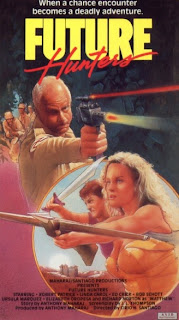 In most respects Cirio Santiago's FUTURE HUNTERS is every bit as dumb as the other films. A man from the future travels back to 1986, bearing with him the spear that wounded Christ (I think). Two young fortune-hunters, ex-marine Slade and his girlfriend Michelle, take custody of the spear-head when the future-guy dies, after he tells them that they can prevent the holocaust that will overtake his time. They never really do find out how they can do this, because they're immediately pursued by a Nazi collector of rare objects, who brings a small army of henchmen with him. Trying to find someone who knows what they should do next, Slade and Michelle journey to the "Venus Valley," looking for a lost scientist who might know the score. The Nazis pursue, eager to gain the object that will help them rule the world (or maybe destroy it?), and our heroes must also face off against midget Mongolians and a tribe of primitive Amazons.

Yet, even though HUNTERS is stupid, at least it keeps a sense of forward motion, and the cheesy sets and costumes reinforce the sense of fun. As an extra added attraction, famed kung-fu actor Bruce Li has a small part as the couple's taxidriver, who unveils his superior Shaolin technique and comes to Slade's aid when the latter is beaten up by an aged kung-fu monk.
Posted by Gene Phillips at 3:47 PM
Email ThisBlogThis!Share to TwitterShare to FacebookShare to Pinterest
Labels: combative adventures, the marvelous