CANNIBAL WOMEN IN THE AVOCADO JUNGLE OF DEATH (1989) 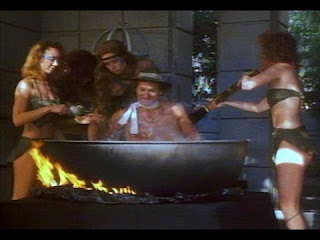 I hadn't seen CANNIBAL in many years, and I didn't have particular vivid memories of it. To my surprise, even though the script by director-under-a-pseudonym J.F. Lawton is far too dependent on pop-culture jokes, the first hour of the ninety-minute film is fun.

I didn't remember that CANNIBAL was based *very* loosely on Conrad's HEART OF DARKNESS, but in one sense the Lawton film is closer to the source than the more famous APOCALYPSE NOW. As I interpret the Conrad novel, the author wanted to portray both the colonizing Europeans and the colonized Africans as blithering dunderheads. It's an ironic view of humanity as a whole, even if the enormities of Kurtz, the "white man gone more native than the native," push the irony closer to the realm of tragedy.

In place of a satirical attitude toward both the colonizers and the colonized, Lawton opposes the fatuities of both men and women in a post-feminist age. The title's "Avocado Jungle of Death" is an exotic jungle-land hidden within the fastness of Southern California. Within the jungle dwell the no less exotic "Pirahna Women," an Amazon tribe with the habit of devouring any males who trespass on their domain. In contrast with most cinematic Amazon tribes, there's no reference as to how the tribe perpetuates itself-- though, since the Pirahnas are an extreme offshoot of modern feminists, it may be that they are continually welcoming disaffected women, rather than mating with men to swell their ranks.

The U.S. government asks feminist scholar Margo Hunt (Shannon Tweed) to seek out the Pirahna Women. Allegedly the jungle is America's only source of home-grown avocados, so officials want to move the tribe out of the jungle and give them all Malibu condos. Margo doesn't relish this contra-feminist agenda, but accepts the mission under coercion. She's accompanied by one of her students, an airhead named Bunny, and a klutzy, anti-feminist male guide, Jim (Bill Maher), with whom Margo had a one-night stand. During most of the journey Margo and Jim snipe at each other, while the brainless bunny serves as a Goof Chorus. Not all that much happens during the trek, except for the trio's encounter with a tribe of anti-masculinist men who idolize Phil Donahue and Alan Alda. However, Lawton's script keeps the barbs flowing against both men and women, disarming any expectations of an agenda. 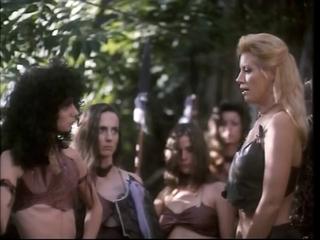 Unfortunately, the film falls apart in the final half-hour, once Margo and her comrades reach the domain of the Pirahna Women. There's the expected revelation that the tribe's current queen is a lost feminist scholar-- naturally named Kurtz (Adrienne Barbeau)-- but Lawton doesn't really use this Kurtz as anything but a vehicle for a few facile jokes. In addition, despite the script's early intimations that Margo and Jim might get together again, Lawton belatedly introduces a romantic relationship between Jim and Bunny-- as well as briefly showing Bunny get seduced by the Pirahna's vision of radicalized feminism. Margo has to run for her life, but after making an alliance with a neighboring tribe of "Barracuda Women," she returns to challenge Kurtz and save Jim from the cooking-pot.

Even in a comedy, the conclusion seems to demand some spectacle, but Lawton allows the climax to peter out very anti-climactically. In place of the sacrificial death seen in APOCALYPSE NOW, the tribal queen and her challenger fight it out-- but it's a dull, half-hearted battle; so that I can't deem the film *combative* since both fighters seem pretty inept. It may be that Lawton simply had no money to hire a fight choreographer, or maybe one or both of the actresses weren't willing to do more than the minimum required. I don't know what sort of ending might have resonated better. I certainly didn't care that Margo and Jim fail to become "an item," but I felt that because Lawton raised the question of their relationship, he should have found a better answer for said question.
Posted by Gene Phillips at 2:51 PM
Email ThisBlogThis!Share to TwitterShare to FacebookShare to Pinterest
Labels: exotic lands and customs (u), the uncanny