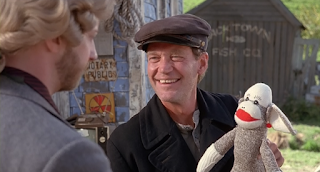 
For years after CABIN BOY flopped, the film's co-producer David Letterman-- who had a cameo appearance in the flick-- used his scene as grist for his talk-show's comedy mill.

The movie, a vehicle for quirky comedian Chris Elliott, is a mixed beg. Like many 1990s films starring Saturday Night Live alumni, CABIN BOY plays like an extended sketch. Elliott plays Nathaniel, an overprotected aristocratic youth (implicitly a character much younger than the actor hismelf) who leaves his "fancy-man" college to go on a cruise. Like the protagonist of Kipling's CAPTAINS COURAGEOUS, this young scion of the upper class gets on the wrong ship; in this case a fishing-scow full of sailors who work for a living and can't be bothered with upper-class fripperies. Unlike the Kipling book, the hero's efforts to get back to civilization propel the ship into a forbidden stretch of ocean inhabited by bizarre fantasy-creatures like giants and ice-monsters.

Nathaniel is intentionally a one-note character. following a pattern that Elliott had established in earlier appearances and that he continued to play, with variations, in many subsequent (mostly supporting) roles. But Nathaniel is brought out of his narcissistic cocoon, not so much by the rigors of sea life, but by meeting a long-distance swimmer named Trina (Melora Walters). Nathaniel falls for Trina but she doesn't reciprocate-- at least, not as long as she deems him a silly-ass virginal boy. In the film's most psychologically interesting scene, as soon as Nathaniel manages to get his rocks off with a multi-armed goddess, Trina suddenly becomes interested in him.

The odd thing about CABIN BOY is that if one described the bare plot on paper, it would sound like Nathaniel actually does "toughen up" due to his life at sea and the rigors of the fantasy-land. The film even gives Nathaniel a heroic climax: when the goddess' giant-husband comes after Nathaniel to kill him, the giant is partly forestalled by one of Nathaniel's allies, a friendly merman (Russ Tamblyn). However, it's Nathaniel himself who managed to slay the colossus, by the heroic act of climbing up the giant's shirt, looping a belt around his throat and strangling him. Nathaniel is so seduced by the heroic life that after he's returned to civilization, he decides that he'll continue the arduous life of a sailor with his fellow sea-salts.

Yet, because everything Chris Elliott does is laced with an arch, fey quality, it's impossible to think of him actually "manning up" (and of course, the actor doesn't become any more physically formidable-looking at the film's end than he looked at the opening). In comedies, a serious story may be mocked with a lot of jokey situations but most comedies dont' undermine the protagonist's nature in itself. And arguably there's nothing intrinsically heroic about Nathaniel simply having killed a cuckolded husband, giant or not. Thus, since the script seems to constantly undermine both the protagonist and his wold so thoroughly, I consider it an irony in the combative mode.

Posted by Gene Phillips at 12:06 PM
Email ThisBlogThis!Share to TwitterShare to FacebookShare to Pinterest
Labels: combative ironies, the marvelous