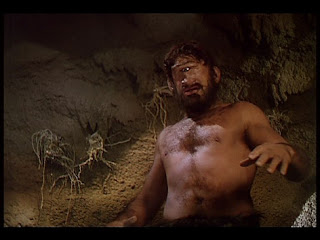 Producer Dino de Laurentis' ULYSSES was almost certainly an Italian response to the American vogue for films of epic proportions, which were in their turn a response to the competition said studios were getting from inexpensive television shows.

Despite flaws that are now very evident today-- awkward dubbing, budgetary limitations-- ULYSSES was a success with 1950s audiences, and arguably paved the way for a wave of Italian-made fantasy/adventure films that reached U.S. shores, starting with 1958's HERCULES.  Ironically, Ulysses, who might be said to have "started it all," didn't get a series of film spin-offs as such, though occasionally he showed up in such hero-team-up films as ULYSSES AGAINST THE SON OF HERCULES.  Very few English-language productions, save the 1997 telefilm THE ODYSSEY, have troubled to give the hero his original Greek name of Odysseus.

I didn't expect the enormously complex Homer epic to be faithfully represented in a mainstream theatrical film, and indeed the script very efficiently boils down the rambling narrative into a watchable story. Ulysses (Kirk Douglas) is first introduced to the viewer in a way roughly like his appearance in the epic-- that of being washed ashore on the island of the hospitable Phaeacians-- but, in order to keep the audience from being overwhelmed by the mythic narrative, Ulysses initially has amnesia. Thus the audience learns part of his story through Ulysses' recollection of it, and part from the family he's been unable to reach for the last ten years: his wife Penelope and his grown son Telemachus. As in the epic poem, the travails of these family-members provide narrative suspense, in that a small horde of importunate suitors have plopped themselves down in the king's house, claiming that the long-absent king must be dead and that Penelope must choose a new husband.

Ulysses' first memory deals with the conclusion of the Trojan War, whose victory is made possible by Ulysses' employment of the Trojan Horse. So that the movie-audience won't have to deal with all the involved transgressions that cause Ulysses' long exile in the poem, the movie substitutes just one initiating transgression: UIysses and his men, while sacking Troy, destroy the temple of Nepture (Poseidon in Greek). The effect of this action is questionable, since at no point does the movie-script show that the Greek/Roman gods are incontrovertibly real. Plainly the producers didn't want to deal with scenes of the Olympians watching from on high, like the ones in 1963's JASON AND THE ARGONAUTS.

The desire to exorcise the gods gives the story a rather schizophrenic attitude. Even though the gods don't appear, ULYSSES has to incorporate a host of marvelous presences-- or at least, the ones that the audience most expected to see. Ulysses naturally hears the song of the sirens, whose origins are not explained, and manages to vanquish the cannibalistic cyclops Polyphemus, who claims to be the son of Neptune and is clearly bigger than any ordinary human being. And in his confrontaiton with the "witch" Circe, she does not claim to be the kindred of the gods, as in the epic. But Circe mysteriously claims that if the hero will stay with her, she can give him a potion that will make him into one of the gods. He refuses-- like the later cinematic Jason, Ulysses values the limits of a mortal life and death-- so that the audience never quite knows whether or not Circe can deliver what she promises. The Circe-section, incidentally, also incorporates material from other sections of Homer. The sorceress in the epic makes it possible for Odysseus to consult spirits of the dead, while the one in the film actually calls them up herself, in an attempt to cajole the hero into joining with her. In an added twist, Ulysses' dead mother shows up to the spirit-party uninvited, and steers her errant son away from the sorceress and back to earthly love and duty.

It's likely that the film's producers had some mundane reason for casting Silvana Mangano in both the roles of faithful Penelope and the temptress Circe. For all we know today, perhaps Mangano simply wanted both roles. The psychological effect, though, is to assert a unity between the two diametrically opposed women-- a unity that does not exist between Ulysses and the suitor who proves his foremost rival, Antinous (Anthony Quinn). Some of the dialogue is very suggestive of the whole "woman is an eternal mystery" trope. It would be interesting to know if any of the story's six writers were aware of a non-Homeric continuation of Odysseus' adventures, in which the hero is killed by Telegonus, the grown son of his former lover Circe-- after which, in a rather convoluted Oedipal scheme, Telegonus marries Odysseus' widow Penelope while Telemachus, the hero's child by Penelope, marries Circe.

Mangano and Douglas are the only players given enough material to construct bravura scenes for their respective characters. By comparison, even the actors playing more important support-characters-- Quinn, Rosanna Podesta (given the very unrewarding role of Nausicaa)-- aren't much more than spear-carriers. The script tries to construct for a modern audience a palatable version of a roistering Greek hero, and though Douglas' Ulysses is never all that compelling, his moments of arrogance, skepticism and bloodthirstiness are certainly in tune with the Greek idea of the martial heroes.  The pace is overly slow at times, but the movie deserves plaudits for its suspenseful construction of the mariniers' ordeal in the Cyclops' cave, which comes off well despite the aforementioned budgetary restrictions.