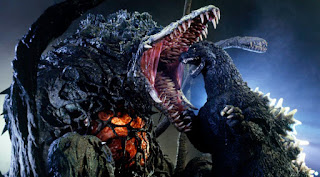 
GODZILLA VS. BIOLLANTE directly followed GODZILLA 1985, the first of the so-called "Heisei series" of the franchise. Despite some promising ideas, BIOLLANTE reminds me a lot of the still-image above. The film, like Biollante, tries to bite off more than it can chew.

I watched an English-language DVD that purported to be more complete than the theatrical release, but I still found myself getting lost on some of the movie's plot-points. According to the DVD's promotional materials, neither director Kazuki Omori nor most of his crew had worked on a Godzilla film before, and reputedly their attempt to prove themselves led to clashes with upper management. On occasion such conflicts can lead to a superior product, but I found Omori's characters flat and his exposition chimerical.

BIOLLANTE sports one strong idea that continued to resonate throughout later entries in the Heisei series. After Godzilla has been temporarily exiled within the depths of a slumbering volcano, various scientific firms-- both Japanese and foreign-- attempt to harvest skin-cells left behind by the radioactive behemoth, for use in bio-technology. This was an overt attempt to supplement the "nuclear fears" represented by the 1950s colossus with an additional concern: the fear of mankind's Frankensteinian attempts to experiment with living biological forms.

The result of one such experiment is another colossus, a giant plant-creature combining aspects of a giant plant and of Godzilla himself. To further complicate the plant-monster's history, the scientist has also managed to somehow infuse the soul of his dead daughter into the mix, although this doesn't have much direct impact upon the plotline. In large part, the presence of the human element is only inferred by the presence of a human psychic, Miki Saegusa, who appeared in all of the Heisei series from that point onward. While most of the characters lack the simple appeal of the better Showa films, Miki is imbued with a spiritual quality that makes her appealing even when the script wanders about.

Godzilla is drawn to the flowering form of Biollante because of their shared cellular structure, but for no clear reason, the plant-creature attacks Godzilla with its vine-arms and is destroyed by the Big G's atomic fire-breath. However, as in a great many of the Mothra films-- to which Biollante probably owes some concept-debt-- Biollante is reborn in another form. The plant-monster does not seem as overtly beneficial as Mothra, but by hook or crook Biollante does manage to repel Godzilla's attack on Japan for a time, before Biollante's next form transmigrates to outer space. Godzilla, rather than renewing his attack on Japan, retreats back to the depths of the sea.

While the discourse on the morals of biotechnology had potential, Omori's cardboard characters are incapable of infusing the dialogue with any passion or sense of consequence. The giant-monster battles are just fair, but this may be natural enough given the inexperience of the crew. Certainly later entries in the Heisei series showed some degree of improvement.

The film proved a box office disappointment, with the result that this remains Biollante's only outing.
Posted by Gene Phillips at 2:22 PM
Email ThisBlogThis!Share to TwitterShare to FacebookShare to Pinterest
Labels: combative dramas, the marvelous