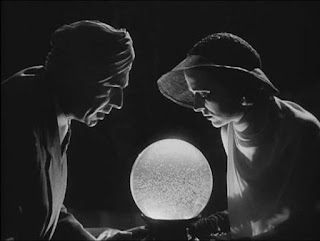 In addition to their other accomplishments, Bela Lugosi and Boris Karloff, Hollywood's "Kings of Horror," both crossed paths with master sleuth Charlie Chan, albeit about five years apart from one another. Not surprisingly, because both had played a number of "heavies," neither one turns out to be the main murderer whom Chan must detect by film's end.

I read Earl Derr Biggers' THE BLACK CAMEL years ago, but remember nothing much about it, so I can't say if the 1931 film is a serviceable adaptation, though both stories concern a female film-star being murdered in Chan's neck of the woods. This was a rare circumstance for the movie-Chan, who tended to hop around the globe in search of murder-suspects.

Neither the mystery nor its staging is particularly compelling, though Lugosi has a good scene with Warner Oland, as a phony psychic who can smell a cop from a mile away.  He also has one scene using a crystal ball to help a wealthy woman seek to contact a departed soul-- but even though Lugosi had scored with the public as Dracula a few months prior to CAMEL, even he can't invest the psychic or his modus operandi with any intimations of the uncanny. This is the first film in which I've found a "phantasmal figuration" of this specific type-- that of occult divination-- to fall entirely into the naturalistic domain, in that it's unlikely any audience-member identified with the hocus-pocus even for a moment.

For me the main interest of CAMEL is that the story, following the novel, saddles Chan with an incompetent junior officer of Asian descent-- anticipating the similar but far superior employment of the character of Charlie's son Lee Chan, who debuted in 1934's CHARLIE CHAN IN PARIS as essayed by Keye Luke. 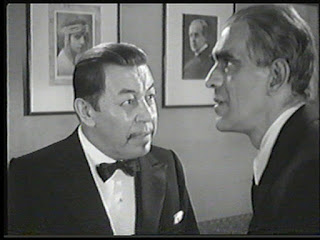 Lugosi may have been relegated to playing the sort of "red herring" he'd played in his early Hollywood years, but Karloff's character gets major exposure, for all that he too is not the story's main villain.

Gravelle (Karloff) is introduced in his room at an asylum, where he's been confined due to his total amnesia for the past 13 years. He sees a newspaper item about a famous opera diva and suddenly remembers who he is, impelling him to break out of the asylum and to begin haunting the opera, seeking revenge on those who sought to kill him and caused his memory-loss instead. Chan, who is a fan of the diva, is consulted on the case. Chan's bumbling son Lee comes along for the ride, though most of the picture's funny stuff comes from short-fused Irish cop Kelly (William Demarest), who is slow to appreciate Charlie's talents and calls him things like "Chop Suey."

The script strikes a deft balance between the backstage complications of the opera's production and the mysterioso appearances of the deranged Gravelle, who is himself a former opera-singer. Fittingly,
the opera chosen is a version of "Faust," giving Karloff the chance to dress up in the devilish costume of Mephisto. Despite the fact that the murder committed at the opera isn't of his doing, Karloff's cadaverous aura of menace proves more memorable than the film's final detection-scene.

That said, it's still Warner Oland's film, and in Chan's longest scene with Gravelle, Oland's skillful underplaying actually makes Karloff's "mad act" seem a trifle overdone. Chan also shines in finding a way to allow Gravelle the kindness of seeing his grown daughter again, even though the young woman is utterly unaware of being related to the operatic madman. Even the dimwit Kelly is redeemed to some extent, as he realizes that Chan is a superior detective and admits it-- surely a sociological moral that the filmmakers encouraged the audience as a whole to embrace.

Posted by Gene Phillips at 11:57 AM
Email ThisBlogThis!Share to TwitterShare to FacebookShare to Pinterest
Labels: perilous psychos (u), phantasmal figurations (n), the naturalistic, the uncanny