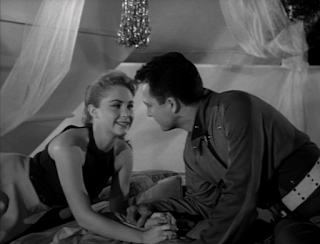 BEYOND THE TIME BARRIER is probably the best of Arthur B. Pierce's dozen-or-so scripts for low budget SF-films, and it's certainly an improvement over 1959's THE COSMIC MAN, which was little more than a retread of 1951's THE DAY THE EARTH STOOD STILL.  It's definitely not as good as the previous teaming of director Edgar Ulmer and leading-man Robert Clarke, THE MAN FROM PLANET X, a 1951 film which remains one of the best low-budget works of the period. BARRIER's visual shortcomings are more evident. For a film shot in ten days, the set-design is exemplary, but I suspect that shooting-schedule was a big reason that Ulmer steers clear of close-up shots of the actors. This is a bit of a shame, since even though the script is derivative, particularly of H,G. Wells' novel THE TIME MACHINE, the story carries more dramatic heft than another low-budget film that borrowed heavily from Wells: 1956's WORLD WITHOUT END.

Air Force pilot Major Allison (Clarke) departs his base in 1960, testing out an experimental jet, only to have the misfortune of going "beyond the time barrier." Allison ends up wandering around a post-apocalyptic landscape in 2024, until he's taken in by the denizens of a subterranean city, the Citadel.
The subterraneans bear less resemblance to Wells' Eloi than to the underworld denizens of WORLD WITHOUT END, in that the Citadel-people are also the last holdout of civilization. And in both films this last redoubt is threatened by mutants, brought on by the plague has decimated the previous civilization, and these creatures show considerable thematic resemblance to Wells' Morlocks.

However, whereas WWE depicts an apocalypse that can be fixed with good old American know-how, BARRIER is a little less sanguine about the benefits of doomsday. Allison is soon apprised that's he's crossed into another time-frame, but it's a future that has no future, at least not for mankind.

Pierce rings in two relatively novel changes in the usual post-nuclear scenario. One is that nuclear fallout has not appeared as the result of a war. The subterraneans' grandfatherly ruler informs Allison that at some point the nations of the world united in their effort to conquer space, and have even managed to send colonies to other worlds. However, the wages of sin are still death: the fallout created from early nuclear experiments becomes dispersed throughout Earth's atmosphere and ends up breeding the plague that infects almost everyone, except for a few humans known as "scapes" and the people who escaped to otherworldly colonies.

The second change is that the people in the Citadel are living on borrowed time, for most of them, except for the scapes, have been infected. The younger generation is largely both sterile and deaf-mute, although one unusual subterranean-- Trirene, the daughter of the Citadel-ruler-- may be capable of giving birth. Trirene has also formed a beneficial mutation: the talent to read minds, even though she remains mute, and implicitly deaf as well. However, the film's other mutants-- who are for obscure reasons being held prisoner within the Citadel-- are all deformed, shambling types, lusting to destroy their kindred rather than simply letting them die out.

Trirene immediately becomes Allison's champion against the more suspicious subterraneans, and he reciprocates her affections-- though it's soon made clear that Trirene may also be hoping to rejuvenate the human race by using the time-traveler as a breeding-stud. WORLD WITHOUT END seems positively giddy about this possibility, but Allison is a little more reticent. It doesn't help that the three "scapes"-- a Russian female pilot and two scientists with sinister Middle-European names-- inform Allison that he may be able to get back to his own time, and prevent the apocalypse.


Often I don't like the kind of time-travel tale that centers on preventing one domino from knocking down all the others, but BARRIER actually presents the scenario with a certain crisp efficiency, though all of the psuedo-Einsteinian science sounds like gobbledygook. Allison has to choose between making a pleasurable liaison with fetching Trirene, and going back to his own time to do his duty-- with the added complication that the sinister Europeans may have their own agenda. Clarke isn't very expressive as Allison, but co-star Darlene Tompkins sells the simple plot better than he does, giving Trirene a winsome characterization despite having only expression and gesture to convey that character.  I'm not giving away the farm to say that Allison's attempts to do his duty bring an early end to the doomed Citadel, but even though I'd seen the film before, I found myself wondering how successful he could be, bringing this doomsday tale to his own 1960s world. I'd completely forgotten the film's last-minute surprise, which makes it at least feasible that Allison might be able to rewrite the future.

Two other points: though Allison gets into a fight with one of his enemies at the climax, that fight lacks the intensity I associate with films in the combative mode. Also, although I regard the real "star" of WORLD WITHOUT END is the future-scape that's destined to be rehabilitated, in BARRIER I consider Allison the star, while the future-world he encounters is simply the environment with which he struggles.

Posted by Gene Phillips at 2:16 PM
Email ThisBlogThis!Share to TwitterShare to FacebookShare to Pinterest
Labels: the marvelous