I re-screened the first two of these backwoods-horror films and, for my own convenience, decided to copy my 2012 review of the third film into this post. 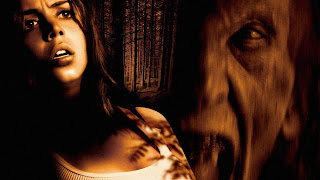 
As far as the horror-films of the 2000s are concerned, the original WRONG TURN may well be the decade's most well-known venture into the vein of "backwoods-horror," following in the vein of such films as TEXAS CHAINSAW MASSACRE, THE HILLS HAVE EYES, and-- well, BACKWOODS. But the original film is far from a classic in the vein of the first two, despite the producer-participation of revered makeup-expert Stan Winston.

Like many of the previous entries in this subgenre: the plot is simple: representatives of modern-day citified society take a "wrong turn" into hillbilly country, and find that the denizens of the forests and swamps are hostile to everything from the city. The opening scenes play to the familiar association of hillbillies and inbreeding, as director Rob Schmidt telegraphs his Big Reveal by showing the viewer a few newspaper-items discussing a West Virginia hill-clan that has been observed as showing freakish deformities, as well as exhibiting unusual strength and resistance to pain. In contrast to the second film in the series, inbreeding is the only reason given for the deformities, though Schmidt and his writer barely make use of the hill-folk's superior physical abilities.

Following the newspaper-teasers, and a sequence in which a couple of rock-climbers are knocked off by the forest-dwellers, the audience meets viewpoint character and medical student Chris. Chris is driving through West Virginia en route to an important job interview, and when he can't get where he's driving on the main highway, he makes a "wrong turn" onto a side road. He meets two rural types, a trucker and an old man at a slovenly gas station, and both of them evince veiled contempt for the impatient city-feller. Chris literally runs into the stalled car of five other city-youths, so that all six of them must walk through the forest to reach civilization. Two of the slothful youngsters can't be bothered to leave the road-- they want to stay behind and get high-- and predictably enough, they're the next targets of the deformed hill-folk,

After the strong build-up, though, in which the script puts the city-folk through their paces, WRONG TURN just becomes a routine "line-'em-up-and-knock-'em-off" slasher-opus. The methods by which the killbillies commit their murders are usually pretty mundane-- didn't anyone read them the rules of the Book of Slashers, that specifies that good slasher-villains hardly ever use guns? A few scenes provide decent thrills, as when "Final Guy" Chris and "Final Girl" Jessie try to elude one of the killers in the branches of a great tree, and both of the lead actors acquit themselves well.  But Schmidt avoids letting the audience see the deformations in great detail, and when they do appear, they certainly aren't makeup-designs in a league with those of Stan Winston. 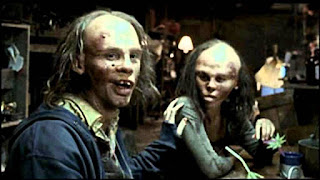 WRONG TURN 2, though, provides the rare example of the sequel that outclasses the original. To be sure, director Joe Lynch and the sequel's two scriptwriters raise the stakes in part by swiping from Tobe Hooper's TEXAS CHAINSAW MASSACRE-- but theirs is a good swipe, in that it melds new elements with the old.

Whereas the stranded city-folk of the first film were negligible as characters, TURN 2 paints with a broader palette. A wide variety of would-be celebrities come to the West Virginia forest to shoot a reality-show, in which all of them are competing for mucho dinero. True, all of them are types-- the Cowardly Goofus, the Lesbian Marine, the Ex-Jock-- but the script gives them all their little character moments, rather than simply lining them up for slaughter. TURN 2 is surely not the first time the participants of a "reality show" were forced to meet a much more unpredictable form of "reality," but the film gets points for casting AMERICAN IDOL celebrity Kimberly Caldwell as the first victim of the killbillies-- and for giving her one of the film's goriest deaths, being split down the middle by an axe.

Where most sequels are happy to churn out retreads of the same scenes that made the original story popular, Lynch and Co. seem eager to one-up their predecessors. The makeup of the murderous mutants is front-and-center this time, but Lynch again follows Hooper's example by infusing his monsters with touches of humanity. In particular Lynch outdoes Schmidt in emphasizing the gabbling language of the hill-folk, and by revealing that the hillbillies' mutations aren't due entirely due to incest-- though one such act is openly portrayed-- but also by careless chemical dumping by a now-defunct paper mill. Fans of CHAINSAW will remember that Hooper's degraded family were the victims of economic marginalization, and TURN 2 takes a leaf from the same book, implying at the end that the mutations will continue due to the ongoing pollution of the once pristine forest-waters.

TURN 2 is no great classic, even of this limited subgenre. But in terms of strong gore-scenes and tormented teens, it far eclipses many of the "retro-slashers" that came to theaters in the 2000s. 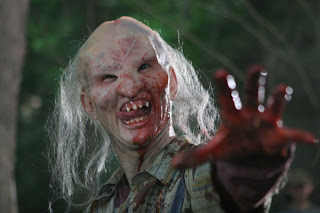 The best-part of this second sequel to 2003's hick-horror flick WRONG TURN comes at the beginning.  Four teens, canoeing on whitewater in the hills, beach their canoes and make camp.  One guy and girl leave to collect firewood and/or give the other guy and girl privacy to have sex.  Just as the half-nude girl is about to commence sex with her boyfriend, she asks if the guy thinks she's a slut.  His response isn't the joke: the joke is that when she's first to be killed by the freakish hillbilly Three-Finger, the writer has invoked once again the popular "slut dies first in these movies" trope.

In the same scene, the boyfriend-- also killed a few moments later-- references DELIVERANCE with a remark about a "banjo-playing hillbilly."  Then the other guy is killed by the horrible hill-dweller, though the "good girl" Alex escapes.

As often happens when it's evident that there's no place for a sequel to go with the original elements, filmmakers will try cross-breeding with elements of other genres.  Thus Jason of the FRIDAY THE 13TH films encounters a CARRIE-like girl in one of his outings.  This time, the WRONG TURN series gets crossbred (rather fitting metaphor in this case) with a prison-break story.  In brief, the next victims Three-Finger waylays is a transport-van full of convicts.  The convicts manage to get hold of the guards' guns, kill one guard and force the other one, who knows the backwoods country, to lead them to safety.  On top of all that the convicts frequently quarrel amongst themselves.  When Alex stumbles across the group seeking refuge, she finds herself thinking Three-Finger wasn't so bad-- at least until the "mutant freak," as the film calls him, starts picking everyone off one by one, largely with the use of arrows and clever traps.

The change from teen-victims to hardened criminals doesn't do anything for the level of characterization: the victims remain just as one-dimensional as in the other films.  I'm not a huge fan of the other two entries but they did show a little more imagination in terms of portraying the monstrous villain and his family; in this one Three-Finger seems to be alone except for a son who's quickly killed by the cons-- a leftover from the last entry, perhaps?  But the filmmakers do nothing special with the main appeal of the hick-horror film: the utter strangeness of the backwoods-culture.  The most I can say is that purely in kinetic terms, the film is better directed than two previous films by Declan O'Brien, the execrable SAVAGE PLANET (2007) and MONSTER ARK (2008).

Posted by Gene Phillips at 2:05 PM
Email ThisBlogThis!Share to TwitterShare to FacebookShare to Pinterest
Labels: diabolical devices (u), freakish flesh (u), superlative skills (u), the uncanny, weird families and societies (u)