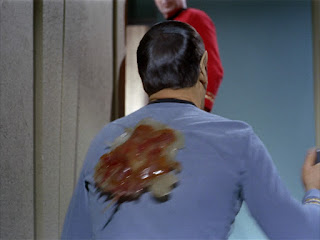 
"Operation Annihilate" can't help but come up short, premiering after the critically acclaimed "City on the Edge of Forever." It's a decent enough "thriller-type" episode, though, and it does recapitulate tropes that appear throughout the series' run: the fear of contagion and the fear of crowd-madness.

The Enterprise-crew investigates a wave of madness that has appeared on several Federation planets. An accidental comic moment is supplied when Kirk and Spock discourse about how they can be sure of a continuous wave: because there's a "straight line" between all the affected planets. I don't demand a lot of attention to real-world science in fictional stories, but it's quite funny to think that anyone could imagine a series of planets remaining in such static arrangements.

Further, the plague is communicated by entities that can possess human beings and use them to convey the entities, via star-ships, to their next victims. The whole business of planetary alignment seems to suggest more the idea of the plague-creatures crossing the spatial gulfs under their own power. The contrasting idea that the entities actually commandeer star-ships makes nonsense of the whole alignment idea. (Can't star-ships just travel anywhere they please?)

The alignment idea mostly suffices to inspire Kirk and company to investigate a planet called Deneva, where Kirk's brother Sam lives with his wife and son. Sure enough, once a landing-party descends, Kirk and his cohorts are attacked by the irrational locals. After stunning the attackers, Kirk's party seeks out Sam's domicile. Sam Kirk has already died of the plague, while his son is comatose and his wife Aurelan seems delusional. Following these discoveries, the crewpersons also see the plague-creatures for the first time. Spock later describes them as looking like brain-cells, though the actual appliances might remind some viewers more of oversized ameobae. Spock is infected by one of the creatures, and, once again in the TREK series, a contaminated crew-member is taken aboard the ship, long before the crew can possibly know that he's non-communicable.

Spock describes what others have experienced: that a new creature gestates inside each victim, and that the creature inflicts intense pain to make the affected follow instructions. The script seems to suggest that the plague-cells share some mass intelligence, and that they may come from some universe where scientific laws are different (one of Roddenberry's few brushes with Lovecraftian tropes). Yet it's never clear as to what the creatures want. Does their possession of human beings serve some propagation-purpose, as it would with, say, viruses?

The dramatic subplot in which Kirk seeks to save his late brother's wife and son never congeals: Aurelan dies halfway through the story, and the boy never becomes conscious, though it's implied that he's saved when Spock finds the clue that will destroy the creatures. The episode's only saving grace is that the situation, ill-defined though it is, gives the Spock character the chance to show his indomitable Vulcan courage to best effect. There's also a subplot in which Kirk debates the possibility of destroying Deneva to prevent the spreading of the plague, which seems ludicrous if it's true that the plague-things need ships in which to move about. If the latter is the case-- why would it not be possible to simply quarantine the planet?

Posted by Gene Phillips at 3:15 PM
Email ThisBlogThis!Share to TwitterShare to FacebookShare to Pinterest
Labels: combative dramas, the marvelous