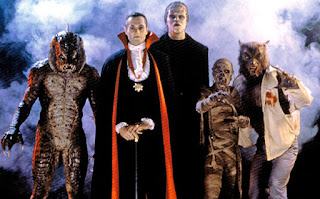 
Though THE MONSTER SQUAD was not overly successful in its initial release, the film-- directed by Fred Dekker and co-scripted by Dekker and Shane Black-- has become a cult item over the years. It's not a particular deep film, but it offers the first major "rally" of traditional American monsters since the venerable ABBOTT AND COSTELLO MEET FRANKENSTEIN.

Like the 1948 film, this one also offers the psychological thrill of the heroes getting to be "the Boys Who Cried Wolfman;" of knowing that there really are monsters and that the community at large is too dim to pick up on it. To be sure, Lou Costello's Wilbur is merely a full-grown man who acts childishly at times, while the four members of the Monster Squad are literal 12-year-old boys. I don't watch to prate too much about the typical Freudian "latency fantasies" to which kids in that age-range *may* be prone. Nevertheless, the script strongly hints at a correlation between the ages of the four main protagonists-- Sean, Patrick, Eugene, and Horace (stuck with the name "Fat Kid" for most of the picture)-- and their unrelenting passion for movie monsters. The latency interpretation is somewhat supported by the fact that Rudy, a sixteen-year-old loosely tied to the club, initially scorns the group's monster-love, just as most adults view the boys' club as a passing phase. Sean's five-year-old sister Phoebe aspires to be a member of the group, but the fact that the boys exclude her argues that the club really is for guys of a certain age. That said, if the boys have any Freudian fantasies, they're barely acknowledged by the script, except through the indirect medium of Patrick's teenaged sister, whose dubious status as a virgin becomes a humorous plot-point late in the film.

Of course, the monsters here aren't psychological fantasies, but real creatures of the dark, out to dominate the world. As in the A&C film, Count Dracula is the undisputed leader, probably because he's the most overtly Satanic figure, but in that film Dracula only aspires to use one monster as his puppet, while the original Wolf Man seeks to oppose the vampire's evil. In SQUAD the vampire-lord commands four monstrous stooges:  the Wolfman, the Gill-Man, the Mummy, and the Frankenstein Monster. However, the first three are not able to resist Dracula's power-- although the werewolf' in his normal identity makes a stab at doing so-- and only the Monster is able to win free. Dekker's Frankenstein is more like the pitiable figure of the two James Whale films than most of the creature's later incarnations, and he plays a vital role in the vampire's ultimate defeat. It's regrettable that their climactic conflict is not a major battle, for actors Duncan Regehr and Tom Noonan give their roles an aura of great formidability. By comparison, the Mummy and the Gill-Man suffer rather humiliating defeats at the hands of the preteens, though at least the Wolf Man gets the dignity of being killed with the iconic silver bullet, by none other than latter-day conversion Rudy. But all of the monsters are visually imposing, and even little Phoebe gets to play a role in their defeat.

The "McGuffin" over which the two groups struggle is a mystic amulet, which, rather confusingly, has the potential to either (1) give Dracula and his minions ultimate power over mankind, or (2) exile all of the monsters into a formless limbo. Given that I subjected the kids to Freudian dissection, I might as well subject the amulet to the Jungian magnifying glass. Dekker and Black don't explain the magical bauble, but IMO it represents the power of the imagination itself, which possesses, among other things, the power to bring fictional monsters to life. It's also a power that the kids, despite their love of creepy things, must foreswear by the film's end, as they cast all of the creatures back into the unreality that spawned them. In the film's most poignant moment, even the Frankenstein Monster, despite having aided the Squad, must return to the void (or collective unconscious), unable to fit into the real world from which he sprung.

That said, the film ends with a vindication of fantasy, rather than an injunction to "put away childish things." There are apparently no more monsters on Earth, but nonetheless the movie's last lines consist of Sean telling a flummoxed army officer that he and his friends are "the Monster Squad." Possibly Dekker just wanted to suggest the possibility of a sequel to investors. Yet Dekker's conclusion also celebrates the fantasies of kid-hood-- which certainly includes the wish-dream of being able to defeat evil, even when you haven't yet got your full growth, and even when all the older folks can't see that you're in the right.
Posted by Gene Phillips at 3:02 PM
Email ThisBlogThis!Share to TwitterShare to FacebookShare to Pinterest
Labels: the marvelous