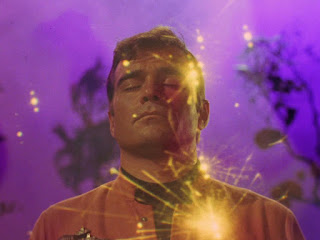 
Though romance appeared in other episodes, Gene Coon's "Metamorphosis" is the show's first true love story. To be sure, it seems to have been conceived to fit into Gene Roddenberry's somewhat masculinist view of the world. The opening scenes feature the show's first depiction of a woman in a position of Federation authority: diplomat Nancy Hedford. Though McCoy explains to Kirk that Hedford's shrewishness may stem from her having contracted a rare disease, the character's depiction, both in the opening scenes and in later exposition, fits the trope of the "loveless career woman."

That said, these sociopolitical aspects are happily kept to a minimum, in contrast to later episodes like "Turnabout Intruder." Kirk, McCoy, Spock and Hedford are en route to the Enterprise when their craft is forced down onto a small planetoid. The waylaid foursome encounter a single male human on the otherwise empty planet. They eventually learn that he is the legendary scientist Zephraim Cochrane, developer of the warp drive, supposedly dead for the past hundred-odd years. Cochrane crashed on the planetoid but was restored to youth and made immortal by a mysterious energy-being, the Companion. This entity also brought Kirk and company to the planet to keep Cochrane company. Kirk has a ticking clock: he needs to get Hedford back to civilization not only to treat her illness, but because she's important to diplomatic peace talks. In the course of trying to escape the Companion's reach, Kirk and Krew learn that the energy-creature is fundamentally female, and in love with Cochrane. Because the Companion will not release Cochrane and his prospective new social group, Hedford's disease catches up with her.

Kirk, in trying to convince the alien that she can't really love Cochrane in her immaterial form, unwittingly allows career woman Hedford to undergo a "metamorphosis." Before Hedford dies the alien fuses with her, giving her body new life but essentially taking over her personality. This removes the Companion as a threat, at which point the main conflict becomes the question of whether Cochrane can come to terms with his emotions.

The episode's high point appears when Cochrane-- who has frequently "merged" with the energy-being in order to communicate-- finds out that she's female by nature. Somehow, this makes him conceive of their unions as sexual in nature, and he reacts as if he were the victim of an unwitting seduction-- or many seductions, over the course of numerous years. The denouement, in which Cochrane and the reborn Companion, pledge to live out their now mortal lives together on the planetoid, strongly resembles the conclusion of "The Menagerie." Apparently Eden is OK when it's made available only to those at the end of their lives, or otherwise outside the bounds of normal society. 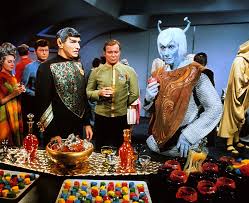 "Journey to Babel," scripted by D.C. Fontana, is an excellent "white-knuckle" thriller, as the Enterprise must transport a dozen or so diplomats to their next peace conference. In addition to strife between the less than diplomatic politicians, Kirk must also contend with an assassin in their midst, and an unidentified ship that dogs the Enterprise's tracks. On top of that, two members of the diplomatic party are the Vulcan Sarek and his human wife Amanda, who are the parents of Spock. Father and son have not spoken in eighteen years because Spock chose to lend his scientific talents to Starfleet rather than the Vulcan Science Academy. Though Sarek never admits the ultimate cause of their disaffiliation, it's clear that he resents Spock choosing to ally himself to his mother's culture, rather than that of Vulcan.

This is dominantly a Spock episode, concerned with depicting Spock's strained relationship to his parents, as well as putting forth little gems like McCoy finding out that little Spock once owned a live "teddy beat," Yet Kirk gets his fair share of strong moments, riding herd on the diplomats and suffering a serious wound at the hands of the assassin. Fontana throws even complication after complication-- Sarek suddenly develops a serious illness and needs a blood transfusion from Spock, just when the science officer cannot surrender command-- yet none of the complications seem excessive. The makeup and clothing-design for the alien actors ably sustains the illusion of numerous conferring aliens, even though all we actually see are Vulcans, Tellarites and Andorians.

One interesting psychological angle is whether or not Spock's initial refusal to give the blood transfusion may be rooted in emotional resentment rather than the logic of duty, despite Spock's eloquent defense of Starfleet priorities. Certainly his mother's appeal to Spock's sentimental side is an appeal to make him choose the "law of the father" over "the law of Starfleet." Curiously it's Kirk who puts the Freudian angle into its most concrete terms, claiming that he must, despite his wound, get Spock to surrender command to keep Spock from committing "patricide."

Posted by Gene Phillips at 3:59 PM
Email ThisBlogThis!Share to TwitterShare to FacebookShare to Pinterest
Labels: combative dramas, the marvelous