If "Who Mourns for Adonais" was partly influenced by "Squire of Gothos," then "Catspaw," Robert Bloch's second TREK-script, is baldly derivative of both of the. Instead of one alien who assumes the image of a bygone figure from Earth's past, here we have two: a pudgy male named Korob (cherub?) and a witchy female named Sylvia.

For the first time, there's no advance explanation of why the Enterprise chose to beam a crew down to the surface of the aliens' planet, one Pyris VI, not even the standard "anomalous readings." One member of the landing-party, a redshirt named Jackson, asks to beam up and when he gets there, he proves to be a dead man through which the aliens speak, warning the space-sailors to keep away. Of course, if the aliens really wanted the crew to stay away, they would have returned the whole landing-party: by keeping Scott and Sulu captive, they invite Kirk and his usual wingmen to descend in search of them. The aliens' motivation is choppy at best: in one scene Korob claims that he warned the Enterprise away, though none of the crewmen mention their having been warned. Still later, both aliens-- who have assumed the appearances of warlock and witch respectively (while Sylvia can also transform into a black cat)-- claim that they wanted the spacemen to come, in order to test their resolve. They admit that they are not natives of Pyris VII, having used a "transmuter" to get there, but the closest we get to an explanation of their purpose is that Sylvia tells Kirk that her people lack "sensation" in their domain, and that they've come to experience the full gamut of sensations in Kirk's part of the universe.

She says this, by the way, while trying to seduce Kirk to help her in some vague way, but Kirk only plays his Don Juan act for a few minutes before turning down her presumably-Faustian overtures. Bloch may have intended Sylvia to be a sort of Magna Mater type-- and she does come closer to this than any previous female character on the show, though the actress isn't quite up to portraying such a figure. Late in the story it's revealed that she has more authority than Korob, even though he seems to be in control at the outset. Korob, for no particular reason, changes sides toward the conclusion and helps the crew save themselves and their zombified friends from Sylvia's wrath. However, he dies with her and the crewmen go on their way.

Whereas the "Adonais" script does a fair job at depicting the Glory of Greece in the form of Apollo, Bloch doesn't even come close to representing "things that go bump in the night" in the forms of Korob and Sylvia. Supposedly this was conceived as a "Halloween episode"-- even the custom of "trick or treat" is referenced-- but the dominant theme is that of rejecting the superstitious beliefs of man's forbears in favor of the Federation's technology. And of course, the fact that the aliens themselves only use a "science-that-looks-like-magic" does nothing to enhance them. The most interesting facet of the erratic script is when Spock theorizes that the aliens may have taken on these forms by drawing upon the "racial unconscious" of humankind, which sounds like a tacit endorsement of Jung's collective unconscious-- at least, within the sphere of this episode. 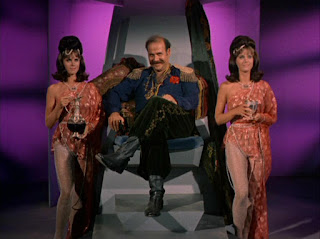 "I, Mudd"-- whose title may be a spoof on Robert Graves' 1934 novel I, CLAUDIUS-- is much more successful than either "Catspaw" or the comic villain's previous appearance in "Mudd's Women." Mudd himself is something of a "catspaw" himself. He crashes upon an uncharted planet while fleeing the forces of law and order, and finds that this world was an outpost created by an extinct race and now inhabited only by a coterie of androids. The androids serve Mudd as their emperor but won't let him leave their world, because his presence gives them something to do. Desperate to give the robots someone else to serve, Mudd talks them into sending one of their number, Norman, to infiltrate a Federation starship and bring it to Mudd's world, so that the crew can take Mudd's place as the imprisoned "masters." By dumb luck Mudd gets the Enterprise and his old nemesis Kirk.

Since this episode is a perennial favorite, I won't rehash the many comic routines to which the spacemen resort to get clear of the androids. I'll note that this is not only one of the second season's episodes to emphasize the perils of man's technology dominating him, it also is something of a "plague" story, as Kirk and Crew must prevent the robots from spreading to other parts of the galaxy. Perhaps one of the funniest concetions is that Mudd tells Kirk that he fled to the stars to escape his harpy of a wife-- appropriately named "Stella" (star)-- which is certainly a neat inversion of the old trope about men conquering new terrains to please their women. I also won't rehash how Stella fits into Mudd's punishment after Kirk has defeated the androids, but it remains one of the show's most effective comic endings.
Posted by Gene Phillips at 3:10 PM
Email ThisBlogThis!Share to TwitterShare to FacebookShare to Pinterest
Labels: combative dramas, the marvelous