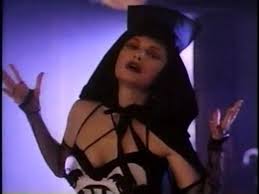 I hadn't watched ROCKULA in years, and my memories of it were not good, but I gave it another look anyway. The film was directed and co-written by Luca Bercovici, who had his greatest success with 1984's GHOULIES and its three sequels. None of the GHOULIES films are especially good, but they're pure poetry next to ROCKULA.

I have to assume that Bercovici's took his main inspiration from comic horror flicks like YOUNG FRANKENSTEIN, but ROCKULA doesn't understand anything about the vampire-story subgenre. In the setup scenes, we learn that Ralph, a vampire who looks like a twenty-something mortal, is actually over 400 years old, as is his only living relative, his mother Phoebe, with whom he still lives. Neither of them seem to suffer any of the needs or vulnerabilities of vampires, although they do display fangs on the odd occasion.

It's not Ralph's fault he still lives with his mom: he seems to be really, really unlucky at love. Centuries ago he met his one true love, Mona, but before they could be joined, Mona was killed by a pirate with a rhinestone peg-leg. Since that first evil encounter, Mona keeps getting reincarnated in a new body every 22 years. But apparently the Rhinestone Pirate does as well, since he appears at each reincarnation to kill Mona off, before Ralph can know the joy of sex.

It's modern times, and Ralph doesn't even want to stir out of the house, for fear of meeting Mona again and watching her die. Eventually, after talking to his own reflection for a while (don't ask), he ventures forth, and runs into Mona-- or rather, she runs him down with her car when he steps into the street. Again Ralph tries to avoid the cursed girl, but when he finds out that she's a club singer, he finds himself moved to form his own band, of which he is the lead singer-- Rockula!

However, though the Pirate doesn't immediately appear, Ralph has a rival in Mona's ex-boyfriend Stanley, a huckster who sells expensive funeral plots. Stanley observes his ex spending time with Ralph and consults a psychic, the suggestively named "Madame Ben Wa." The psychic tells Stanley that the only way he can defeat Ralph is to dress up as a pirate, compete with rhinestone pegleg. Stanley doesn't plan to kill Mona, though, only to deep-freeze her until she loves him again.

The comedy scenes are lame despite the efforts of the actors, but the lame jokes provide some relief from the even worse music. At times ROCKULA looks like a long music video punctuated by some narrative digressions, and I suspect that the movie was designed with the notion of pushing the music, credited to none other than Hilary Bercovici, brother of Luca.

My SPOILERS is for the film's only interesting psychological motif. It turns out that "Madame Ben Wa" is none other than Ralph's mom Phoebe, who has never wanted her little boy to marry and thus leave her. Implicitly-- though the script glosses over this point-- she's been the sole source of the "pirate curse" for centuries, suborning some schmuck like Stanley to kill off Mona at the appropriate time, so that she could continue living with her precious boy. For what it's worth, Phoebe-- whose name connotes "the moon," even as one derivation of "Mona" does-- isn't planning to seduce her son a la MANCHURIAN CANDIDATE; she just wants him to keep him in her eternal orbit. Yet Bercovici doesn't really play fair with the Big Reveal, since Phoebe, despite acting weird at times, doesn't really act in a way that might throw suspicion on her.

All that said, though, I must admit if there's a little goofy symbolism in the psychic's name. Is Ralph, in a symbolic sense at least, an object she keeps inside her, for her satisfaction? But this bad pun is about the only time the film aspires to the Mel Brooks level of smutty jokes.

ADDENDA: Although the film does end up with a comic battle between Ralph and Stanley, neither character shows a high level of dynamicity, so this is a subcombative comedy, not unlike the later CANNIBAL WOMEN IN THE AVOCADO JUNGLE OF DEATH.

Posted by Gene Phillips at 11:59 AM
Email ThisBlogThis!Share to TwitterShare to FacebookShare to Pinterest
Labels: the marvelous