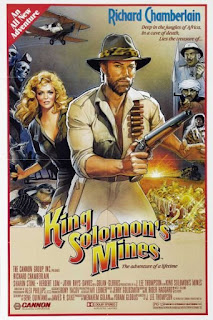 
I reviewed the second film in this series here, but though the second outing was released two years after KING, these 1980s versions of classic white hunter-hero Allan Quatermain were filmed back-to-back. The first film is, like its sequel, "dumb fun" at best, and only erratically borrows plot-threads from the 1885 novel. The novel begins with Quatermain being hired to venture into an unexplored part of Africa to find an Englishman's missing relative. In this film, released by the cheese-kings Golan and Globus, Quatermain is hired by a sexy young blonde (Sharon Stone), whose father, like the missing man in the novel, was seeking the fabled King Solomon's Mines.

The script for this flick has no sense of the mythic resonance of the Biblical mines, much less the culture-clash of colonial England venturing into "darkest Africa." KING's entire raison d'etre is to copy the comical scenes from 1981's RAIDERS OF THE LOST ARK, ignoring all the other elements that made that film a success. Most of KING's slapstick-toned antics don't work particularly well, as director J. Lee Thompson-- never a strong hand with comedy, even in his early years-- overplays most of the scenes, virtually telling his audience, "Laugh here!"

Only one action-comedy scene works moderately well. Quatermain and Stone's character Jesse are captured by a cannibal tribe and thrown into a gigantic metal cooking-pot, sort of a brobdingnagian version of the sort of cookware seen in dozens of cartoons about white hunters getting stewed-- and not in a good way. The heroes' escape isn't the least bit believable, but it's the only scene in which the absurdity works on its own terms.

One odd scene doesn't rely on goony slapstick. While foraging through the jungle Quatermain and Jesse are given succor by a curious tribe of natives who no longer live on the earth, but inhabit the latticework-branches of the trees, There's an explanatory line about how these natives abandoned the earth to escape the evil of mankind or something like that. I seem to remember reading somewhere that this fantasy-element may have been taken from another Haggard book, and that may be the reason that it's the only scene that carries a little of that author's poetical charm. There's no fantasy-explanation for how the natives can hang from the branches, more or less in Spider-Man fashion, so it may be the natives' uncanny agility shares some kinship with some similar abilities demonstrated in the kung fu film FIVE DEADLY VENOMS. That said, the presence of a giant spider edges the film into the domain of the marvelous.

Stone probably gets the worst part in the movie, as the script writes her "Karen Allen lite" character as a blithering idiot, though Chamberlain doesn't get much better treatment, nor do Herbert Lom and John Rhys-David. Two Black African characters from the novel aren't implicated in the silly hijinks: Umbopa (Ken Gampu), who joins the expedition to uncharted Africa to reclaim his lost throne, and Gagool (June Bethelezi), the evil old witch-woman who tyrannizes over Umbopa's tribe. The latter makes a very good evil old woman, but is not nearly as central to the film as she is in the novel. 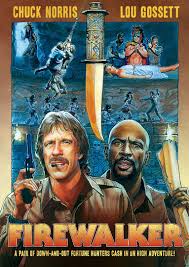 FIREWALKER, also produced by Golan-and-Globus and directed by Thompson, takes the same near-comical approach to RAIDERS material, but if anything it's even lamer than KING. It concerns two Americans (Chuck Norris, Louis Gossett Jr.), stuck in Central America and looking for their next big break. Along comes a comely blonde girl, Patricia (Melody Anderson), who informs them of a fabulous Indian treasure, though the script doesn't seem clear on whether the treasure was left behind by the Aztecs, the Mayans, or the Apaches. As the trio set out on their trek, they are menaced by Coyote, a local shaman, also the evil guardian of the treasure. He's also apparently the "firewalker" of the title, though this is barely justified in the careless script.

I've seen other online reviews go into great depth charting the embarrassing inconsistencies of the film, so I won't touch on them here, except for one. After Norris and Co have consulted with a "good shaman" to get help on their quest, they take their leave, and the shaman says something like, "I don't know how Tonto does it." It's not out of line for a Native American to pass arch comments on people looking to plunder Indian artifacts. However, at least Tonto's tribal origins were consistent,while this film's script can't even keep its Native American mythology straight.

Again the humor is largely overplayed by Thompson and largely unfunny, but there's some novelty in seeing Chuck Norris, the Great Stone Face, trying to play things for laughs. He doesn't do that badly, even given the lame lines he has to read, but his relative success might be attributable to a good working chemistry with Louis Gossett, an actor noted for his ability to imbue even the worst characters with total conviction.
Posted by Gene Phillips at 1:43 PM
Email ThisBlogThis!Share to TwitterShare to FacebookShare to Pinterest
Labels: combative adventures, the marvelous