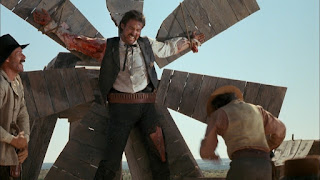 As the still above may indicate, GHOST TOWN owes a conceptual debt to 1973's HIGH PLAINS DRIFTER.

Back in Old Western days, a sheriff is murdered by a ruthless gang, led by a sadistic outlaw named Devlin (Jimmie F. Skaggs), and the rest of the town lets it happen. The sheriff curses the entire town, and this apparently results in the ghosts of the outlaws and the residents remaining tied to the town for the next hundred years, long after its buildings have fallen into disuse.

Then a modern-day woman named Kate is kidnapped by one of the ghosts, and modern-day sheriff Langely goes looking for her in the local "ghost town." Langley has a memorable encounter with an amimated corpse, that of the dead sheriff, who charges him with a mission of vengeance. Once Langley can wrap his head around the notion of fighting undead ghosts, he and Devlin have a series of violent encounters that culminate in a good old-fashioned showdown.

This Charles Band production is atypical in that there are no midget-sized horrors like his PUPPET MASTER and DEMONIC TOYS flicks: the outlaws, though pretty one-note, are given good grotesque makeup, and Jimmie Skaggs shines as the principal villain. Directors Richard Governor and Mac Ahlberg maintain a nice blend of lively battles and horrific scenes, though the script doesn't do much with the element of the guilty townspeople, condemned to live with the outlaws who terrorized them.

If only because of the showdown between Langley and Devlin, this is a combative film. I categorize it as a "drama" rather than an "adventure" because I consider Langley's goodguy character is not as central to the story of the vicious Devlin, and so the story is mostly about the attempt to banish a seemingly invulnerable "demon."

Posted by Gene Phillips at 3:05 PM
Email ThisBlogThis!Share to TwitterShare to FacebookShare to Pinterest
Labels: combative dramas, the marvelous