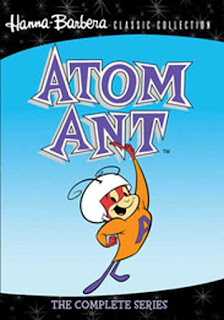 
I had no expectations of revisiting a beloved icon of my youth when I decided to screen the 26 episodes of Hanna-Barbera's ATOM ANT show, because I remember thinking it was pretty crappy even when I watched it as a kid.

The football-helmeted spawn of the formicidae family premiered as one sixth of an hour-long cartoon-block. THE ATOM ANT'SECRET SQUIRREL SHOW, although as its producers probably expected, the hour was eventually split into half-hour formats, with the two leads being features of their own half-hour shows, each with two unbilled co-features.All six cartoons were extremely repetitious kid-humor, and were closer in mold to the majority of Hanna-Barbera's TV-cartoon work-- RUFF 'N' REDDY, HUCKLEBERRY HOUND-- than they resembled the groundbreaking JONNY QUEST of the previous year.

The DVD collection includes all 26 shows of ATOM ANT in his half-hour format, wherein his co-features were the tedious PRECIOUS PUPP, which focused on the slapstick antics of a mischievous dog, and the marginally better HILLBILLY BEARS, about a family of four bears getting into slapsticky situations in the backwoods territory. Both of these features-- which I only skimmed for the purpose of this review-- used very uninspired jokes, and the only attraction of the BEARS was that the doofus hillbilly-father constantly mumbled his dialogue. This gave bored young viewers the challenge of trying to understand what Pa Bear was saying while they waited for the next routine hit-on-the-head schtick.

ATOM ANT seems to be Hanna-Barbera's first featured superhero character, but his stories also focused on nothing more than crude slapstick setups and assorted bad puns. It isn't impossible to do superheroes who are dominantly humorous, and in fact Hanna-Barbera did considerably better one year later with a spoofy group of superheroes called The Impossibles. Again, lots of dopey puns and slapstick-- but the scripters for THE IMPOSSIBLES had actually paid a little attention to the structural elements of the superhero genre in order to spoof it. Thus the scripts pitted the three Impossibles against silly but still imaginative villains with names like "the Diabolical Dauber" and "Smogula." Additionally, the visuals were more impressive than anything in ATOM ANT, even though both shows featured the same type of extremely limited animation.

With ATOM ANT, there's no sense that the cartoon-makers are doing anything beyond putting in a day's work. It doesn't really matter that the super-strong ant has no origin-- the Impossibles didn't have one, either-- but it matters that there's nothing intesresting about the world he's in. Most of his villains are stock mad scientists, except for the one insect who could give Atom a decent fight: his "opposite number" Ferocious Flea. Here's an indicator of how little the scripters bothered with thinking through this concept: one of the mad scientists breeds a super-termite, able to chew through anything. And the name the evildoer gives to his creation is-- "Godzilla." Yes, in those days you could get away with using the name "Godzilla" without getting a nasty call from the lawyers at Toho Studios, but it's still a pretty brain-dead name for a super-termite.

For that matter, Atom Ant is a bore as a character. In "Super Blooper," the ant is seen enjoying a fake superhero TV show, even though he himself is a real superhero. In "Dragon Master," the hero is transported back to Arthurian times, and he's only mildly concerned that he's just been separated from everything in his old life. (He doesn't even do anything to get back: that feat is accomplished through a blunder by one of the villains.) I don't imagine that even as a kid I expected much in the way of consistent characterization in a cartoon, but I know I liked characters who had personality. Even Mighty Mouse, from whom Atom Ant is probably loosely derived, had some sort of consistent outlook. The most interesting thing about the show is probably that H-B took two elements seen here-- the wheeze-laugh of Precious Pupp, and the name of a group of motocycle-villains, "the Anthill Mob"-- and re-used these elements to much better effect in 1968's WACKY RACES.

In closing I'll note that just as H-B recycled most of its standard tropes in this show-- hell, they even have Atom Ant help a mouse against a cat!-- they also use ethnic jokes that are objectionable today, and not just because they're badly done (though they are). Atom Ant rings in with one typically depicted "ah so" Japanese character and assorted dopey "redskins," while Precious Pupp manages to take on one little Indian and Pa Bear has an improbable encounter with yet another offspring of Mister Moto.

ADDENDA: On further thought I decided that there really wasn't all that much difference between the actual characters of Atom Ant and the Impossibles trio, in that all three were stereotypical depictions of the "painfully earnest good guy." The Impossibles' only advantage was really that they were occasionally seen in jeopardy, like Multiman constantly worrying about getting killed when the menace du jour plowed through his presumably lifeless carbon copies of himself.

Posted by Gene Phillips at 4:06 PM
Email ThisBlogThis!Share to TwitterShare to FacebookShare to Pinterest
Labels: combative comedies, the marvelous