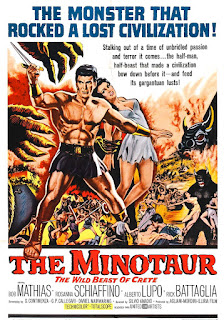 THE MINOTAUR, while far from the definitive cinematic treatment of the famed Greek myth, stands as one of the stronger entries in the ranks of Italian *peplum.*

As most will know, the original Minotaur is the half-human progeny of Pasiphae, Queen of Minos, and a sacrificial bull. Not surprisingly, this scandalous origin is not retold in this 1960 flick, nor is there much of an explanation for the provenance of the bull-man who haunts the labyrinth neighboring the Minoan city of Crete. Since there are few deities in MINOTAUR, the implication seems to be that the creature is just some freaky mutant who wandered into the cave, after which the Minoans decided he was a deity and that they would make annual sacrifices of virgin daughters to the creature. As the film begins, the custom is still going on even though King Minos' princess-daughter Phaedra has been exempt from the ritual.

Then as mother Pasiphae passes on, she reveals to Phaedra that the latter has a twin sister, Ariadne. Pasiphae feared that Ariadne might be sacrificed and so sent her away to some rural village, where she was raised without any knowledge of her royal heritage. Pasiphae dies, but Phaedra, who aspires to the throne, wants no sibling reunions, and sends a horde of mercenaries to kill everyone in the village.

By chance two heroes wander by just as the village is being attacked: the Athenian hero Theseus and the Minoan warrior Demetrio. After the two men rout the mercenaries, they take along Ariadne-- one of the few survivors of the raid-- to their original destination: Demetrio's home city of Crete. Theseus and Ariadne quickly fall in love, though Demetrio remarks on Ariadne's resemblance to the Princess of Crete. That's the last important thing he does in the film. Phaedra's agent escapes the rout of the mercenaries, returns to Crete ahead of the heroes, and lays a trap for them. Demetrio is killed, Ariadne is taken captive, and Theseus is hurled into the sea to drown. Thanks to the intervention of the sea-goddess Amphitrite, Theseus survives. There are a number of complicated palace-intrigues, in which Theseus tries to rescue Ariadne from her evil sister, Phaedra is killed, and Ariadne is forced to masquerade as her sister, At the climax Theseus is forced to descend into the labyrinth, and though he's not quite as "Herculean" as many peplum-heroes, he does manage to slay the beast and free Crete from superstitious ritual and tyrannical rule.

Compared to the original myth, the Italian treatment is a bit of a mix-master version. Ariadne and Phaedra are the daughters of Minos and Pasiphae in the original tale, but they're not twins. Phaedra has no role in the part of the story involving the Minotaur, and only re-enters Theseus' life long after he has (1) slain the Minotaur, (2) deserted Ariadne for vague reasons, despite her essential aid to him in the labyrinth, and (3) had a child, the male Hippolytus, by an Amazon named Antiope. At some point after all this, when Ariadne has gone on to a separate destiny, Theseus decides to marry her sister Phaedra, but Phaedra then performs her most significant mythic action by falling in love with Theseus's grown son Hippolytus, which of course leads to-- can you guess it?-- tragedy.

Clearly Ariadne and Phaedra in the film have been written to be the "good girl" and "bad girl" personae found in various earlier pepla, Some of these have presented a slight "mother-daughter" complex in that the "bad woman," usually a queen of some sort, is implicitly older. Here the same actress, Rosanna Schiaffino, plays both characters, so there's no actual age-difference. There's still a little psychological myth here, though, in that the mythic Ariadne is best known as a daughter-figure helping out a foreign-born hero, while mythic Phaedra has her greatest repute as a "bad mother" figure.

The presence of Amphitrite is a curious touch. She's not strictly speaking necessary to the plot: Theseus could have simply got washed ashore and gone about doing everything he does in the remainder of the film. In the best-known version of the Greek myths, Theseus is a demigod whose father was Poseidon, god of the sea with a special affiliation with Athens. The film doesn't allude in any direct way to the hero's divine status, but possibly such allusions made it in through the "back door," as it were. In late myth Amphitrite was made the consort of Neptune, the Roman version of Poseidon, though this Wiki essay argues that originally she had no connection with any male sea-god. Similarly, THE MINOTAUR has her appear to Theseus in her submarine palace as she seeks to make him her consort, which might have proved unfeasible if she had an unruly husband hanging around.

Why is the sequence in the movie? It does have the nice effect of playing up Theseus's utter devotion to his mortal love Ariadne, and it may be that one of the scripters thought it would be nice to do something along the line of Odysseus remaining in love with Penelope despite the blandishments of Circe. (True, Odysseus does remain in Circe's company for what one presumes was many nights of non-romantic sex, but hey, it's the thought that counts.) One also might view Amphitrite the immortal goddess as being, like Phaedra, another displaced mother-figure, although the goddess is gracious enough to let Theseus go once he refuses her. A final significant motif is that while Phaedra is defeated as are all evil queens of epic movies, her fate is particularly gruesome: a guard, trying to hit Theseus, hurls his spear right into Phaedra's face, and she stumbles to her death in a hyena-pit. It's at that point that Ariadne had to try to masquerade as her evil sister, but it's perhaps a credit to her sensitivity that she can't quite pull off the evil-queen vibe, and so is forced to aid the hero in other ways.

And if one has no interest in tracing myth-motifs, MINOTAUR is still a pretty lively film, with lots of fighting and three sexy women (albeit played by just two actresses).
Posted by Gene Phillips at 4:01 PM
Email ThisBlogThis!Share to TwitterShare to FacebookShare to Pinterest
Labels: combative adventures, the marvelous