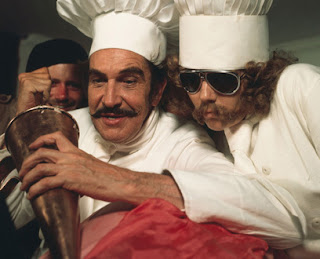 
Only Lionheart would have the temerity to rewrite Shakespeare!


I had forgotten that THEATER OF BLOOD was as lively a film as it is. It's far more entertaining than either of the DR. PHIBES films, and though it apes the basic formula of "perilous psycho killing people in imaginative ways," this was hardly a trope that the Phibes films invented. THEATER's black comic touches and its penchant for fast-paced action-- a stand-out being the villain's assault of a victim in a lengthy swordfight-- place it heads above most of Vincent Price's later films.

Many reviews have touched on one particular sociological aspect of the film: that the psycho-killer, Shakespearean actor Edward Lionheart, schemes to avenge himself on the critics who scorned his thespian talents by "critiquing" them to death. Specifically, he patterns the methods of death-dealing after some of the Bard's gorier deaths-- drowning one writer in a butt of malmsey (RICHARD III), or removing a "pound of flesh" from another fellow (MERCHANT OF VENICE, the "rewrite" mentioned in the quote above). However, for me there's much more pleasure in seeing this horror-film prick the balloon of High Culture, by reminding audiences just how extremely gory the super-literary Shakespeare could be. Director Douglas Hickox, who had completed another black comedy three years before (ENTERTAINING MR. SLOANE), excels here as much as does Price, and it's a shame Hickox. also known for co-directing THE GIANT BEHEMOTH, didn't try his hand at a few more horror-films.

Though Price has great presence in all of his scenes, most of the other actors get short shrift, particularly Diana Rigg, who plays Edwina Lionheart, the actor's faithful daughter and accomplice in his murders. At first it's not entirely clear that she's allied to her father's murderous cause, but once the script gets past this point of ambiguity, she gets to collaborate in many of the "designer deaths." However, she doesn't get much of a character, which is a shame, since Rigg was arguably at the height of both her fame and her thespian powers during this period. Strangely, the idea that the madman's daughter is utterly committed to his insane goals may be the biggest rewriting of Shakespeare in the film. In many Shakespeare plays he creates adult daughters of powerful men who defy their fathers by choosing to marry whom they please, or who refuse to bend to their paternal units in other respects. It's ironic that Edwina and Edward are joined together in a climax borrowed from KING LEAR, for Edwina, by doing everything her crazy father demands, repudiates the example of Cordelia, who refused to "love her father all."
Posted by Gene Phillips at 12:40 PM
Email ThisBlogThis!Share to TwitterShare to FacebookShare to Pinterest
Labels: bizarre crimes (u), perilous psychos (u), the uncanny