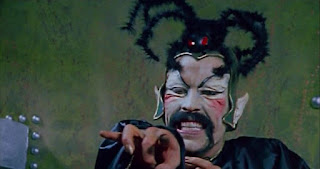 FLESH GORDON is a pretty good sex-comedy send-up of the Universal "Flash Gordon" serials. Reportedly Universal Pictures tried to block it with a plagiarism suit, and this may have engendered the prefatory title-card before the film begins, wherein the producers attempt to convince the public of their deep regard for such "superheroes" as Flash Gordon, Buck Rogers, Superman and Captain Marvel.

Though I'm sure the producers' main concern was to make a buck, FLESH has its moments if one takes it on its own terms as pure farce, without expecting to see any satirical barbs against the venerable space-opera of comic-strip and movie fame. The narrative's sole concern is to replay the familiar setups of the original 1936 serial-- albeit with a few touches taken from other FLASH movies-- and to jazz up their sexual content.

This isn't altogether inappropriate, for both the early comic strip and the first of the three serials are replete with tons of sumptuous sexual imagery. The other two serials and the strip in its later days become considerably toned down into simplistic space opera, but sexuality was a major part of the early FLASH. Note this tableau from the first serial, showing five of the main players: noble Flash, who wants Dale but who is desired by nasty Princess Aura, while to the side you see both Ming and Vultan, both of whom made unsuccessful assaults on Dale's chastity. 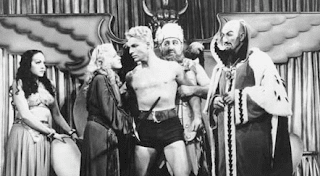 I mentioned that FLESH sometimes borrowed from later serials. The film doesn't parody the devilish Princess Aura, who seeks to seduce Flash away from Dale, but it does, strangely enough, reproduce a MAD-ized version of Queen Azura, who appeared in the comic in 1935, and in the second FLASH serial in 1938. The film gives viewers a "Queen Amora" who can magically vanish like the one in the 1938 serial, and who spirits Flash away from Ming's court, has sex with him, and then gets unceremoniously killed-- which made me wonder why the writers even bothered with her.

Of course, many of the jokes fall flat. I didn't mind that the film's version of Prince Barin is gay-- after all, his main role in the strip is to be Aura's consolation prize when Flash refuses her-- but "Prince Precious" just isn't funny. There are other predictable riffs: ships that look like phalli, "penisauruses," "rape robots," and a gigantic idol who comes to life and flashes the middle finger at his foes. It's all pretty routine, but happily the three main actors playing Flesh, Dale and Flexi play it generally straight, reacting to all the lunacy just as stolidly as the serial-characters. Jason Williams is a particularly good road-company Flash Gordon, and doesn't make the character sappy like the actor who took over the part in 1989's FLESH GORDON MEETS THE COSMIC CHEERLEADERS. Also, Flesh may be in a silly world, but he's given as much combative chutzpah as Buster Crabbe in his day, so this comedy falls into the combative mode.

Posted by Gene Phillips at 2:30 PM
Email ThisBlogThis!Share to TwitterShare to FacebookShare to Pinterest
Labels: combative comedies, the marvelous