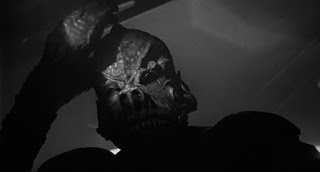 According to IMDB, IT! appeared in American theaters in the same month as CURSE OF THE FACELESS MAN.   Of that film I wrote:

Of director Edward L. Cahn's two collaborations with SF-writer Jerome Bixby. CURSE OF THE FACELESS MAN is the more mythically resonant movie, even though the other film probably gets the most press, often deemed as little more than : IT! THE TERROR THAT INSPIRED 'ALIEN!'I

It's often hypothesized that Bixby's script took some influence from A.E. Van Vogt's 1939 short story "Black Destroyer." In that tale, a spaceship from Earth lands on an alien world where all of the once-intelligent inhabitants have reverted to a "criminal state."  One of the creatures manages to get aboard the ship by seeming to be an unintelligent animal, but the alien exposes himself by his natural tendency to drain other organisms of their phosphorous content. The predator kills several of the spacemen but they eventually exterminate him and promise to do the same to his race.

Such a borrowing may be possible. But, given that Bixby's monster hails from the planet Mars-- albeit Mars in a "futuristic 1973," wherein Earth has conquered space-- it's also possible that both Bixby and Van Vogt borrowed from a more august source: H.G. Wells' WAR OF THE WORLDS. In that novel, Wells specifies that his monstrous aliens are a debased species of humanoid that have evolved into their tentacled forms over eons. Further, when they come to Earth, they sustain themselves by draining blood from humans-- a vampiric ability which was a logical antecedent to more specific examples of alien feeding-habits. For that matter, the 1951 film THE THING-- which is an influence named by Bixby in fan-interviews-- also includes the bloodsucking motif, though the alien is not a member of a barbaric race.

Bixby's setup of the Mars-Earth encounter begins with a military mystery. An opening narration by the main character describes Mars as a place "alive with something we came to know only as Death." Back on Earth, an official of the space-force then delivers exposition to a press-conference, detailing how Earth's first expedition to Mars ended in chaos, because one of the men apparently killed all of his crewmates once the ship landed. He adds that soon a second expedition will bring back the accused murderer for court martial.

The scene shifts to Mars, where the second expedition, made up of seven men and two women, lands and takes custody of Edward Carruthers, sole survivor of the first mission. Carruthers is also the only character with a little backstory, in that he is, within this fictional universe, the first man to be launched into space. Bixby's script doesn't exploit this potential, though, sticking with the basics. Carruthers protests that a Martian monster killed the other astronauts. Everyone believes that, because the ship couldn't take off again, Carruthers simply killed his crewmates so that he'd have sole access to the rations. There's even some apparent corroboration when the expedition's commander finds a human skull with a bullet hole in it, though Carruthers has a plausible explanation for this mishap.

Fortunately for Cartuthers' reputation, the same superstrong Martian who killed the other Earthmen stows away aboard the second ship, and begins preying on the crewmen for their precious bodily fluids. The vindication doesn't help Carruthers much, though, because the alien is invulnerable to bullets, gas grenades, and electricity. It's also intelligent, and at one point uses one of the crewmen as a "Judas goat" to draw forth more prey.

Limited though the spaceship set is, director Chan makes use of many inventive visuals in order to keep up maximum tension, and the creature's design is ferocious enough to overcome the inherent problems of a "man in a monster suit" peril. The film's greatest deficit is that all of the characters, including Carruthers, are generally dull, despite Bixby's introduction of mundane small-talk. Most of the time, the characters are in too much physical danger to make characterization an issue. But it's almost painful when Bixby tosses in a trite romantic subplot, wherein young female astronaut switches her affections from the mission-commander to Carruthers. The method for killing the monster is moderately inventive-- asphyxiating the Martian by venting the ship's air-- but it did make me wonder why the gas grenades didn't have any effect on him earlier.

Just so  the audience doesn't forget the earlier "Mars=Death" equivalence at the beginning, it gets repeated in the film's last line as well.