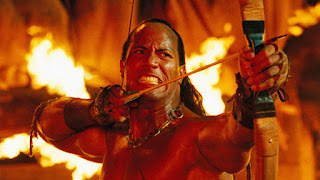 
As I observed in my review of 2001's THE MUMMY RETURNS, the idea of the "Scorpion King" franchise evolved from producers' generally successful attempt to mold wrestler Dwayne "The Rock" Johnson into a movie star. Johnson never again essayed the role of Mathayus, a Conan-like swordsman, though the character made three more appearances in DTV formats. This hero, who is a hideous monster in his one MUMMY movie, had a happier life in ancient times. He supposedly existed on a fantasy-Earth predating the rise of known history, although, as with Robert E. Howard's land of Hyboria, the hero's world sports place-names like "Gomorrah" and "Akkad."

I bestowed mild praise on MUMMY RETURNS because in it writer-director Stephen Sommers abandoned any attempt to make his "phony baloney" version of Egypt line up with the real thing. Sommers, one of the writers on KING, followed the same formula here, seeking to make a Conan for the 2000s. Naturally, the makers of the MUMMY series weren't able to pull off any of the deeper resonance found in Howard's prose, or even in the 1982 film. But then, it's unlikely that anyone even thought of doing anything but making a "fun barbarian" picture. Given that most post-Conan barbarian-films have proved dire, the producers did succeed in injecting a sense of loony fun into this genre-entry, aided by a much bigger budget this time round.

Mathayus is a thoroughly formulaic character, in that he starts out as an unprincipled master assassin but easily makes the switch to selfless hero with only a little guidance from his leading-lady, an oracle named Cassandra (Kelly Hu). Like most such heroes, he attracts allies to his banner without half trying, though he does have to fight one Balthasar (Michael Clarke Duncan) in order to earn that warrior's respect. Johnson brings a lot of verve to the character, though, and that makes up for lack of depth. The film's only Campbellian function is sociological, in that the plot depends on a clash of bizarre cultures.


Posted by Gene Phillips at 2:30 PM
Email ThisBlogThis!Share to TwitterShare to FacebookShare to Pinterest
Labels: combative adventures, the marvelous