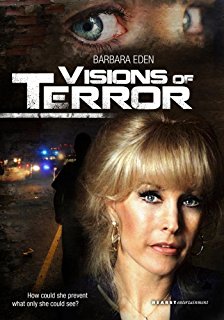 These two TV-films-- made about a year apart, and with no creative personnel in common except for star Barbara Eden as a "psychic psychologist"-- are pedestrian in execution, though the first film boasts some interesting potential.

Over the years I've seen quite a few films in which some character, often a female, acquires or discovers psychic powers. These abilities prove onerous in that the character becomes embroiled in solving some dastardly crime.  VISIONS takes an interesting tack in that psychologist Jesse Newman (Eden) doesn't have the usual generalized powers, but a ability to tune in on a specific person to whom, unbeknownst to Jesse, she's actually related. A parapsychologist calls this "interpersonal resonance," and it makes for a good restriction on the usual psychic tropes.

The script labors mightily to make Jesse into a worthy heroine, a self-sacrificing professional who becomes too deeply invested in the problems of her patients. This martyr complex is grounded in the fact that she and her then-husband Hal-- now her ex, as well as a cop-- lost their only offspring sixteen years ago in childbirth. It later turns out that the daughter was actually abducted and sold to a black-market adoption agency, and that she's the reason Jesse starts having psychic flashes of peril to young Kimberly and her adoptive mother, at the hands of Kimberly's adoptive father (the reliable Terry O'Quinn, striving to find something to do with his underwritten part).

In fact, VISIONS is the very definition of a "star movie," in that no character in the story has anything interesting to do except  the protagonist. The same thing applies to the sequel EYES OF TERROR, altered in syndication to VISIONS OF TERROR. Since the first script shot its bolt by making Jesse's abilities dependent on her daughter, the second film decides to invest her with the skill of psychometry, the ability to glean psychic visions by touching objects. Despite this enhancement of Jesse's abilities, her most impressive feat herein is that of doping out a special code that leads her and the police to a cop-killer. The ex-husband is jettisoned and the daughter is played by new actress Missy Crider, who gets a little more development this time out. In fact, she possesses minor judo skills that enable her to fight the villain better than her mom can.

Some actors, no matter how technically proficient, never have it in them to attempt serious drama, just as many never conquer the realm of comedy. Barbara Eden, indelibly associated with the role of Jeannie from her best-known teleseries, never disappointed this viewer whenever she worked in any other light-comedy vehicle. No matter how bad the vehicle, her comic timing and insouciance always persuaded. In contrast, Eden doing dead-serious roles always seems earnest but never heartfelt, and these two meager telefilms prove no exception. (Note: she's nominally more serious in her character for SEVEN FACES OF DOCTOR LAO, but it's still dominantly a comedy, and thus her talents still fit that particular mold better than any of her attempts at "straight" drama.)
Posted by Gene Phillips at 2:06 PM
Email ThisBlogThis!Share to TwitterShare to FacebookShare to Pinterest
Labels: the marvelous