ONE BODY TOO MANY is one of a handful of programmers designed to test Jack ("Tin Man") Haley's potential as a lead comic actor. BODY is probably the only one of his comedies that anyone remembers today, but it's because of his supporting co-stars, the inimitable Bela Lugosi. Bela doesn't have a lot to do, as this is another of his "red herring" roles, but the script does provide him with one worthwhile running gag. That's more than most such roles afforded the actor. For good measure, he also gets a scene in which he loftily puts down Haley's character, a frazzled insurance salesman pulled into solving a mystery.

Like many such "old dark house" programmers, this was revolves around the death of a rich patriarch, and what his heirs do to compete for his legacy. The mystery isn't memorable, but at least the film fits well into my "weird families" motif. After the patriarch's death, the heirs have to stick around the mansion while arrangements are made for the late man to buried in a glass coffin so that he can be turned to "look at" the stars at night. The other members of the dead man's family aren't especially weird, and even Lugosi's red-herring isn't as creepy as usual. Watch it for Bela and forget the rest. 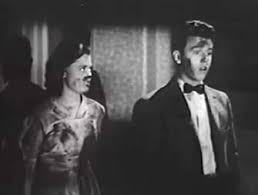 HAUNTED HOUSE, as a few IMDB reviewers have pointed out, has no haunted house in it, nor is it metaphenomenal in any way. It's a mild story in which two teenagers in an Andy Hardy sort of town-- a copy body and the niece of a newspaper's editor-- set out to find a murderer. The courts have condemned a nice old man known to the copy boy, so the young man doesn't believe he's guilty, and the niece agrees with him because she likes the copy boy. Not surprisingly, the teens show up their elders.

There is a tiny justification of the title in one scene-- shown above-- wherein the two teens explore the house of the murder victim at night. They half-convince themselves that the house is "haunted" by the victim's ghost, though there's no evidence for this whatsoever. So this is a naturalistic "phantasmal figuration" of the sort I've examined in my review of HAUNTED RANCH.
Posted by Gene Phillips at 1:38 PM
Email ThisBlogThis!Share to TwitterShare to FacebookShare to Pinterest
Labels: phantasmal figurations (n), the naturalistic, the uncanny, weird families and societies (u)