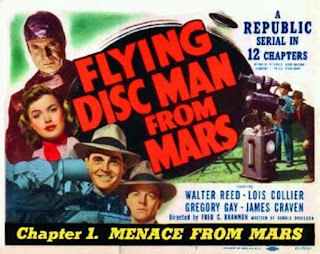 FLYING DISC MAN is a quasi-sequel to THE PURPLE MONSTER STRIKES, but only because it recycles the same basic idea-- Martians coming to Earth and collaborating with America's enemies-- and the costumes. DISC MAN is directed by Fred C. Bannen, who was one of the two helmsmen credited with PURPLE MONSTER, and is written by Ronald Davidson, credited as the PURPLE producer.

Yet, though PURPLE MONSTER is just an average serial, DISC MAN seems to go out of its way not to live up to its predecessor's modest accomplishments. It's not that surprising that the new serial does away with the Martians' propensity for "body-snatching," as this was probably an extra expense and the 1950 serial was already recycling scenes from its predecessor and from other serials. But whereas PURPLE MONSTER had several writers assigned to think up new perils for the heroes, Davidson wasn't even able to think of one good setup-- much less distinguishing his characters. Serial heroes and heroines are not exactly scintillating personalities at the best of times, yet the characters essayed by Walter Reed and Lois Collier impressed me as two of the dullest ever.

The only element that was even remotely exciting was the appearance of the "disc" of the title, which is the Martian spaceship-- and that's recycled from the 1942 serial KING OF THE MOUNTIES. 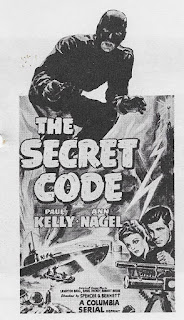 THE SECRET CODE, made at the height of U.S. involvement during the Second World War, is at least average entertainment.  Like a number of other 1940s serials, it starts with a bang, as policeman Dan Barton is accused of being a collaborator. His betrayal is really a put-up job, though, so that Barton can infiltrate a spy ring endangering U.S. security. The first episode even has a moment in which Barton's best friend is tempted to shoot the supposed traitor, but gives in to his instincts about Barton's essential decency and becomes the undercover agent's confidante. Further, so that Barton can act against the spies without endangering his status, he assumes the masked, black-clad identity of the Black Commando-- thus making for a lot of fights in this knockabout serial. CODE's biggest weakness is the same as that of many wartime serials: an undistinguished collection of espionage villains. Because the plot partly concerns an attempt to break the enemy spies' "secret code," each episode ends with an official of U.S. "military intelligence" explaining examples of code-breaking to the audience. Fortunately, modern viewers, unlike theater-goers in 1942, have the option of ignoring these tedious propaganda lectures.

On a side-note, because the serial fell into public domain (or was believed to have done so), the Black Commando showed up later as a comic-book character for Bill Black's AMERICOMICS line.
Posted by Gene Phillips at 3:21 PM
Email ThisBlogThis!Share to TwitterShare to FacebookShare to Pinterest
Labels: combative adventures, outre outfits (u), the marvelous, the uncanny