THE REVENGE OF FRANKENSTEIN (1958) 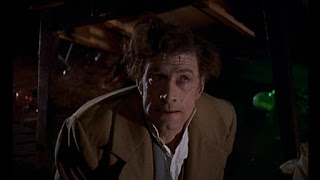 
THE CURSE OF FRANKENSTEIN isn't even close to one of my favorite Frankenstein films. However, it certainly eclipses most of the slapdash sequels, particularly REVENGE, even though Hammer used the same writer and director to bring the mad baron back from death.

The film begins well enough, with one petty thief trying to convince another to help him rob the grave of Doctor Frankenstein, executed at the end of the previous narrative. The business between the reluctant thief and his con-man acquaintance provides the film's only comic relief, but the grave-robbers' scene is only designed to provide the explanation for the baron's return. The thieves find that the coffin of Frankenstein actually contains the headless body of a priest, who was somehow substituted for the Baron on the guilloutine. The reluctant burglar wisely flees, but the greedy one sticks around, and promptly gets a heart attack when he sees Baron Frankenstein himself show up at the gravesite, in the company of the usual hunchbacked aide. It's loosely implied that the Baron has showed up here to raid the graveyard for parts, but it seems pretty counter-intuitive for even a madman to show up at the same place where he's supposed to be buried, not even wearing any sort of disguise. This is particularly egregious since the Baron is masquerading as "Stein," a doctor to the poor in what I assume is the same city

In CURSE, the scientist was aided by an older mentor-figure, who harbored some ideals about using Frankenstein's ideas for the betterment of mankind. This time Frankenstein plays the mentor, for a younger medical student, Hans Kleve, reveals that he's figured out the true identity of Stein. Kleve wants to join Frankenstein in his endeavor, and the scientist accepts the younger man's offer with scarcely the turn of a hair. This presumably gives Frankenstein someone to talk to besides his hunchback, a peer with whom he can discuss his next project: to transfer the brain of the deformed assistant into a new body, once again cobbled together from multiple sources. Karl is only too happy to leave his ugly old body behind, though once the operation takes place, the former hunchback wants to simply return to normal life, rather than being Frankenstein's ongoing showpiece.

The doctor boasts that this time the procedure will succeed because he's not using a "bad brain." However, for reasons the script does not explain, Karl's new body begins taking on the same deformities as his original form. The production chooses to "cheap out" on the appearance of the Monster, leading to many other Hammer-monsters of unprepossessing appearance.

The monster pursues romance, causes a little havoc, and exposes Frankenstein to the public. Though the mad scientist meets his comeuppance, this time Sangster's script gives him a rationale-- however improbable-- so that he can go on to future installments-- which he did, generally to even more unimpressive results.
Posted by Gene Phillips at 3:48 PM
Email ThisBlogThis!Share to TwitterShare to FacebookShare to Pinterest
Labels: the marvelous