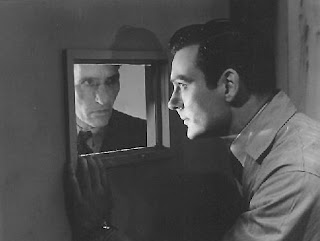 In my review of Republic Studio's 1937 DICK TRACY serial, I mentioned that its idea of pitting the comic-strip police detective-- upgraded to a "g-man" by Republic-- against a virtual "supervillain" went very much against the content of the strip. The closest thing the strip had to a masked marauder was a fellow called "the Blank," and he didn't appear until October 1937, roughly ten months after the serial-Tracy contended with "the Spider."

DICK TRACY RETURNS is closer to the general content of the comic strip during the 1930s, wherein most of the villains were fairly down-to-earth, lacking the freakish features that predominated in Tracy villains from the 1940s and thereafter. In RETURNS, G-man Tracy pursues the Stark Gang, six ruthless professional crooks always garbed in plain clothes, and consisting of leader Pa Stark (Charles Middleton) and his five sons. Only in a handful of the serial's fifteen chapters does metaphenomenal content arise. In an early chapter, the Starks get involved in trying to steal the army's new radio-transmitter for the benefit of a foreign power, which would seem to indicate the extent to which even pre-war America anticipated getting pulled into the World War abroad. The invention, which seems to be the same as a later-discussed invention that combines elements of a telescope and a television, would seem to fall into the domain of the uncanny, though it functions as no more than a basic "McGuffin." Most of the time the Starks use only commonplace weapons, but in one episode, they booby-trap Tracy with a flash-camera gimmicked with tear-gas-- and this scene provides slightly better justification for gauging the serial's phenomenality as uncanny.

Such matters aside, the bulk of the serial focuses on the numerous schemes of the Starks and the efforts of Tracy and his fellow g-men to trap the crooks. As in the previous installment, the villains don't have one overriding plan, but continuously come up with new plots, usually oriented on simply making money. Middleton, who gained a measure of cinematic immortality as "Ming the Merciless" in FLASH GORDON, makes a good foil for Ralph Byrd's Tracy, particularly when, as the serial progresses, Pa keeps losing son after son to G-men gunfire. Still, given Republic's concentration on fistfights and car-chases, the potential melodrama is never realized. Still, at least all of the Stark boys are given some individuality, which is more than one can say of Tracy's assistants, particularly a rather pusillanimous version of Tracy's kid-ward Junior. 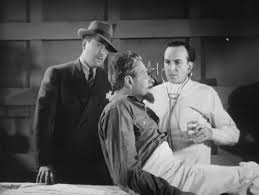 DICK TRACY'S G-MEN follows much the same pattern, except that the first and the fifteenth episodes of the serial are far better than everything in between. This time, Tracy's opponent is a full-fledged enemy agent with the rather devilish name of Nicholas Zarnoff (Irving Pichel). Zarnoff makes his debut as starring villain in a most improbable manner, for he's imprisoned in a jail cell, waiting to die for his crimes. Tracy appears on the other side of the bars, and when Zarnoff asks if the g-men thinks he Zarnoff is afraid of death, Tracy replies:

"No, Zarnoff, you probably hold the same contempt for it that you held for the lives of others."

Thus the gauntlet is thrown down between Tracy, representing the forces of life, and Zarnoff, who is contemptuous of death and life alike. But before his execution, Zarnoff ingests a special chemical, and seems to die ahead of time. After his apparent passing, his agents revive him, and Zarnoff tells them that the death-chemical was the legacy of the "alchemists of Satan." Though in real history alchemists are not identical with Satanists, this section makes Zarnoff seem as if he's technically in league with the forces of evil, rather than just being a simple enemy agent. Indeed, the master spy makes an ambiguous remark about having "lost" some vital ingredient of his being because of using the devilish chemical-- though the allusion to sacrificing one's soul is never developed.

After this phenomenal opening, the serial settles into familiar territory, as Tracy continually prevents the spy's schemes of murder and sabotage. Regrettably, the serial makes heavy use of the practice of re-running previous scenes in order to recap earlier events, thereby saving the studio money and gypping contemporary viewers who actually followed the serials from episode to episode. However, G-MEN makes up for this debit with one of the strongest endings to any sound serial, when a crashed plane strands both Tracy and his quarry in a burning desert, where only one can survive.

Byrd is as good here as in any of his other Tracy serials, but Pichel is the real treat. He dominates every scene he's in, as much because of his presence as his Satanic-looking goatee, and for me at least ranks as one of the top ten villains of sound serials.
Posted by Gene Phillips at 3:11 PM
Email ThisBlogThis!Share to TwitterShare to FacebookShare to Pinterest
Labels: combative adventures, diabolical devices (u), the marvelous, the uncanny