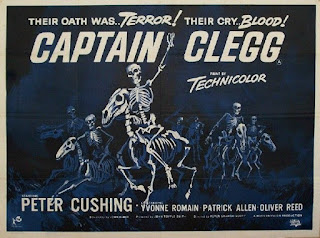 
Since writing these two reviews, I've still not read any of the original Russell Thorndyke novels about the early quasi-superhero "The Scarecrow," a.k.a. "Doctor Syn." The character-- a former pirate named Clegg, who escaped his alleged death and became a parson in a small English village-- might be closer to a "villain" than a "hero," albeit a very benign villain. In the same way that Robin Hood fought the soldiers of the king to benefit the poor, Syn-- who is renamed Doctor Blyss in the 1962 film-- is out to better the lives of Romney Marsh's citizens by helping them smuggle wares in and out of the country. The local lawmen don't like this, just as the soldiers of King John resented Robin Hood's incursions, and on this hinges the conflict-- though Clegg/Blyss adds one touch that the lord of Locksley never thought of; having his merry men dress up in phosphorescent ghost-costumes to scare off the curious. However, one other major difference is that Robin Hood's opposition to the legal authorities comes to an end when King Richard returns and kicks John out. Within the context of the Thorndyke setup, smuggling will always be illegal, and so Blyss can only keep fighting the law until it kills him-- which, to drop a very minor spoiler, is exactly what transpires.

Since the plot-action of CLEGG is pretty close from that of the 1937 DOCTOR SYN, I won't repeat the specifics of the plot. Suffice to say that a new officer comes to Romney Marsh with the intent of rooting any and all smugglers. No one in 1962 or since is likely to doubt that the serene-looking parson Blyss (Peter Cushing) is really behind all the skullduggery, nor that the two young lovers Harry and Imogene (Oliver Reed, Yvonne Romain) are destined to come together despite all odds. In one way Hammer's version is racier than that the 1937 adaptation: in both films an older man, who has functioned as a not-very-paternal guardian to Imogene since her childhood, puts the moves on his ward, revealing her tainted past so that she'll marry him. But the Hammer film plays the scene with more attempted bodice-ripping.

In terms of acting, Peter Cushing could do this simple swashbuckling-role in his sleep. The best scenes involve the limber actor showing off his fighting-skills against a bulkier opponent, and later trying to escape the constables at the film's finish. The film's visuals are both stark and evocative, particularly in the scenes with the "phantom horsemen." CLEGG is certainly the most watchable of the three adaptations.
Posted by Gene Phillips at 3:39 PM
Email ThisBlogThis!Share to TwitterShare to FacebookShare to Pinterest
Labels: combative adventures, outre outfits (u), phantasmal figurations (u), the uncanny