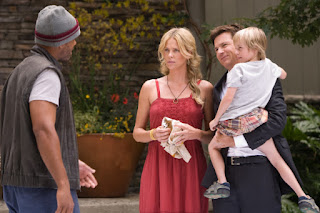 
The only other time I watched HANCOCK, I didn't care for it, probably because of the problematic plot-elements that resulted in mixed reviews after the film's cinematic debut. But on re-assessment, I think that though the plot still has a few dodgy aspects, it's a pretty smart riff on the Superman myth.

In the first few years of the DC comics-feature, Superman was the only Kryptonian on Earth, and not for many years did the character come in contact with another survivor of his homeworld. He occasionally battled villains who equaled him in strength, but clearly the main emphasis was on showing what would happen when a Good Samaritan with the power of a demigod walked among men.

Hancock (Will Smith) is another such demigod. At the start of the film, he's been hanging around Los Angeles for several years, and so they've become inured to the spectacle of a man who can fly, lift incredible weights, and bounce bullets from his skin. However, though Hancock stops crimes like a stereotypical superhero, he manages to inflict massive damage to the city whenever he does so. Thus the Angelenos curse rather than praise their resident superhuman-- except one man. After Hancock saves Ray Embrey (Jason Bateman) from death, Ray-- a public relations specialist-- repays him by trying to reform his image with the public.

Some iterations of Superman start from the premise that the hero didn't even know the provenance of his powers until late in life. Hancock is in a similar situation, for he has no idea where his powers came from, nor who he was in earlier life. His earliest memory is that of being treated in a hospital for an assault, one that apparently affected him as it would any other mortal man. In the hospital he suddenly demonstrated his vast powers, and he derived his name from a check-out nurse who asked him to put his "John Hancock" on a release form. He doesn't have the first idea how to blend in with humanity, living apart from others in a humble trailer, and only coming forth to stop crimes-- always with destructive results. Ray is apparently the first person to approach Hancock as a friend, inviting him to dinner and introducing Hancock to his wife and kid-- though wife Mary (Charlize Theron) takes an instant dislike to the reckless hero.

Ray talks Hancock into humbling himself to the system, allowing the courts to put him in prison for his misdeeds-- with the expectation that soon enough, some major crime will erupt and force the local cops to offer Hancock amnesty in exchange for his help. This happens a little too easily, but it's made satisfying by the way Ray plays "Professor Higgins" to the hero, getting him to curb his raw impulses and to show appreciation for ordinary humans. Still, Hancock's time in prison reveals the source of his reckless nature: he feels traumatized because no one ever came looking for him in the hospital. A part of him wants to help other people, but another part is an angry child lashing out at normal society.

However, Hancock isn't quite the only one of his kind. The latter half of the film reveals that Ray's wife Mary had a past with the amnesiac Hancock. This section is the source of the film's plot-problems, which inhere in the fact that the director and writers didn't want to deal with specifics about their super-beings. Both Hancock and Mary are immortals who have existed for centuries, and though Mary doesn't suffer from amnesia, she doesn't know much more than Hancock about their origins. She says that they may be "gods or angels," and that they were created in pairs, though all of their brethren have died long ago. This is because whenever two super-beings, they act like kryptonite on one another, gradually removing one another's powers. (The script is pretty vague about how long this takes: Mary displays some kick-ass powers when she gets into a fight with the hero, but at the climax they both start to lose powers when it's important to keep up the tension, and their power-loss immediately reverses itself the moment Hancock puts some distance between him and Mary.)

Still, the strong acting by Smith, Bateman and Theron puts across an emotional core that overcomes the plot-problems. Hancock desires Mary even before he knows her true nature, and she hasn't forgotten their torrid past, even though she loves Ray now. In the end Hancock becomes once more the solitary superbeing, to whom ordinary life and love are denied, and who can only find fulfillment in being a full-time, crime-smashing badass. There was some talk of a sequel, but I for one think that the dramatic arc was concluded so well that the characters have nowhere else to go.
Posted by Gene Phillips at 3:24 PM
Email ThisBlogThis!Share to TwitterShare to FacebookShare to Pinterest
Labels: combative dramas, the marvelous